Fast and furious: a look at the death of animals on the highway MS-080, Southwestern Brazil

Several factors, such as hunting and the pet trade, are responsible for the worldwide decline of wildlife populations. In addition, fatal collisions with vehicles on highways have also taken one of the largest tolls. This study aimed to quantify the richness and abundance of vertebrate roadkill along highway MS-080 in Mato Grosso do Sul, Central-West Brazil. We compare the amount of roadkill to the distance between cities, moon phases and the flow of vehicles on the highway. Samples were collected weekly between March and September 2011, totaling 257 individuals, belonging to 32 families and 52 species, resulting in an index of 0.13 individuals hit/km. Birds were the most frequently hit taxa, followed by mammals. The most affected species was Cariama cristata (Cariamidae), followed by Cerdocyon thous (Canidae). The sections of highway closest to cities had the highest number of individual animals killed. Our observations indicate that the density of the vegetation next to the highway positively influences the amount of roadkill. 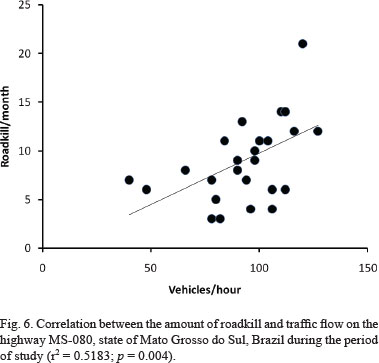 SciELO Analytics
Dimensions
Altmetric
Scite_
Fast and furious: a look at the death of animals on the highway MS-080, Southwestern Brazil
PlumX