Endozoochorism is one of the most important processes of seed dispersal in tropical rainforests, mostly dependent on birds and mammals, whose digestive systems cause chemical scarification and germination of the seeds passing through. The opossum Didelphis albiventris Lund, a small a small omnivorous and noctivagous mammal that feeds, among other plants, on Rapanea ferruginea (Ruiz et Pav.) (Myrsinaceae), an evergreen tree, heliophile, pioneer and hygrophilous. Considering the acknowledged importance of mutualistic dispersive processes, the aim of this experiment was to evaluate seed germination that passes through the digestive system of D. albiventris. The seeds were submitted to 6 treatments: (1) Controlling Group - non-treated seeds; (2) Sandpaper Group - scarificated seeds; (3) Digestive System Group - seeds that passed through the animal's digestive system; (4) Group pH 2; (5) Group pH 3; (6) Group pH 4. The results indicate that the scarification process is necessary to obtain higher germination rates and velocity for the studied species. The sandpaper treatments reached significantly different results than the Controlling Group, although it was lower than the others treatments. The Digestive System Group had the higher germination rate and velocity. These results indicate that D. albiventris can be considered a frugivorous inductor of R. ferruginea's germination rates and velocity. 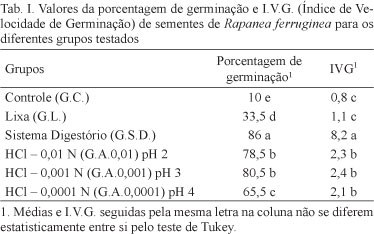