Rodrigo A. A. Muñoz

Dipyrone (DIP), also known as metamizole, is one of the most popular analgesic and antipyretic drug with proven efficiency in pharmaceutical formulations.1 After oral intake, it is rapidly and spontaneously hydrolyzed in the gastric fluid to its active metabolite, 4-methylaminoantipyrine (4-MAA), which is absorbed in this form (prodrug).2,3 Despite its potential side effects, DIP is widely used in both pediatric and adult patients due to its strong analgesic effect, low-cost, and unrequired prescription in Brazil.2

Caffeine (CAF) in combination with DIP is used as an analgesic adjunct to enhance pain relief, although CAF has no analgesic effect.4,5 In some pharmaceutical formulations, DIP is also present in association with orphenadrine (ORP), scopolamine (SCO), and mepyramine (MEP). ORP is an analgesic with weak antihistaminic property, useful for relieving pain associated with traumatic or inflammatory muscle contractions.6 SCO is an antimuscarinic agent commonly used as an analgesic and a smooth muscle relaxant. It is also used as an antispasmodic agent with antinauseant effects, and is recommended for use in the treatment of motion sickness and in pre-surgery medication.7 MEP is a drug which neutralizes the excess of histamine exerting inhibitory action on spasms.8 Some cold and flu drugs are formulated in two tablets, one containing the main active ingredients (DIP, CAF and MEP) and another with ascorbic acid (vitamin C, AA).9 It is recommended to the patient that both tablets should be consumed simultaneously for satisfactory treatment.

A common problem all over the world is the counterfeit of pharmaceuticals used by humans and animals. The use of these drugs without suitable quality control represents a risk for the health of people. Consequently, the analysis of pharmaceutical formulations aims not only for the industrial quality control, but also to verify the suitability of the products.10 Several analytical methods have been developed for the simultaneous determination of some of these compounds (targets of this study), such as DIP and AA,11,12 DIP and CAF,13-15 CAF and AA,16-18 and CAF and MEP.19 A single work using near infrared spectroscopy and chemometric tools was described to classify tablets containing simultaneously DIP, CAF, and ORP, but no quantifications were performed by this method.6 To our knowledge, there are no analytical methods reported in the literature for the quality control of these commercially available pharmaceutical formulations with the following compositions: (i) SCO + DIP; (ii) ORP + CAF + DIP, and (iii) MEP + CAF + DIP + AA.

Capillary electrophoresis with capacitively coupled contactless conductivity detection (CE-C4D)20, 21 is a powerful separation technique which has been widely used for the separation and detection a large number of compounds.22 C4D is a conductivity detector (universal characteristics) where the electrodes are not in direct contact with the measured solution.23,24 Therefore, the CE-C4D system can be considered a versatile set because all charged species can be detected.23,25 In addition, the use of the CE-C4D system allows the development of analytical methods with several desirable characteristics, such as short analysis time,26-29 low cost, high separation efficiency, and low consumption of reagents and samples.22

In this paper, we report a new, simple, low-cost and fast CE method for the analysis of three different pharmaceutical formulations containing two or more of active ingredients including SCO, ORP, MEP, CAF, DIP, and AA.

The experiments were performed using a homemade CE instrument with two compact and high-resolution capacitively coupled contactless conductivity detectors (CE-C4D).23,25,30 In this version of detector, the potential (4-Vpp) and frequency (1.1 MHz) are constant (no optimization is required). The detectors were positioned along the capillary at 10 cm from each end. The polyimide-coated fused silica capillary used in all experiments was 40 cm long (effective lengths of 10 and 30 cm from the injection side) and 50 µm i.d. × 375 µm o.d. (Agilent, Folsom, CA, USA). All experiments were carried out using the first detector (effective length of 10 cm). Prior to use, at the beginning of each day, the capillary was flushed with deionized water for 10 min, 0.1 mol L-1 NaOH for 15 min, deionized water again for 10 min, and finally with background electrolyte for 10 min. The samples were injected hydrodynamically for 0.5 s at 25 kPa. All experiments were carried out by applying +25 kV as separation voltage (injection side). Figure 1 shows the scheme of the configuration of the CE-C4D instrument used in the proposed work.

In this study, the target group of analytes were AA (pKa = 4.4 and 11.2), CAF (pKa = 0.6 and 14), DIP (pKa = 1.2), MEP (pKa = 8.8), ORP (pKa = 8.9), and SCO (pKa = 7.8). Due to the existence of synergistic effects, pharmaceutical products containing either DIP or a mixture containing one (DIP + SCO), two (DIP + CAF + ORP) or three (DIP + MEP + CAF + AA) active pharmaceutical ingredients can be found commercially available. According to their pKa values, almost all compounds (except to CAF) can exist in their ionic form in aqueous solutions in the pH range (3 to 12) commonly used in capillary zone electrophoresis (CZE). AA and DIP exist in their anionic forms and MEP, ORP, and SCO in their cationic forms. In order to carry out the complete analysis in a single run, a condition that allows simultaneous separation of cations and anions needed to be used. The strategy adopted in the present work for fast determination of these compounds using a regular CE system was the use of high-magnitude normal electroosmotic flow  EOF (pH > 7.5; fused silica capillary column). In this condition, cations are carried to the detector in co-EOF-mode (EOF + electrophoretic mobility) and anions with low mobility in counter-EOF-mode (EOF mobility >> analyte electrophoretic mobility) and can be detected immediately after the EOF marker (C4D). However, CAF is a neutral species in the pH range commonly used in CE and, to our knowledge, its analysis is only possible by capillary zone electrophoresis if DMX is used in the BGE composition in order to generate an anionic complex.31 Briefly, CAFDMX forms an anionic complex (association constant = 15.7 kg mol-1) and can be described as a 1:1 hydrophobically bound π-molecular complex, similar to CAFchlorogenate.32

Different BGEs containing DMX and with buffering capacity around pH 8.0 were tested for this purpose (DMX/Tris, DMX/histidine and DMX/TEA). Among these, the BGE composed of 12 mmol L-1 of TEA and 10 mmol L-1 of DMX (pH = 8.5) presented a better performance. Figure 2 presents electropherograms of standard solutions containing (A) SCO and DIP (0.50 and 1.5 mmol L-1, respectively), (B) ORP, CAF, and DIP (0.75, 1.5, and 1.5 mmol L-1, respectively), and (C) MEP, CAF, DIP, and AA (0.75, 1.5, 1.5, and 2.0 mmol L-1, respectively). This study was carried out with solutions with three different compositions, in accordance with the presence of their active ingredients in three different commercial pharmaceutical formulations. Typical electropherograms for the analysis of three different pharmaceutical samples (diluted appropriately in water) with similar composition to the respective standard solutions are also presented in Figure 2. In all the electropherograms, COD (0.70 mmol L-1) was used as internal standard (IS).

As can be observed in Figure 2, the electropherograms of the analysis of the three sample solutions are very similar to the electropherograms acquired for its respective standard solutions. Furthermore, it can also be seen that the migration times of MEP, ORP, and SCO are very close, and therefore, if these compounds are present in the same solution, no adequate resolution will be obtained. However, to our knowledge, these compounds are not commercially available in the same drug formulation. Therefore, the CE-C4D methods here proposed can be used for quality control of these specific samples.

The effect of the applied separation voltage (+15 to +25 kV) and the hydrodynamic injection time (from 0.3 to 1.5 s) were also studied in order to obtain the best instrumental conditions in the CE experiments. The applied potential of +25 kV and the injection time of 0.5 s (25 kPa) yielded the best compromise in terms of efficiency separation, resolution, signal-to-noise ratio (SNR), and analysis time. In the next step, the precision of the proposed methods were evaluated by ten consecutive runs of standard solutions containing similar composition of the three commercially available samples (Figure 3). The results obtained for each standard solution in the same day and with the same capillary column length were considered as intra-day precision and the results obtained for each standard solution in different days and with different column lengths (40 ± 5 cm) were considered as inter-day precision. Table 1 shows the obtained results.

The analytical parameters obtained from the results presented in Figure 4 are shown in Table 2.

It was observed a good linearity for all analytes in their respective concentration ranges (r > 0.993). In addition, the obtained limits of detection can be considered adequate for pharmaceutical samples analysis, since low detection limits are not required. Table 3 shows the results obtained for the analysis of three pharmaceutical samples with their respective standard deviations (n = 3).

As can be observed, the obtained results were similar to those reported in the package insert (label values) and suggest that the composition of the pharmaceutical samples was correct.

In addition, in order to evaluate the accuracy of the proposed methods, recovery tests using pharmaceutical samples individually spiked with each analyte were also performed. In this study, samples were diluted appropriately and analyzed without and with the addition of 0.20, 0.50 or 1.00 mmol L-1 of each analyte. The recovery values for the spiked samples are shown in Table 4.

Recovery values from 95% to 103% were obtained for most analytes, which indicated the absence of matrix interference and can be considered adequate results for pharmaceutical samples. However, recovery values less than 95% were obtained for DIP and AA. This probably occurred because both compounds easily undergo hydrolysis or degradation in aqueous solutions.33,34

Additionally, the results obtained with the proposed CE-C4D method were compared with previous studies also conducted with separation techniques, as liquid 13 and gas chromatography,19 and micellar electrokinetic capillary chromatography (MEKC).18 Firstly, it is important to emphasize that these methods only allow simultaneous determination of some of these compounds, as DIP and CAF,13 CAF and AA,18 and CAF and MEP.19 Only the CE method here proposed enables the quality control of the three pharmaceutical samples with the corresponding composition: (i) SCO + DIP, (ii) ORP + CAF + DIP, (iii) MEP + CAF + DIP + AA. The linear ranges and detection limits obtained with the proposed CE method are higher to those reported in previous studies using chromatography,13,19 and similar to that obtained by MEKC.18 For this reason, the proposed CE method, if compared with chromatography, has disadvantages for analysis of samples with low concentrations of the target molecules (ca. in biological samples). However, in pharmaceutical analysis, low detection limits are often not required. In addition, the new CE-C4D method proposed here is faster (60 h-1) than chromatography (7 h-1)13 and MEKC (6 h-1)18, less expensive (use of homemade CE equipment), and has significantly lower consumption of samples and reagents than chromatography.

A simple and low-cost CE-C4D method for fast determination of DIP in the presence of other five active ingredients (SCO, ORP, MEP, CAF, and AA) was developed. To our knowledge, it is the first time that an analytical method is proposed to separate and quantify all these compounds. The new CE-C4D method have several desirable features, such as short analysis time (less than 1 minute per analysis), low reagents and samples consumption, good precision, and simple sample preparation steps (dilution + filtration). In the proposed work, a homemade CE instrument with a low cost detector was used, therefore, it can be regarded as a low-cost analysis system. 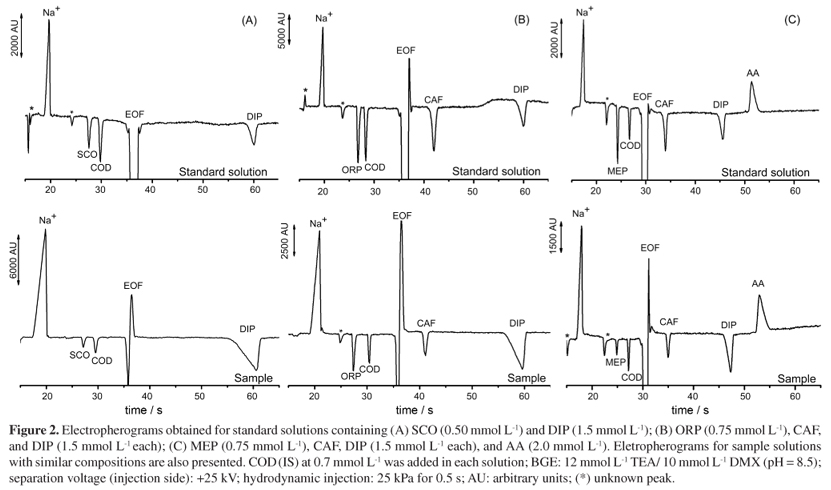 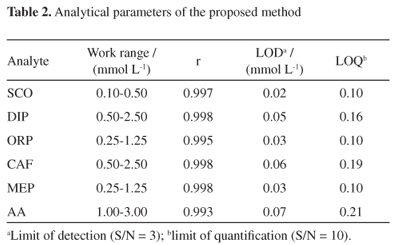 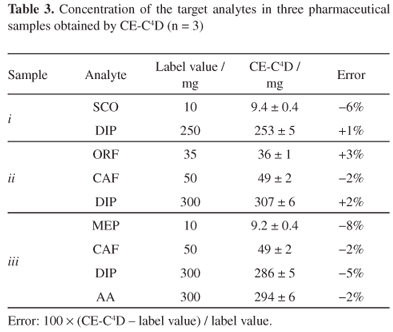