A flow-injection spectrophotometric procedure was developed for screening organophosphorus pesticides. The method is based on the inhibition of acetylcholinesterase immobilized on controlled porous glass beads with acetylcholine chloride as the substrate. Methyl parathion, chlorpyrifos, malathion and dichlorvos have been tested. The analytical peak height for a given acetylcholine chloride concentration correlates linearly with the logarithmic concentration of the pesticides between 1.0 × 10-3 mol L-1 and 1.0 × 10-6 mol L-1. If bromine water is added to the pesticide solution, a dramatic increase is observed in the analytical signal, and correlations with the logarithm of the concentrations are observed from 1.0 × 10-3 to 1.0 × 10-10 mol L-1.

Pesticides (herbicides, fungicides, insecticides) are natural or manufactured chemical compounds used in modern agriculture to exterminate or control pests; these chemicals can damage crops and livestock and reduce farm productivity. Among the various pesticides, organophosphorus insecticides (OPs) are most often applied because they exhibit low environmental persistence and display high acute toxicity to their targets.11 Kazemi, M.; Tahmasbi, A. M.; Valizadeh, R.; Naserian, A. A.; Soni, A.; Agric. Sci. Res. J. 2012, 2, 512.,22 Dutta, R. R.; Puzari, P.; Biosens. Bioelectron. 2014, 52, 166. Organophosphates comprise a group of chemical compounds that are used extensively in agriculture as insecticides. However, overuse of OPs results in pesticide residues in food, water and the environment, which poses a significant threat to human health. These compounds express acute lethality not only to insects but also to mammals because they are potent inhibitors of acetylcholinesterase (AChe), which is an enzyme that is vital to nerve function. AChe inhibition results in the buildup of the neurotransmitter acetylcholine, which interferes with muscular responses and, in vital organs, produces serious symptoms and eventually death. Currently, there is a universal consensus that continuous monitoring of chemical contaminants in food, water and air is required and is important to the human health.33 Raghu, P.; Reddy, T. M.; Reddaiah, K.; Swamy, B. E. K.; Sreedhar, M.; Food Chem. 2014, 142, 188.

Organophosphorus pesticides can be identified and quantified by classical analytical techniques, such as gas chromatography (GC), high performance liquid chromatography (HPLC) or HPLC coupled with mass spectrometry (MS). However, these methods require time-consuming sample preparation with application of different extraction and cleanup procedures using toxic and expensive organic solvents.66 Cesarino, I.; Moraes, F. C.; Lanza, M. R. V.; Machado, S. A. S.; Food Chem. 2012,135, 873. In laboratories where a large number of samples must be processed rapidly, a method with sufficient sensitivity that can be used for preliminary screening is a good alternative.

Over the past decade, AChe inhibition-based biosensors have emerged as simple, rapid and sensitive tools for pesticide analysis in environmental monitoring, food safety and clinical analysis.77 Mostafa, G. A. E.; Open Electrochem. J. 2010, 2, 22.

To further reduce costs, the current study focuses on the development of a simple, rapid, reliable, sensitive and low cost method for the detection of low concentrations of acetylcholinesterase inhibitors that may be present in agricultural products and natural waters.

The method is based on the determination of the acetate formed by the enzymatic reaction of AChe immobilized on glass beads with the substrate acetylcholine at a fixed concentration. The enzymatic process is depicted in Scheme 1. The acetic acid that is formed after the reaction of the acetate with sulfuric acid permeates through a polytetrafluoroethylene (PTFE) membrane and is received by an aqueous solution of bromocresol purple (BCP; 5.0 × 10-5mol L-1) causing a color change from purple (λmax = 590 nm) to yellow (λmax = 400 nm). The variation in the absorbance of the solution is detected spectrophotometrically at 590 nm. 1,1'trimethylene-bis(4-formylpyridinium bromide) dioxime (TMB-4) was used to regenerate the enzyme.2222 Rodrigues, T. C.; Tubino, M.; Godinho, O. E. S.; Oliveira Neto, G.; Anal. Sci. 2001, 17, 629.

BCP solutions (5.0 × 10-5mol L-1) were prepared by dissolving 0.27 g of BCP in 10 mL of ethanol. Further dilutions with water where performed to obtain the desired concentration. The pH was adjusted to 7.0 by dropwise addition of a dilute 0.1 mol L-1 NaOH solution. To avoid absorption of CO2 from the air, the BCP solution was maintained in a bottle protected by a tube containing soda lime with an indicator.

The water used to prepare the solutions was first distilled in a glass distillatory, deionized in a Milli-Q Plus system and degassed prior to use.

Acetylcholine (5 × 10-3mol L-1) in an aqueous buffered solution was prepared by dissolving 0.0454 g in a 50.0‑mL volumetric flask and filling to the mark with Sörensen pH 7.0 buffer (0.1 mol L-1). This solution was always freshly prepared prior to use.

A 5 × 10-5mol L-1 solution of TMB-4 in an aqueous buffer was prepared by dissolving 0.0223 g in a 10.0-mL volumetric flask and filling to the mark with Sörensen pH 7.0 buffer. This solution was always freshly prepared prior use.

The scheme of the flow injection system is shown in Figure 1. Tygon® tubing is used at the pump to push or pull solutions, and the remaining tubes of the circuit are composed of polyethylene. The solution of acetylcholine chloride (Ac) is introduced by valve (V) into the carrier stream (F1) consisting of 5.0 × 10-3mol L-1 Sörensen buffer (pH 7.0), which is pumped by the peristaltic pump (P) at a rate of 1.0 mL min-1 (rates: F1 = F2 = F3). Then, the solution passes through the enzymatic reactor (ER) in a polyethylene tube (3.5 cm long and 3.0 mm in internal diameter) containing the immobilized enzyme. In sequence, the solution is mixed after the ER with a 0.5 mol L-1 sulfuric acid solution (F2). The acetate formed in ER is mixed with the sulfuric acid solution in order to form acetic acid, which is the form that passes through the PTFE membrane in the permeation cell (PC) and is carried out by the BCP solution (F3) to the spectrophotometer (SP). The formed acetic acid causes a color change from purple (λmax = 590 nm) to yellow (λmax = 400 nm). The signal, which is monitored at 590 nm, is registered on the chart recorder (R). The organophosphorus pesticide solutions (OPs) and the TMB‑4 solution in a phosphate buffer are also introduced by the same valve (V) into flow F1. The sample loop consisting of 100 μL was composed of a polyethylene tube (1.0 mm i.d.). All of the waste was collected in (W). A Lauda Model RCS RC6 thermostated bath was used to study the influence of the temperature on the enzymatic column. 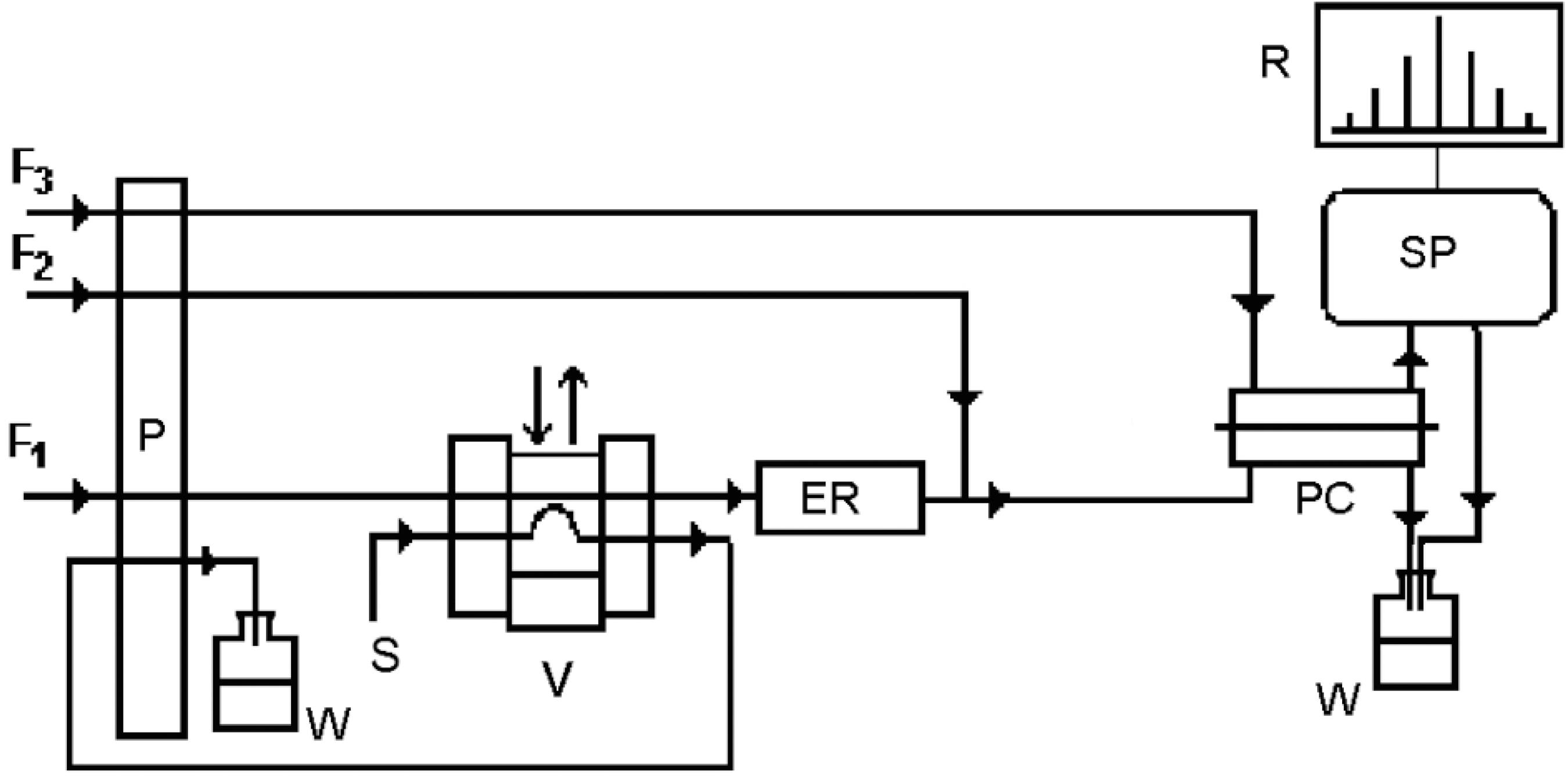 The analytical signal (Figure 2) is calculated from the difference between the height of the signal corresponding to the acetic acid formed from the acetylcholine before the inhibition (peaks 1) of the enzyme and the signal from the formed acetic acid after the inhibition (peaks 3) of the enzyme by the organophosphorus pesticide for the same acetylcholine concentration. The difference between the peak heights corresponding to the uninhibited acetylcholinesterase and those related to the inhibited one is the analytical signal E1. Peaks 2 and 4 represent the introduction of the pesticide and the regenerator TMB-4, respectively. Their negative values are due to the presence of CO2 in the BMP indicator that permeated through the membrane in the direction of the introduced solution, which causes an increase in the pH and an increase in the intensity of the purple color.

A study of the influences of parameters, such as temperature, acetylcholine chloride concentration, flow rate, sample volume, pH of the reaction medium (phosphate buffer) and sulfuric acid concentration, on the flow injection analysis (FIA) system was performed to optimize the analytical signal. By selecting the best compromise between the signal intensity and the operational characteristics (i.e., cleaning time, temperature control of the reaction, analytical frequency, volume of the solutions, and concentration of the reagents) of the flow system, the conditions reported in Table 2 were established for the method.

The determination of the pesticide concentrations was made with and without oxidation using bromine water. The oxidation of the samples was performed by simply adding 1 mL of 20 mmol L-1 bromine water in a 5-mL volumetric flask and filling to the mark with the pesticide solution, without any other pretreatment. The introduction into the analytical flow system was performed after 15 min.

The use of TMB-4 to reactivate the enzyme always exhibited excellent results, which allowed for normal operation of the analytical procedure.

The experiments were performed with 20 mmol L-1 hypochlorite and iodine (I3-) solutions as substitutes for bromine water. However, in contrast to bromine, these reagents irreversibly and cumulatively damage the enzyme during pesticides injection into the flow system, and therefore, the complete recovery of the enzymatic activity does not occur with the TMB-4 regenerator.

The possible direct effect of the bromine water on the enzyme was studied, and no influence of this reagent on the enzyme activity was observed.

Table 3 shows the relationship between the percentage inhibition of the enzyme and the pesticide concentration. The limits of detection were drastically lowered when some drops of bromine water were directly added to the pesticide solution. The resulting compounds are much more vigorous inhibitors of acetylcholinesterase, and therefore, the analytical signal significantly increased. Morita and Kumaran2929 Morita, M.; Kumaran, S.; Talanta 1995, 42, 649. reported that organophosphorus pesticide oxidation with bromine water changes the P=S group to the corresponding P=O group, and these compounds typically exhibit increased enzyme inhibition. However, this explanation does not clarify the results for dichlorvos, which contains a P=O group in the original molecule.

One possible suggestion for dichlorvos is that bromine addition occurs at the carbon-carbon double bond. Certainly, a more detailed study must be performed to explain the increase in the toxicity of these types of pesticides after oxidation with bromine water, but this work is beyond the scope of the current work.

Table 3 shows the relative percent inhibition of the aqueous solutions for the four pesticides on the acetylcholinesterase. The solutions in fresh orange juice were also studied. The inhibition was studied in the presence and absence of bromine water in all of the cases. The percent inhibition was c alculated for a pesticide concentration according to %(inhibition) = ((E1/E2) × 100), where E1 is the difference between the two signals before and after inhibition and E0 is the signal before inhibition.

The higher toxicity of the pesticides oxidized by the addition of bromine is evident, which is reflected in the increase in the inhibition of the enzyme. In the more dramatic case of dichlorvos, concentrations with a magnitude of 10-10mol L-1 can be detected.

To test the method in a real matrix, orange juice was separately spiked with known quantities of methyl parathion, chlorpyrifos, malathion and dichlorvos. The results are shown in Table 3.

This method provides a good indication of the level of toxicity of a sample containing an organophosphorus pesticide even without specifically knowing which compound is present, allowing for rapid medical decisions due to intoxication. In this type of analysis, a standard sample of 1.0 × 10-3mol L-1 dichlorvos must be analyzed for comparison.

Based on the observed results, the proposed method is reliable, low cost, rapid and easily performed. This method also exhibits very good detection because very low concentrations of organophosphorus pesticides, for which acetylcholinesterase is a specific sensor, were detected. Therefore, the method can be applied for the detection of these types of substances.