Pd nanoparticle catalyst loading 4.7 wt.% was prepared by the deposition-precipitation method and characterized by X-ray diffraction and transmission electron microscopy (TEM). The crystallite size estimated from the integral width of the highest intensity line using the Scherrer equation was 2.3 nm. Images obtained from TEM showed an equal distribution of the particles size between 0-2 and 2-4 nm, and also a good dispersion of the nanoparticles on the catalyst support. The catalytic activity of this nanocatalyst was studied for racemization reactions of (S)-(-)-1-phenylethylamine. After that, the catalyst was used in the chemoenzymatic dynamic kinetic resolution (DKR) of some primary amines. Expressive yields and optical purities were obtained.

The racemization step in DKR of amines is difficult because it requires harsh conditions. This is the reason for the reduced number of reports concerning selective DKR of amines. Most of the catalysts used for racemization of chiral amines are ruthenium complexes, more specifically Shvo's catalyst.2626 Paetzold, J.; Bäckvall, J. E.; J. Am. Chem. Soc. 2005, 127, 17620.,2929 Conley, B. L.; Pennington-Boggio, M. K.; Boz, E.; Williams, T. J.; Chem. Rev. 2010, 110, 2294. More recently, heterogeneous palladium nanoparticles supported on alkaline earth metals such as BaSO4, CaCO3 and BaCO3, displayed selectivity in racemization of chiral amines, inhibiting the formation of the side products. The higher selectivity was assigned to the nature of the support.3030 Parvalescu, A. N.; der Eycken, E. V.; Jacobs, P. A.; De Vos, D. E.; J. Catal. 2008, 255, 206.

Herein, we describe the preparation and characterization of Pd supported on MgCO3 containing 4.7 wt.% in metallic form. Next, the catalytic activities of all catalysts were evaluated in the racemization reaction of (S)-(-)-1-phenylthylamine. The use of the catalyst Pd/MgCO3 with 4.7% Pd led to a more satisfactory racemization than with the others. Therefore, it was selected for the dynamic kinetic resolution of some primary amines because of its reactivity.

To a solution of (S)-(-)-1-phenylethylamine (0.061 g, 0.50 mmol) in toluene, dimethyl sulfoxide (DMSO) or acetonitrile (5.0 mL), it was added Pd/MgCO3 loading 4.7% Pd (0.061 g) and Na2CO3 (0.053 g). The reaction was sealed with a rubber septum and parafilm, followed by hydrogen introduction at 1 atm pressure. The mixture was stirred and warmed (80 or 60 °C) for 24 h. After that, the solution was filtered and the residue was washed with ethyl acetate. The organic phase was washed with distilled water, with brine and dried over anhydrous MgSO4. The solvent was removed under reduced pressure. The crude was purified by flash column chromatography using an isocratic elution of MeOH:CH2Cl2 (1:1).

The catalyst Pd/MgCO3 containing 4.7 wt.% of palladium in metal form was prepared following the deposition-precipitation method. Pd(OAc)2 and basic MgCO3 were used as catalyst precursor and were converted to Pd0 and MgC2O4, respectively. The reduction process was performed by the addition of an alkaline solution of formaldehyde in a ratio of 10:1 (formaldehyde:Pd), as described in the literature.2424 Parvalescu, A. N.; Jacobs, P. A.; De Vos, D. E.; Appl. Catal., A 2009, 368, 9. Initially, basic MgCO3 was dispersed as a support in a mixture of Pd(OAc)2 in H2O, which was heated at 80 °C for 1 h. In the beginning, the mixture was brown and became black when the reduction was completed. The X-ray diffraction pattern of the catalyst is shown in Figure 1.

The X-ray diffraction patterns reflected peaks related to the presence of Pd0. The diffraction lines at 2q = 40.1 and 46.7° are characteristic of the Pd in metallic phase. Together with the lines of Pd0, the XRD exhibited other diffraction lines at 2θ = 17.1, 22.4, 37.2, 47.9 and 49.9°, which correspond to magnesium oxalate phase. Crystallite size was estimated from the integral width of the highest intensity line of Pd0 (40.1°) using the Scherrer equation. The value calculated was 2.3 nm. Magnesium oxalate was formed during the reduction process, by the reaction of magnesium carbonate with formaldehyde in a basic medium.

Representative image of the palladium catalyst with 4.7% Pd0 content was obtained by TEM, as well as the corresponding particle size distribution in the catalyst (Figure 2).

Figure 2
(Left) Image of 4.7% Pd on MgCO3 and (right) its size distribution of nanoparticles (NPs) obtained by TEM analysis.

By the TEM analysis, the presence of palladium nanoparticles, which generally present sizes ranging from 2 to 10 nm,2424 Parvalescu, A. N.; Jacobs, P. A.; De Vos, D. E.; Appl. Catal., A 2009, 368, 9. was characterized by the most shaded spots dispersed on the used support. A distribution in equal proportions of diameters between 0-2 and 2-4 nm has been noted. In addition, a good dispersion of the nanoparticles was observed on the support of the catalyst, discarding the possibility of agglomeration that could harm the catalytic activity.

The catalytic activity of this catalyst was evaluated by the reaction of racemization of the (S)-(-)-1-phenylethylamine. A preliminary reaction condition chosen for initial studies was using toluene as solvent, at 80 °C, under hydrogen atmosphere for 24 h. Without the use of hydrogen, the racemization reaction was not observed, indicating that the hydrogen pressure is crucial. The reaction furnished the desired product in 1% ee only and 76% yield. The ideal racemization reaction should provide the conversion of 50% of the (S)-substrate to the corresponding (R)-enantiomer, affording the racemate (0% ee).

The next step was to find proper reactional conditions for the catalytic racemization of (S)-(-)-1-phenylethylamine (Table 1). The racemization was affected by the solvent, temperature and additive. The best rate was obtained in toluene, at 80 °C and without the use of Na2CO3 (Table 1, entry 1). The presence of Na2CO3 affected the reaction leading to lower yields. For the reactions performed in DMSO, the racemization was not observed (entries 5-7). On the other hand, when performing the reaction in acetonitrile, the enantiomeric excesses were great, but the racemized amine was isolated in moderate yields only (entries 8-10), that could be explained by the formation of side products, which was observed more significantly in acetonitrile. Thin layer chromatography (TLC) analysis of all reactions presented only one compound. However, the GC analysis revealed the presence of secondary products which could not be characterized due to the difficulty of viewing and isolation.

The mechanism for racemization step, depicted in Scheme 1, was adapted from the literature.2424 Parvalescu, A. N.; Jacobs, P. A.; De Vos, D. E.; Appl. Catal., A 2009, 368, 9.,3030 Parvalescu, A. N.; der Eycken, E. V.; Jacobs, P. A.; De Vos, D. E.; J. Catal. 2008, 255, 206. The reaction shown is a metal-catalyzed process of dehydrogenation-hydrogenation and it produces the prochiral imine 3 as intermediate. After the hydrogenation of 3, both enantiomers (1 and 4) are formed because of the syn addition of hydrogen on the two faces of 3. The formation of side products can be explained by the reaction of amine 2 with imine 3, which is acid-catalyzed and provides the secondary amine 6 after the hydrogenation of the intermediate 5. The hydrogenolysis of 6 is metal-catalyzed and produces an equimolar mixture of 2 and ethylbenzene. 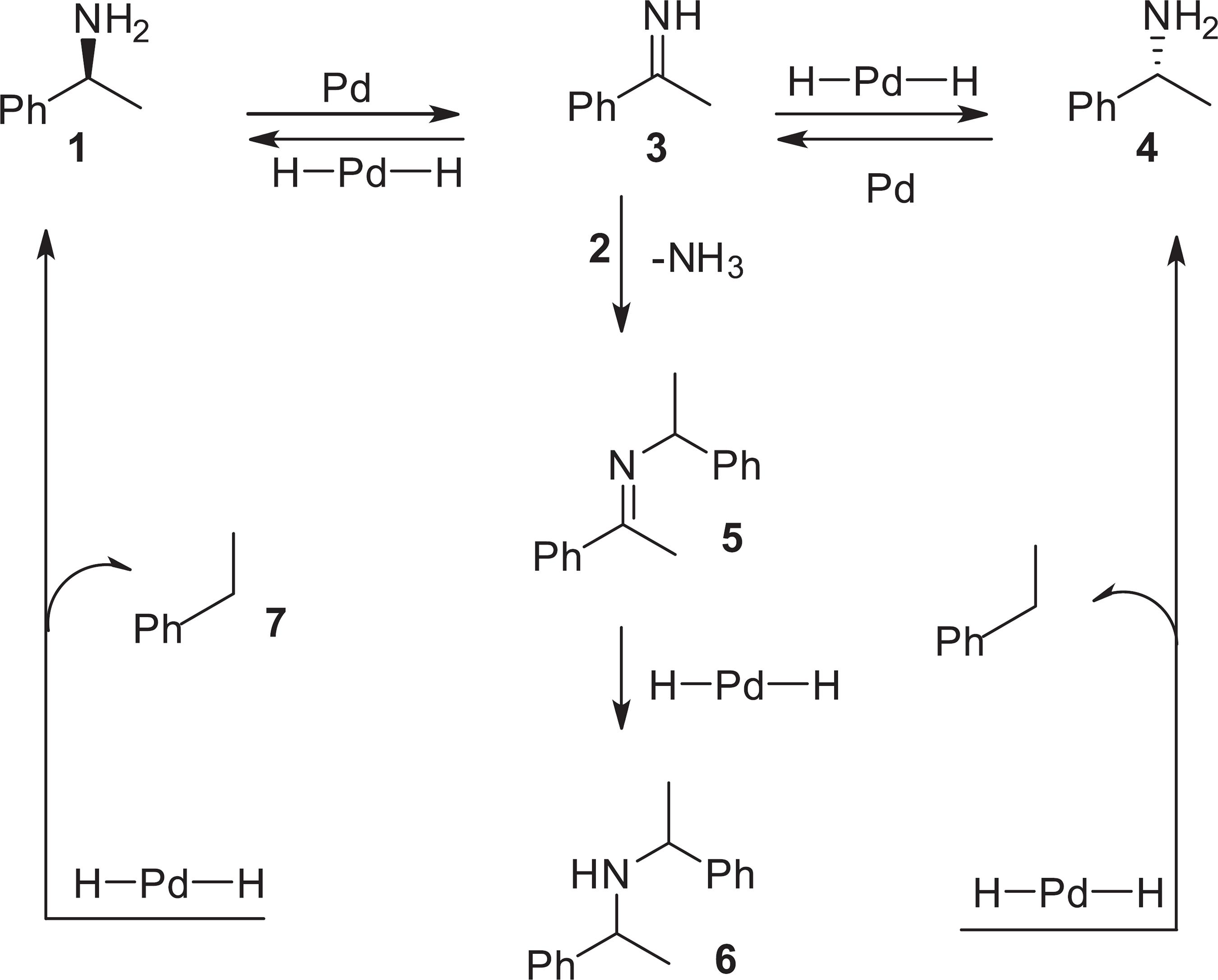 The chemoenzymatic DKR of (±)-1-phenylethylamine (2), which was used as a model compound, catalyzed by CaLB and 4.7 wt.% Pd/MgCO3 afforded the asymmetric N-acetylated product in 63% yield and 90% ee, when the reaction was performed in a similar condition to that optimized for the racemization reactions, with addition of isopropyl acetate as acyl donor (Table 2, entry 1). After that, we decided to investigate the temperature and the acyl donor influences for the DKR. Performing the reaction at milder temperature of 60 °C and using isopropyl acetate as acyl donor, the compound 2 was converted to the corresponding acetamide (11) in excellent yield (98%) with high optical purity (> 99%) (Table 2, entry 2). Isopropyl acetate was the best among three acylating agents tested for DKR of 2. While the use of Na2CO3 in the racemization reaction has not contributed positively, for the DKR this reagent had an important role. The use of Na2CO3 at milder temperature may have been responsible for the suppression of the side products formation.

Next, the reaction scope of the DKR protocol was extended to a compound bearing electron withdrawing group (8) and electron donor group (9) at the aromatic position. In both studied cases, the substituents contributed for less reactivity, compared to that obtained for amine 2. A longer reaction time of 36 h was necessary to complete the conversion of the fluorinated substrate 8 to the corresponding chiral acetamide (entries 6 and 7). For the methyl substituted compound 9, a higher temperature of 100 °C and isoamyl acetate as acylating agent were required to improve the reaction yield to 66% (entry 12). The reactions of the cyclic benzylic amine 10 required less hindered acyl donor ethyl acetate, a milder temperature of 80 °C and a longer reaction time of 36 h to furnish the corresponding asymmetric acetamide 14, which was isolated in excellent yield with high optical purity (entry 14).

This paper describes the preparation and characterization of Pd supported on MgCO3 containing 4.7 wt.% in metallic form. The catalyst was characterized by X-ray diffraction and transmission electron microscopy. After analyzing the diffractogram, it was possible to identify the phases corresponding to metallic palladium and estimate its particles size. The catalyst support phases were attributed to magnesium oxalate, which does not take precedence as a component of heterogeneous palladium catalyst. Transmission electron microscopy image showed an equal distribution of the particles size between 0-2 and 2-4 nm, and also a good dispersion of the nanoparticles on the support. The catalytic activity was evaluated by the racemization reactions of (S)-(-)-1-phenylethylamine and also by the DKR of racemic primary amines. In optimized conditions, expressive yields and optical purities were obtained.

The authors are grateful for the financial support from FAPESP.

Supplementary information is available free of charge at http://jbcs.sbq.org.br as PDF file.

Thumbnail
Figure 2
(Left) Image of 4.7% Pd on MgCO3 and (right) its size distribution of nanoparticles (NPs) obtained by TEM analysis.

Figure 2   (Left) Image of 4.7% Pd on MgCO3 and (right) its size distribution of nanoparticles (NPs) obtained by TEM analysis.