Incidence and severity of scorpion stings in Algeria

Scorpion stings are a public health problem in the Maghreb region. In Algeria, epidemiological data were collected over the past twenty years by the Algerian health authorities. This study is an analysis of morbidity and mortality data collected from 2001 to 2010. Annual incidence and mortality due to scorpion envenoming were 152 ± 3.6 stings and 0.236 ± 0.041 deaths per 100,000 people (95% CI), respectively. The risk of being stung by a scorpion was dramatically higher in southern areas and central highlands due to environmental conditions. Incidence of envenoming was especially higher in the adult population, and among young males. In contrast, mortality was significantly higher among children under 15 years, particularly ages 1-4. Upper limbs were more often affected than lower limbs. Most stings occurred at night, indoors and during the summer. Data collected since 2001 showed a reduction of mortality by nearly 50%, suggesting that the medical care defined by the national anti-scorpion project is bearing fruit.

Incidence and severity of scorpion stings in Algeria

XICenter for the Study and Research of Malaria Associated with Pregnancy and Childhood (Cerpage), Cotonou, Benin

Scorpion stings are a public health problem in the Maghreb region. In Algeria, epidemiological data were collected over the past twenty years by the Algerian health authorities. This study is an analysis of morbidity and mortality data collected from 2001 to 2010. Annual incidence and mortality due to scorpion envenoming were 152 ± 3.6 stings and 0.236 ± 0.041 deaths per 100,000 people (95% CI), respectively. The risk of being stung by a scorpion was dramatically higher in southern areas and central highlands due to environmental conditions. Incidence of envenoming was especially higher in the adult population, and among young males. In contrast, mortality was significantly higher among children under 15 years, particularly ages 1-4. Upper limbs were more often affected than lower limbs. Most stings occurred at night, indoors and during the summer. Data collected since 2001 showed a reduction of mortality by nearly 50%, suggesting that the medical care defined by the national anti-scorpion project is bearing fruit.

Scorpion stings are a public health issue in many tropical and subtropical regions of the world. They have been identified for many years in Algeria and in other countries of the Maghreb (1-5). In Algeria, the most dangerous scorpion species that are of medical interest include Androctonus australis and Leiurus quinquestriatus, and are found mostly in the southern highlands and in the Atlas and Hoggar mountain ranges. Other species also causing fatalities or threats to life are Androctonus aeneas, Buthus occitanus and Buthacus arenicola, found respectively in the southern highlands, in the northern Sahara, Hoggar and in the Tassili (5-7).

It is now recognized that a more detailed analysis of epidemiological data, including incidence, mortality, at-risk population and the circumstances of the stings, would lead to better management of envenomations in vulnerable populations. However, the data available to date do not fully meet the expected objectives of health personnel.

The health information system regarding scorpion stings in Algeria has been operational since 1986. It was revised in 1997 following a ministerial decree establishing a national interdisciplinary committee for control of scorpion envenomation. The national program for controlling scorpion envenoming has been operational since 1997 throughout the country. This device resulted in improved availability of epidemiological data. The present study aims to provide an overview of the epidemiological situation of scorpion envenomations in Algeria, an analysis that might lead to recommendations for improving the national program (2, 4).

Algeria is characterized by a mixed landscape, according to the topography and climate, presenting the following three major geographical regions defined by two mountain ranges parallel to the coast, from north to south: Tell, Highlands and South Algeria or Sahara.

Epidemiological data were collected in each health facility on standardized forms transmitted to the Ministry of Health and the National Institute of Public Health where they were subsequently registered on a computer database and analyzed. A portion of this information has been available since 1991.

The notification system available in health facilities was established in 1986 and has been gradually improved since 1997. The current system consists of four standardized forms filled out by the nursing staff:

 a death statement detailing demographics, circumstances of the accident, sting site, location of initial management, clinical evolution of envenomation between the arrival at the health facility and death, and the place of death;

 a monthly synthetic file summarizing all cases of scorpion stings and subsequent deaths in health facilities in every wilaya (regional administrative unit).

National incidence and mortality were calculated for the 1991-2010 period, based on the population census of 2008 (available from http://www.ons.dz/collections/pop1_national.pdf, accessed November 20, 2011), corrected by applying an annual population growth rate of 1.2% over the period. Incidence and mortality estimates were based on scorpion stings and consequent fatalities in each of the three geographical regions and 48 wilayas of Algeria between January 2001 and December 2010, in relation to the average population in 2004 (8).

A trend line giving the best correlation coefficient (R2) was calculated based on the observed data. The confidence interval and significance level were 95% and 0.05, respectively. Trend curves and correlation tests were calculated using Microsoft Excel® 2010. 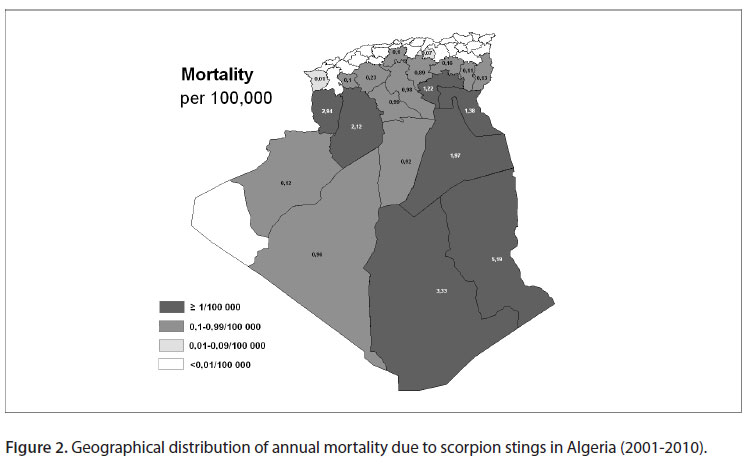 Epidemiological analyses of the 2001-2010 period showed that scorpion stings were more frequent in the male population (57% versus 43% in females). The incidence was greater in adult whereas mortality was significantly higher among children under 15 years, and more particularly between 1 and 4 years (Figures 3 and 4). Stings were located predominantly on the limbs (91%), mainly the upper limbs (Figure 5). 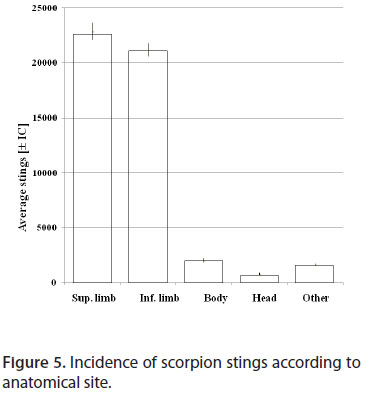 The seasonal distribution of stings showed a peak in summer (Figure 6). Stings were more frequent in the evening and the morning (Figure 7) and occurred indoors (56.6%). 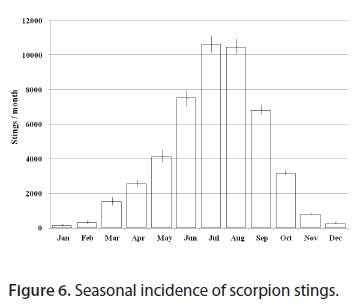 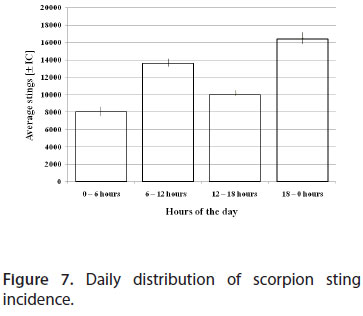 The health information system has partially incorporated the occurrences of scorpion stings and deaths from scorpion envenomation since 1986.

While reporting of scorpion envenomation cases was still neither binding nor systematic, nor centralized, an increase was registered in the number of recorded cases between 1991 and 1998 (Figure 8). However, significant reductions were achieved in the case fatality rate from 1991 to 2002 (Figure 9) and mortality after 2001 (Figure 10), according to the International Seminar on the scorpion envenomation in Ghardaïa in 1989 and launch of a pilot study regarding the control of scorpion stings (training, information, awareness, control of scorpion populations) in 1990 in the wilaya of Biskra (2). In addition, regular meetings organized by the committee that have provided recommendations since 1997 led to a decrease in the number of cases and stabilization of the data. 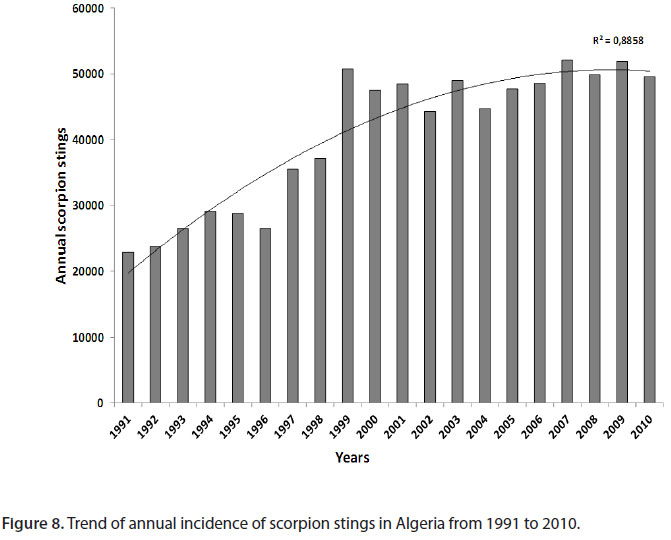 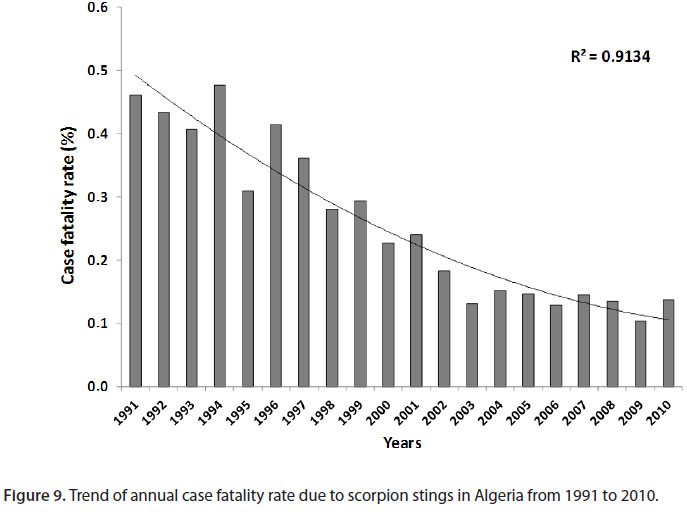 Accordingly, all indicators have stabilized over the last 10 years, suggesting that data collection became reliable and robust. The gradual improvement of data collection between 1991 and 2000 may suggest that the increased incidence is attributable to a mechanical effect. The reduction in mortality and lethality was probably achieved thanks to better management of patients in health facilities. However, it also should be emphasized that we analyzed only the data of the ten last years (2001-2010). A detailed annual report of the epidemiological situation and a report on the epidemiological characteristics of deaths due to scorpion envenomation from 2001 to 2010 are now accessible on the website of the National Institute of Public Health (3), and are likely to facilitate the follow-up of the control program and maintain the motivation of health personnel.

Nevertheless, it is likely that some stings could not be recorded. In Morocco 40% of stung patients turn to traditional medicine (9). Whereas in Algeria, the stability of indicators, especially after 2001, suggests that most of the envenomed patients made use of the health services. On the other hand, the possibility that some forms could not be filled out because of the workload of health personnel is negligible. This leads to the conclusion that the available data are reliable and representative.

Between 2001 and 2010, the annual average of scorpion sting incidence in Algeria was 152 ± 3.6 stings per 100,000 population. During the same period, the annual mortality was 0.236 ± 0.041 deaths per 100,000 inhabitants. However, the distribution of stings and deaths was very uneven. The southern and central highlands showed higher incidence and mortality than observed in the Tell region. In the former two, the abundance of scorpions resulting from the hot dry climate and conservation of the natural environment, may explain the high incidence, inversely proportional to the density of the human population (Figure 11). However, scorpion stings also occur in towns, even inside homes (5). The adaptation of some species to a human environment has already been reported (10).

Mortality, especially when expressed as a case fatality rate, results from several factors: toxicity of the species responsible for the sting, delayed treatment, quality of care, with the latter being dependent on equipment from health facilities (resuscitation equipment particularly), experience of health personnel and the supply of appropriate immunotherapy. The data did not contain details on the first two factors (species in question and consultation time). Although the other factors were not documented by the national health information system and thus had to be evaluated a posteriori, they constitute the precise basis of the strategy for controlling scorpion stings.

The stability of the mortality from 2002 suggests that the actions against scorpionism had reached their limit (Figures 9 and 10). It is therefore necessary to investigate the factors that are poorly documented (species involved and, most importantly, late treatment) in order to consider needed improvement. In addition, the use of immunotherapy should be better investigated. In Algeria, the treatment protocol developed in 1999 by consensus at a seminar workshop in Biskra includes systematic administration of monovalent scorpion antivenom associated with symptomatic treatment (analgesics, corticosteroids).

Admission to the intensive care unit is required if the patient shows predictive signs of severity (4, 11, 12). This strategy is the result of the remarkable tolerance of antivenoms composed of purified fragments of immunoglobulins F(ab')2 (12, 13). However, their use and clinical efficacy need to be better documented. The availability and use of antivenom (including route of administration) in peripheral health structures are poorly known. The efficiency and rapid use of the antivenom might promote a beneficial neutralization of the neurotoxins before their binding to their targets. Immunotherapy could be also associated with the symptomatic treatment according to the symptoms observed by the physicians, in order to shorten significantly the duration of envenomation (14-16).

The sting circumstances and the at-risk populations of the present study are in agreement with those described in the literature (5), thus confirming that emergency care is a priority in childhood cases for reducing mortality, which remains high in this population group.

The present study showed that scorpion stings are a public health issue in Algeria as in all countries of the Maghreb region and the Middle East. There was a clear gradient in the incidence of scorpion stings -and mortality- from north to south linked both to the climate and population density. The incidence and mortality were highest in the southern part of the country, which is due to both environmental conditions and more difficult access to care in these regions, especially on account of scattered health facilities. The health information system that has been implemented in Algeria seems to be efficient and can properly analyze epidemiological data on scorpion stings. However, this information system must be improved in order to include some missed parameters, especially the species involved and conditions of case management (17). The results showed that the program against scorpionism has helped reduce the annual mortality by half (0.395 versus 0.207 per 100,000 population) between 1991 and 2010. Additional information must still be collected, including data on the performance of antivenoms and how they are used by health personnel. Furthermore, the stagnation of the incidence for several years requires a review of the prevention strategy.

CONFLICTS OF INTEREST: The authors declare no conflicts of interest. 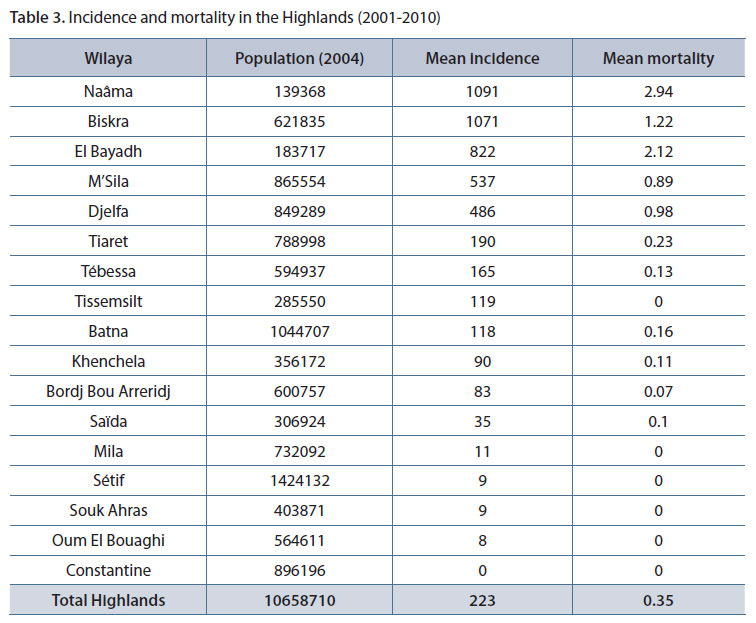