In recent years, the search for natural plant products to fight viral diseases has been increasing. In this work, two Spondias species, namely S. mombin and S. tuberosa, found in Ceará state (Brazil), and their main phenolic components were evaluated against dengue virus. In vitro antiviral tests were performed against type-2 dengue virus by the MTT method and standard cytopathic effect reduction assay in C6/36 cells. Cytotoxicity was also evaluated by MTT. The presence of phenolic compounds quercetin, rutin, and ellagic acid in plant extracts was characterized by HPLC analysis. Both Spondias species extracts and components were nontoxic to the cells whereas rutin and quercetin displayed relevant antiviral activity with IC50 of 362.68 µg/mL and 500 µg/mL, respectively.

In recent years, the search for natural plant products to fight viral diseases has been increasing. In this work, two Spondias species, namely S. mombin and S. tuberosa, found in Ceará state (Brazil), and their main phenolic components were evaluated against dengue virus. In vitro antiviral tests were performed against type-2 dengue virus by the MTT method and standard cytopathic effect reduction assay in C6/36 cells. Cytotoxicity was also evaluated by MTT. The presence of phenolic compounds quercetin, rutin, and ellagic acid in plant extracts was characterized by HPLC analysis. Both Spondias species extracts and components were nontoxic to the cells whereas rutin and quercetin displayed relevant antiviral activity with IC50 of 362.68 µg/mL and 500 µg/mL, respectively.

Dengue infection is caused by four serotypes of the dengue virus (DENV 1, 2, 3 and 4), a member of the Flaviviridae family; it is generally transmitted in a cycle involving humans and mosquito vectors. The global prevalence of dengue virus has grown dramatically in recent decades. Until now, there is no specific drug to combat infection and currently the most effective prevention measures lie in controlling the mosquito (1).

Efforts have been made to evaluate the antiviral activity of a wide range of natural products, including plants, in an attempt to isolate and characterize new compounds which can inhibit virus replication or treat viral infection (2). For this reason, plant extracts and components are becoming more important as potential sources for antiviral agents. Plant extract screening has led to the detection of some effective in vitro viral replication inhibitors (3, 4).

Hydroalcoholic extract of S. mombin inhibits replication of the herpes simplex and coxsakie B viruses, responsible for painful mouth ulcers. The active compounds against these viruses were identified as geraniin and galoilgeraniin at concentrations of 50 mg/L and two caffeoyl esters at concentrations of 100 mg/L (5, 6). No antiviral activity was reported for S. tuberosa.

In order to find new antiviral agents to combat dengue, Spondias mombin and S. tuberosa extracts and their main components were evaluated in vitro against DENV-2 in C6/36 cells.

Plant material was collected from their natural habitats in the state of Ceará (Northeast of Brazil). Voucher specimens (S. mombin-34.826 and S. tuberosa-34.887) were deposited in the Herbarium at the Department of Biology, Federal University of Ceará (UFC), Brazil. Quercetin, rutin, and ellagic acid were purchased from Sigma-Aldrich Co. (USA).

Leaves of S. mombin (3.59 kg) and S. tuberosa (3.23 kg) were soaked in methanol:water (80:20) at room temperature (25-28°C) for seven days. The solution was filtered through filter paper and evaporated in a rotary evaporator. The extracts were dried over a water bath with the temperature held below 60°C.

Follow-up extractions and HPLC analysis were accomplished using the same procedure as for rutinw. Recovery was determined as follows: recovery (%) = (A _ B)/C x 100%, where "A" is the amount of detections, "B" is the amount of sample without added standard, and "C" is the amount of added standard. The relative standard deviations (RSD) of recoveries for the ellagic acid were 2.1 (n = 5; mean = 98). Identification of rutin, ellagic acid, and quercetin (Figure 1) in Spondias extracts was performed by HPLC-PDA, observing retention time (Rt) and UV-VIS spectra. The standards were prepared in methanol at 0.1 mg/mL. 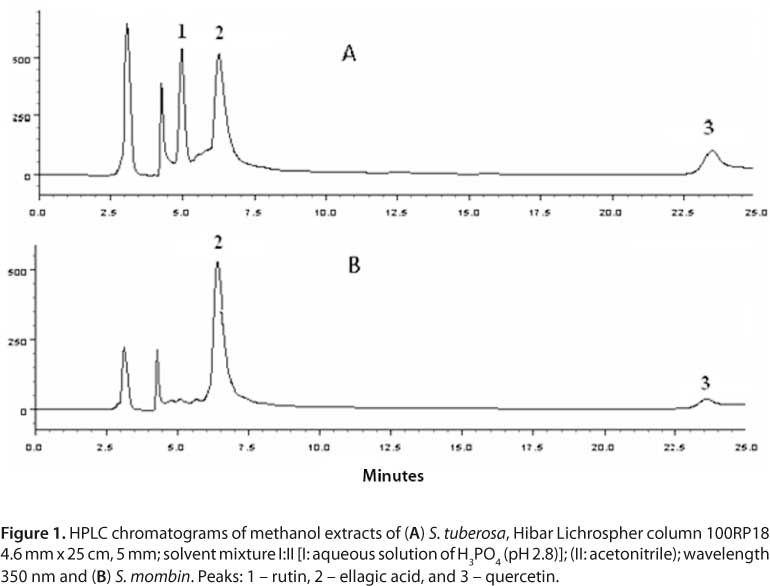 Chemical tests were performed following the protocols described by Matos (7), based on reactions with specific reagents for the main classes of natural products with precipitate formation or color change.

C6/36 cells (2 × 105 cells/well) were infected with DENV-2 (3.5 x 105 PFU) and infectivity was confirmed by RT-PCR. The purpose of this assay was to standardize days of C6/36 cell infection by DENV-2. Briefly, infected cells were removed each day of infection (1st to 8th days of infection) washed with phosphate buffered saline (PBS) and RNA was purified with Trizol® (Invitrogen, USA). The one-step kit (Qiagen, Germany) was used for cDNA synthesis and PCR following manufacturer's instructions. Primer oligonucleotide sequences were as follows: forward 5'-ACCATCGTGATAACA-3' reverse 3'-AGGCTGTGTCACCTA-5'. Amplification conditions were 50°C for 30 minutes and 95°C for 15 minutes, followed by 40 cycles of 94°C for one minute, 55°C for one minute, and 72°C for one minute, and a final extension at 70°C for ten minutes. The amplified product was then analyzed on 2% agarose gel.

Cell viability was evaluated by the MTT method (Sigma-Aldrich, USA) using 3-(4,5-dimethylthiazol-2-yl)-2,5-diphenyl tetrazolium bromide (8, 9). Briefly, C6/36 cultures were prepared in 96-well plates (TPP, Switzerland), at 2 × 105 cells/well. After 24-hour incubation at 28°C, the culture medium was removed and cells exposed to different concentrations of the extracts, four wells per concentration prepared in 200-µL culture medium per well. Untreated controls had 200 µL of medium culture added. Cells were then incubated for seven days. The medium was removed and 50 µL of MTT solution (5 mg/mL) was added. The plates were reincubated for four hours and the MTT solution removed, 100 µL of DMSO was added to dissolve formazan crystals and the plates were gently shaken, whereby crystals were completely dissolved. The absorbance was read on ELISA equipment (Amersham Biosciences, USA) at 495 nm. The 50% cytotoxic concentration (CC50) was defined as the sample concentration that reduced cell viability 50% compared to untreated controls.

Antiviral activity was also evaluated by the MTT method. In brief, to determine inhibitory potential of the sample for DENV-2 replication, 100 µL of virus suspension (3.5 x 105 PFU) was added to a cell shaker for one hour at 28°C. Thereafter, the viral suspension was removed and various concentrations of samples were added and incubated for seven days. This was followed by the same procedure as described in the previous paragraph. The 50% inhibitory concentration (IC50) was defined as the concentration that inhibited 50% of viral replication compared to virus controls. The selectivity index (SI), an important parameter for evaluating antiviral activity, was calculated from the CC50/IC50 ratio. Antiviral activity was determined a according to the following formula (10):

Leaves from the two Spondias species were soaked in methanol:water (80:20) for seven days at room temperature. The solutions obtained were then evaporated leaving the crude extracts. Extract yields of S. tuberosa and S. mombin were respectively 1.5 and 5.0%. Qualitative phytochemical analysis of S. mombin and S. tuberosa revealed the presence of phenols, hydrolysable tannins, flavones, flavonoids, leucoanthocyanidins, and saponins. Results showed both species presenting the same classes of compounds; this agrees with Corthout et al. (5) who reported the presence of ellagitannins in S. mombin.

Three main compounds were detected in Spondias species; structural characterization was performed by 1H and 13C-NMR spectroscopic analysis and comparison with ellagic acid, quercetin, and rutin data (11, 12). The relative percentage yields of these phenolic compounds in dried leaves for Spondias species were evaluated by HPLC-PDA, considering retention time (Rt) and UV-VIS spectral analysis. Identification of components was established by overlapping their peaks (retention time) and absorption spectra with those of rutin, ellagic acid, and quercetin standards. Chromatograms of S. mombin and S. tuberosa are shown in Figure 1. Rt for rutin, ellagic acid, and quercetin were respectively 5.11, 6.24, and 23.46 minutes.

The cytotoxic effects of S. mombin and S. tuberosa extracts and related phenolic compounds were expressed by their CC50 values obtained by MTT method. No cytotoxicity was observed with any of these compounds at concentrations up to 1000 µg/mL, allowing us to estimate the CC50 for all compounds as greater than 1000 µg/mL. Extract cytotoxic levels were evaluated before carrying out the antiviral tests and they did not show toxicity towards C6/36 cells.

As per the RT-PCR results, virus replication could be detected on the fourth day. However, to optimize experiments, antiviral assays in this study were performed on the fifth day of infection (Figure 2). S. mombin and S. tuberosa extracts and components rutin, quercetin, and ellagic acid on DENV-2 in C6/36 cells inhibited virus replication respectively by 3.31, 17.98, 68.42, 50 and 25.02 (Figure 3) in a concentration of 500 µg/mL. Comparing IC50 values, rutin was more active against DENV-2 with an IC50 of 362.68 ± 0.04 µg/mL and SI of 2.75 than quercetin with an IC50 of 500.00 ± 0.01 µg/mL and SI of 2. Quercetin and rutin were also evaluated by standard cytopathic reduction assay inhibiting cell disruption (Figure 4).

There are few works studying natural products against the dengue virus; for example, Parida et al. (13) evaluated the antiviral action of neem (Azadirachta indica) extract and isolate azadirachtin against DENV-2 infected C6/36 cells. The extract showed an inhibitory effect against dengue virus at high concentrations (1.897 mg/mL), when evaluated by cytopathic effect inhibition. Azadirachtin did not show antiviral action. Talarico et al. (14) investigated the action of two sulfated polysaccharides from red algae against four dengue virus serotypes using different cell lines. The authors found differential susceptibility of vertebrate and invertebrate cells to the inhibitory action of compounds against DENV. With respect to host cell type, the polysaccharides were active inhibitors of DENV-2 and DENV-3 multiplication in Vero cells and in HepG2 and foreskin PH cells, but were inactive in mosquito C6/36 cells. There were no significant differences in DENV multiplication levels in these vertebrate and invertebrate cell lines, confirming that differential susceptibility of virus serotype or host cell is not due to virus growth ability. Sulfated galactomannans at 347 µg/mL reduced viral titer in immunofluorescence assays using DENV-1 in C6/36 cells (15).

Antiviral activity is one of the cited biological activities displayed by flavonoids. Quercetin inhibited HIV-1 integrase which mediates the insertion of viral DNA into host cellular DNA and is essential for viral replication and virion production (16). Quercetin and its glycoside (quercetin 7-rhamnoside) were tested against porcine epidemic diarrhea virus. Quercetin 7-rhamnoside was more active than quercetin with an IC50 of 0.014 mg/mL (17). Tao et al. (18) showed in vitro the anti-HIV and anti-HSV activities of sodium rutin sulfate, obtained synthetically by modifying natural flavonol glycoside rutin. Kang et al. (19) demonstrated the role of ellagic acid as a therapeutic agent against the hepatitis B virus.

In summary, the results of this study revealed the presence of quercetin, rutin, and ellagic acid in two Spondias species. This is the first study to report quercetin and rutin in these species. The evaluation of antiviral activity against DENV-2 in C6/36 cells suggests that rutin and quercetin have potential for the development of an anti-DENV agent. Further studies are required using other cell lines and in vivo assay to corroborate the effectiveness of these flavonoids against dengue virus.

There are no conflicts of interest.