Monckeberg's arteriosclerosis as a cause of lower limb critical ischemia: case report

Monckeberg's arteriosclerosis can be a rare cause of severe lower limb ischemia. We report the case of a patient with critical lower limb ischemia without revascularization conditions progressing to limb amputation. The patient did not present any traditional risk factors associated with atherosclerosis. Histopathological diagnosis showed arteriosclerosis associated with Monckeberg's medial calcification.

Monckeberg's arteriosclerosis as a cause of lower limb critical ischemia: case report

Monckeberg's arteriosclerosis can be a rare cause of severe lower limb ischemia. We report the case of a patient with critical lower limb ischemia without revascularization conditions progressing to limb amputation. The patient did not present any traditional risk factors associated with atherosclerosis. Histopathological diagnosis showed arteriosclerosis associated with Monckeberg's medial calcification.

The main cause of lower limb ischemia is the atherosclerotic disease, characterized by the formation of atheromatous plaques in the arteries. Atherosclerosis has the following main risk factors: family history, male gender, old age, smoking, diabetes mellitus, dyslipidemia and hypertension.1 When there is severe ischemia in patients who did not present any of the risk factors above, other less frequent etiologies and in different atherosclerotic processes should be considered.1,2 The authors aim at reporting a rare case of critical lower limb ischemia caused by Monckeberg's arteriosclerosis.

A 64yearold male patient reported having bronchial asthma with monthly use of injectable corticosteroid over the past 6 months. He denied smoking, diabetes mellitus, dyslipidemia, alcoholism or hypertension. He reported having noticed, about a year ago, the occurrence of small necrotic lesions at the end of the right toes, not associated with pain or another local symptom. The patient denied history of trauma. He reported only treatments with bandages 3 months ago, with no resolution of the lesions. About 1 month ago, he started reporting pain at rest in the limb.

On physical examination, he had cold and edematous right lower limb, with absence of popliteal and distal pulses, marked pallor at limb elevation, moderate reactive hyperemia and venous filling time of 45 seconds. There was presence of dry necrosis in both feet, besides wet gangrene of the second right toe. The left lower limb was painless, hyperemic, with normal femoral pulse and absence of popliteal and distal pulses.

Laboratory tests presented: leucocytosis (15,600/µL) with deviation to the left (2%), eosinophilia (12%) and platelet aggregates; 159 mg/dL triglycerides; 129 mg/dL LDL; 31 mg/dL HLD; 192 mg/dL total cholesterol; 93 mg/dL glucose; and 1.5 mg/dL creatinine. Rheumatoid factor was nonreagent, antinuclear factor was nonreagent, cryoglobulins were negative, anticardiolipin antibodies IgM and IgG were negative, anticytoplasm antibody was nonreagent, serology for syphilis was negative and serologies for hepatites B and C were negative. The following examinations showed slight changes: erythrocyte sedimentation rate (ESR) of 65 mm/h; Creactive protein of 99.7 mg/L; factor V Leiden of 62%; C3 complement of 206 mg/dL; C4 complement of 56 mg/dL; and fibrinogen of 503 mg/dL. Liver panels were altered, with prothrombin time of 50%, TGO of 115 UK/mL and TGP of 75 UK/mL. The other tests were: antithrombin III of 0.22 g/L; C protein of 52%; S protein of 79%; and homocysteine of 7.5 µmol/L.1 The patient was submitted to arteriography of the right lower limb, which showed multiple stenoses and irregularities in the superficial femoral artery (Figure 1), patent popliteal artery, diffuse disease, multiple stenoses of the tibial and fibular arteries (Figure 2) and distal bed with diffuse calcifications, with no filling with contrast (Figure 3). The patient was submitted to exploration of the supragenicular popliteal artery. Macroscopic examination showed stiffened arteries, with extensive plaques and intense parietal calcification process, and the arteries, on palpation, had bone texture. The arterial system did not present conditions for clamping, arteriotomy or revascularization. Due to the status of critical ischemia, we chose transfemoral amputation.

The patient had good postoperative evolution. Anatomopathological test of the amputated limb showed ischemic necrosis, atherosclerosis with fibrous plaques and calcification of the medial layer in the femoral, popliteal and tibial arteries. The final diagnosis was calcification of Monckeberg's medial layer.

The left lower limb was assessed using arterial Doppler ultrasound, which showed major parietal calcifications and occlusion of the anterior and posterior tibial, fibular and dorsalis pedis arteries. However, since the patient did not present pain at rest or significant lesions, the conservative treatment was chosen.

Calcification of Monckeberg's medial layer is more prevalent in people older than 50 years and in males. Apparently, it is not associated with other risk factors, although the incidence is higher in diabetic patients.1,3,4 The prevalence in the population, in a recent study, was 13.3% for males and 6.9% for females.5 This is a rare cause of arteriosclerosis, in which there are calcium deposits in the medial layer of arteries, and can eventually progress to a process of ossification.2,4,6 These calcium deposits can acquire the form of irregular plaques of the medial layer or discrete crosssectional rings, creating nodules. The process of calcification, in some cases, is perceptible in radiographic study. Although these lesions do not usually invade the vessel walls, the arteries affected may also develop atherosclerosis.2 Its etiology remains unknown.4 In our report, the patient was 64 years, did not have diabetes mellitus and had calcifications in the angiographic examination.

Lehto et al.7 demonstrated, in their study, that Monckeberg's arteriosclerosis is an independent risk factor for morbidity and mortality by cardiovascular events.

The few reports in the literature refer to lesions in lower limb arteries and, less frequently, in visceral arteries. Involvement of coronary, peripheral and visceral arteries by Monckeberg's calcification was described by Lachman et al.8 in 1977. Lanzer9 reported a case of Monckeberg's arteriosclerosis involving the aorta, pelvic and lower limb arteries. Couri et al.10 reported nonvascular involvement of soft tissues (pharynx and larynx) by Monckeberg's sclerosis.

Our report presents a patient with critical ischemia who progressed unfavorably for primary amputation, without having the traditional risk factors for the development of atherosclerosis (smoking, diabetes mellitus, dyslipidemia and hypertension). The explored arteries were much affected by a process of wall calcification, eliminating any possibility of revascularization. There was the formation of an unusual process of arteriosclerosis, different from the traditional atherosclerosis, which, through an anatomopathological study of the amputation piece, proved to be calcification of Monckeberg's medial layer.

We stress that Monckeberg's arteriosclerosis does not avoid the process of revascularization in all cases. There are situations in which it is possible to perform anastomoses, avoiding artery clamping. In other cases, as in ours, the impairment is so diffuse, thick and calcified that arteriosclerosis makes clamping and arterial revascularization impossible, being determinant for the indication of primary amputation.8.11 Shabat et al. report a case of rupture of the popliteal artery during orthopedic knee surgery due to the intense process of calcification of the arterial wall.12

We conclude that, in cases of patients with peripheral obstructive arterial disease with undefined etiology and absence of traditional risk factors, it should be remembered that calcification of Monckeberg's medial layer, despite being rare, can be the cause of peripheral vasculopathy. Further studies are needed for a better understanding of this disease, as well as to improve its diagnosis and treatment. 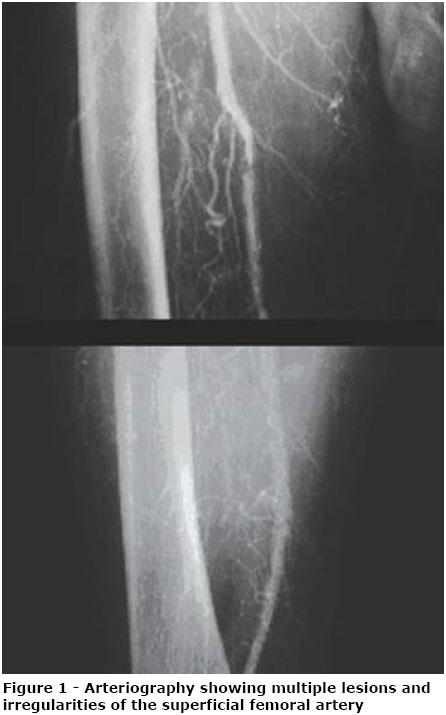 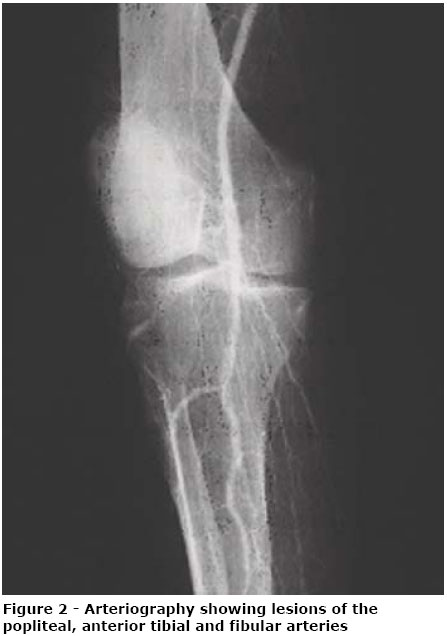 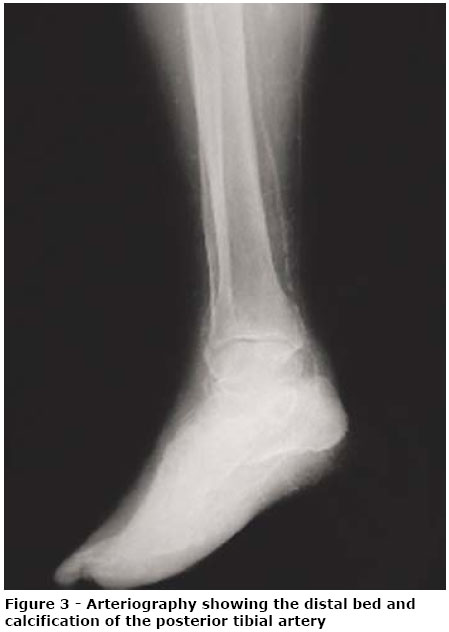