Traumatic knee dislocation is associated with massive muscle damage. When there are neurovascular lesions, prognosis is even worse and the limb viability is threatened. Popliteal artery lesions should be treated as soon as possible to prevent risk of limb loss, which can reach up to 80% in some case series. We report a case of a young patient who had traumatic knee dislocation associated with ipsilateral acetabular and femoral body fractures with late diagnosis (on the fifth day after the trauma) of popliteal artery lesion. The patient underwent limb revascularization with good outcome despite the severity of the lesion, which is in disagreement with the usual outcomes reported in the literature for the popliteal artery trauma with delayed treatment.

Traumatic knee dislocation is associated with massive muscle damage. When there are neurovascular lesions, prognosis is even worse and the limb viability is threatened. Popliteal artery lesions should be treated as soon as possible to prevent risk of limb loss, which can reach up to 80% in some case series. We report a case of a young patient who had traumatic knee dislocation associated with ipsilateral acetabular and femoral body fractures with late diagnosis (on the fifth day after the trauma) of popliteal artery lesion. The patient underwent limb revascularization with good outcome despite the severity of the lesion, which is in disagreement with the usual outcomes reported in the literature for the popliteal artery trauma with delayed treatment.

Traumatic knee dislocation is a rare condition1-3 usually provoked by high-energy traumas. It has a high morbidity when associated with other lesions and the appearance of early and late complications.4

Although most patients admitted in trauma centers are victims of contusion traumas, the diagnosis of closed vascular lesion of the limbs is uncommon.3 The association between knee dislocation and popliteal artery lesion may reach 60%.2

Popliteal artery lesion is, among all types of artery lesions, responsible for the highest number of amputations.1 In 10% of these lesions the patient may present with palpable distal pulses,1 which may delay the diagnosis.

This type of lesion has 40% of amputation risk.1 In case of late diagnosis and revascularization, this rate may reach 80% of the cases.2,4

Even in reference centers these lesions are complex and rare; thus, awareness at early diagnosis and adequate handling are fundamental in order to preserve the traumatized limb viability and function.

A 36-year-old male patient presented at the hospital after being hit by a car while riding a bicycle. At the emergency department, he was submitted to initial evaluation for polytraumatized patients without significant findings in other topography than left lower limb. He complained about pain and presented functional deficit of the referred limb.

At physical exam, obvious deformities of the left knee and thigh, swelling of the whole lower limb and good perfusion of the left foot were noted. In the medical files no specific data related to neurovascular exam at admission were found.

The case was assumed by the Orthopedics team, who diagnosed lateral dislocation of the left knee and ipsilateral acetabular and femoral dyaphiseal fractures.

On the third day of hospitalization, the patient was submitted to surgical treatment for the femoral dyaphiseal fracture. Compartment syndrome of left thigh and leg was diagnosed on the first postoperative day and a fasciotomy was performed on the thigh and anterior compartment of the leg.

On the first postoperative day after fasciotomy (fifth day after the trauma), the patient complained about paresthesis of the left foot; assessment of the vascular surgery was requested. The foot was pale and had delayed capillary filling, but also presented reduced pedal pulse and flow at Doppler on pedal, posterior tibial and fibular arteries; the left foot had a motor deficit, and temperature was slightly lower in relation to contralateral.

Arteriography showed popliteal artery lesion with occlusion at articular interline level and refilling by collaterals of the fibular, anterior and posterior tibial arteries, with incomplete filling of the plantar arch (Figure 1).

After the exam, a revascularization of the limb was indicated in a joint procedure with the Traumatology and Orthopedics team. After external fixation of the knee, the popliteal artery, in its supra and infragenicular portions, was treated with medial access. Infragenicular dissection also included the origin of the three main arteries of the leg.

A transverse arteriotomy was performed above the level of the ostium of the anterior tibial artery, followed by a thromboembolectomy with Fogarty catheter. A significant amount of thrombus was removed and proximal pulsatile arterial flow and good distal reflux were attained.

However, the artery presented a softened wall and pale coloration in this segment, reducing its reliability. Therefore, a reversed long saphenous vein graft from contralateral limb was inserted from supragenicular popliteal artery to tibiofibular trunk.

The infragenicular access was only partially closed and used as fasciotomy for the posterior compartments of the leg (Figures 2 and 3).

At postoperative, the patient kept the pedal and posterior tibial pulses full and good foot perfusion. On the seventh postoperative day after revascularization the patient did not present vascular problems; he remained being treated by the Orthopedics team for orthopedic lesions.

After a 6 months' evolution, the patient kept distal pulses palpable and satisfactory evolution of the knee articular mobility.

Traumatic dislocation of the knee is defined as loss of the normal anatomical relation of femorotibial articulation,5 which is a rare condition.1-3

Due to this articulation's great stability, low rates of dislocation are described in the literature, with a prevalence of 0.001 to 0.013% in patients with orthopedic lesions.1 Of a total of 2 million admissions at the Mayo Clinic from 1911 to 1960, only 14 knee dislocations were discovered.2

This dislocation is classified as anterior, posterior, lateral, medial and rotatory, according to tibia deviation in relation to the femur.5,6 Anterior dislocation is the most frequent and most frequently associated with popliteal artery lesion.6 In the case reported, the patient suffered a lateral dislocation, as showed in the arteriographic image without bone subtraction (Figure 1B).

The final result may vary, for the patient, from a satisfactory functional recuperation to amputation of the limb, depending on the extension of the trauma in relation to popliteal vessels, tibial and fibular nerves and ligamentous structures.4,6

Some studies refer 0 to 40% of involvement of popliteal artery related to neurovascular lesions; nervous lesions would occur in 16 to 43% of the cases. The most affected nerve is the common fibular nerve, especially in posterolateral dislocations.1 A recent study points to a 12-33% incidence of arterial lesion, and a 15-37% incidence of common fibular nerve.5 Lesions in these structures should be scanned in cases of knee dislocation.1,3,5

Five relevant rami arise from popliteal artery, located in the popliteal fossa: a pair of superior genicular arteries, a pair of inferior genicular arteries and a medial genicular artery. These arteries arise immediately above and below the knee articular interline and form its main collateral network. In addition, a communication system is supplied by the supreme genicular artery and by the descending ramus of the lateral circumflex femoral artery. Distally, collateral arteries anastomose with the anterior tibial artery through anterior recurrent tibial artery.6 This rich collateral arterial network explains why good foot perfusion, even with palpable distal pulse in around 10% of cases,1 as the one reported here, does not discard popliteal arterial lesion.1,6

Arterial trauma frequently arise from the stretching mechanism, once the artery is anchored superiorly to the adductors vessels and inferiorly to soleus muscle vessel or against the tibial plateau through crushing.4 Arterial disruption usually occurs in the emergence of rami or in aforementioned arterial fixation points.6

The treatment for knee dislocation is based on two pillars: the initial approach, which aims at the reduction and primary stabilization of the knee to avoid additional lesions, mainly neurovascular, and the definitive approach, based on ligaments repair, which may be performed during the acute phase (the first 3 weeks) or chronic phase (after 3 weeks).5 The treatment of ligamentous lesions is controversial2 and is not among the objectives of this study.

Dislocation should be immediately reduced; if necessary, in the emergency room with no anesthesia.6 If distal pulses cannot be palpated, distal perfusion scanning with Doppler should be performed.1 Absent pulses and unilateral audible Doppler signs require a complementary investigation.3 In cases of suspect lesions, immediate surgical exploration is advisable, which should be performed in the first 8 hours.1 The time elapsed before revascularization has an influence on its succes.4,7 Late revascularization is associated with amputation rates of 60-80%.4

It is questionable whether arteriography should be used or not; in some series it is routinely performed, in others, only for select cases. This exam is more helpful in revascularization control than in early diagnosis.1

In 2003, a series of 62 patients who had suffered contusion vascular trauma of the limbs was reported. Among them, 41 presented clear clinical signs of vascular trauma; the most common sign was the absence of distal pulse. The authors concluded that these findings, in case of fracture or dislocation, are sufficient to locate the vascular lesion and indicate surgical exploration.3

Nevertheless, the classical indication of arteriography for all the victims of knee dislocation is still defended by recent studies.6,7

One of the main drawbacks of performing arteriography in hemodynamics room would be the delay in treating the lesion, because the patient would have to be moved, as well as the physicians and equipments.3,6 To minimize the time of limb ischemia, arteriography could be performed by the surgeon in the emergency room or in the surgical center. This strategy may be particularly beneficial in cases associated with severe cranioencephallic or thoracoabdominal traumatisms.3

Once surgical treatment is indicated, it is important to fixate the articulation before performing the definitive vascular repair. However, arterial shunt may be necessary in cases of critical ischemia until the fixation is concluded.1

Damaged arteries usually need resection of the traumatized segment. If it is possible to perform a tension-free anastomosis, the operation is likely be successful.6 Yet, graft insertion is often necessary,3 preferentially on the long saphenous vein of contralateral limb.

Fasciotomy can also be liberally used3 in the treatment and prevention of compartmental syndrome resulting from reactive swelling, which affects the compartments after vascular reconstruction.1

Unfortunately, cases of vascular involvement in which the limb's viability is maintained despite late diagnosis, such as the one reported here, are rare.

For patients showing classical signs of associated vascular trauma, surgical exploration should be immediately performed, and arteriography, if indicated, should be intraoperative.

The literature does not present a consensus on arteriography use in cases in which these signs are not obvious, but the authors of this article advocate for its liberal use in cases of knee dislocation. 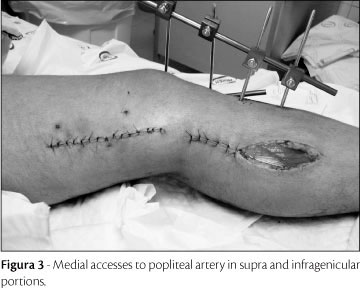