This paper investigates the dynamic pull-in instability of vibrating micro-beams undergoing large deflection under electrosatically actuation. The governing equation of motion is derived based on the modified couple stress theory. Homotopy Perturbation Method is employed to produce the high accuracy approximate solution as well as the second-order frequency- amplitude relationship. The nonlinear governing equation of micro beam vibrations predeformed by an electric field includes both even and odd nonlinearities. The influences of basic non-dimensional parameters on the pull-in instability as well as the natural frequency are studied. It is demonstrated that two terms in series expansions are sufficient to produce high accuracy solution of the micro-structure. The accuracy of proposed asymptotic approach is validated via numerical results. The phase portrait of the system exhibits periodic and homoclinic orbits. 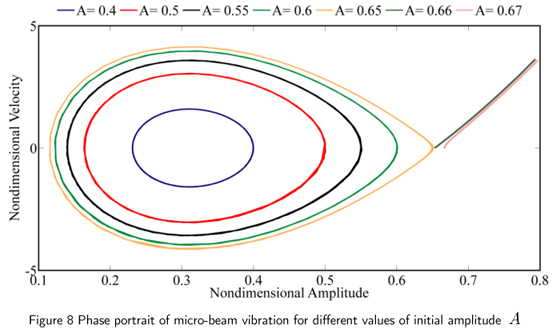