IDepartment of Pharmacology and Therapeutics, Institute for Medical Research and Training

Anaemia is a common complication of Plasmodium falciparum infections and a major contributor to morbidity and, to a lesser extent, mortality in children from areas endemic for P. falciparum (Murphy & Breman 2001, Crawley 2004, Nkuo-Akenji et al. 2006, Sowunmi et al. 2010). This condition is due, in part, to the destruction of infected erythrocytes, a shortened survival of uninfected erythrocytes and bone marrow dyserythropoiesis (White & Ho 1992, Price et al. 2001). P. falciparum-related anaemia is also often associated with an increased risk of gametocyte carriage (Price et al. 1999, von Seidlein et al. 2001).

Although anaemia in P. falciparum infections may be associated with an increased risk of gametocyte carriage (Price et al. 1999, von Seidlein et al. 2001), the availability of gametocytes in peripheral blood of the human host (from which the mosquito obtains a blood meal) is dependent on the interplay of emergence and clearance of the gametocytes. This interplay may be perturbed by antimalarial drugs used for therapy (Sowunmi et al. 2009a) or host immunity. It is currently unclear how P. falciparum malaria-associated anaemia influences these processes and how the condition impacts the gametocyte SR in malarious children undergoing therapy with artemisinins or artemisinin-based combination therapies (ACTs).

In the present study, we evaluate the relationship between anaemia, gametocytaemia and gametocyte SR in a group of children with apparently uncomplicated P. falciparum malaria who live in an endemic area of southwestern Nigeria; all patients were treated with artesunate or ACTs. The main aims were as follows: (i) determine gametocyte carriage, emergence and clearance of P. falciparum gametocytaemia in anaemic and non-anaemic children, (ii) evaluate the influence of anaemia on the population structure of P. falciparum gametocyte SR and (iii) examine any differences in the temporal changes in gametocyte SR of anaemic and non-anaemic malarious children during therapy to accurately describe any potential effects on transmission.

Patients - Patients were recruited from 2005-2010 at the malaria clinic of the University College Hospital in Ibadan, southwestern Nigeria, which is an endemic area for malaria (Salako et al. 1990). Patients were placed into various antimalarial efficacy studies involving artesunate or ACTs. Patients were enrolled if the following criteria were met: age 0.5-15 years, fever or history of fever in 24-48 h preceding presentation, pure P. falciparum parasitaemia > 2000/µL blood, absence of concomitant illness and written informed consent of a parent or guardian. Patients with severe malaria (Anon 2000) or serious underlying diseases (e.g., renal, cardiac or hepatic diseases) or severe malnutrition were excluded from the study. The study received approval from the local Ethics Committee (Ethics Committee, Ministry of Health, Ibadan, Nigeria).

Drug management - Drug treatment was administered according to standard schedules (Table I). Briefly, at presentation and for a few days after, depending on the treatment regimen, the children were given standard oral doses of artesunate or ACTs. At enrolment (day 0) and at follow-up days one-seven, 14, 21, 28, 35 and 42, patients underwent full physical examination and thin and thick blood films were examined for quantification of asexual and sexual parasitaemia.

Laboratory investigations - Quantification of asexual and sexual parasites in thick films was completed against both 500 and 1,000 leukocytes, assuming a leukocyte count of 6,000/µL blood. Asexual parasite clearance time was measured as the time from the start of anti-malarial treatment until the asexual parasite count fell below detectable levels in a peripheral blood smear. Gametocyte clearance time was measured as the interval between the first and last positive gametocyte smears.

All gametocytes were sexed if gametocytaemia was > 10/µL in blood and according to the following criteria (Carter & Graves 1988): males (microgametocytes) are smaller than females (macrogametocytes), the nucleus is larger in males than females, the ends of the cells are rounder in males and more angular in females, the cytoplasm stains purple in males and deep blue in females with Giemsa and the granules of malaria pigment are centrally located in females and more widely diffused in males. Gametocytes were sexed if at least three of the five criteria stated above were present. The SR was defined as the proportion of gametocytes in peripheral blood that were male (Pickering et al. 2000, West et al. 2001, 2002). The SR was considered to be male-biased if it was > 0.5.

Capillary blood collected before and during follow-up was used to measure packed cell volume (PCV). PCVs were measured using a microhaematocrit tube and a microcentrifuge (Hawksley, Lancing, UK).

Data analysis - Data were analysed using version 6 of the Epi-Info software (Anon 1994) and the statistical programme SPSS for Windows version 10.01 (Anon 1999). Variables considered in the analysis were related to the densities of P. falciparum gametocytes and trophozoites. Proportions were compared by calculating Χ2 with Yates' correction or by the Fisher exact test. Normally distributed continuous data were compared by Student's t-test and analysis of variance. Data not conforming to a normal distribution were compared using the Mann-Whitney U-test, the Kruskal-Wallis test or the Wilcoxon ranked sum test. The relationship between the gametocyte SR and clinical or parasitological parameters was assessed via linear regression. A multiple logistic regression model was used to test the association between gametocytaemia (yes or no at presentation or following treatment) and factors that were significant at univariate analysis (i.e., age, haematocrit and parasite density). Because the study was conducted over a period of five years, time in years since the commencement of study was included as a covariate in the model. p values of < 0.05 were considered to be statistically significant. Data were (double) entered serially using the patients' codes and were only analysed at the completion of the study.

Patients - Eight hundred and forty children with acute malaria caused by P. falciparum infection were included in the study for the purpose of multivariate analysis of risk factors for gametocyte carriage. Of these, 802 had haematocrit measurements. The characteristics of the 802 children with acute malaria who were enrolled in the study are illustrated in Table II. Asexual parasitaemia cleared within two days in both anaemic and non-anaemic children (Table II).

In most malarious children and adults, virtually all of the gametocytes seen in the periphery emerge within one-week after the initiation of treatment (Piyaphanee et al. 2006, Sowunmi et al. 2009c). In the present cohort, over 95% of the gametocytes had emerged in the periphery by day five post-treatment. However, the emergence of gametocytes was significantly more frequent in anaemic compared with non-anaemic children, thus suggesting that anaemia significantly impacts the release of gametocytes into circulation. Although the viability of the emerging gametocytes was not evaluated, if they were viable, ingestion by the mosquito vector would be expected to contribute to transmission, at least during the first week following commencement of treatment. Anaemia may trigger the conversion of asexual parasites into gametocytes in vitro (Ifediba & Vanderberg 1981). It is plausible that this process preceded the release into the peripheral circulation during the first week of observation in this cohort of children. However, the exact reasons are not apparent from the current data. If this were the case, then it may explain the significantly more frequent emergence of gametocytes in anaemic children during the first week of follow-up. A remote possibility is that the artemisinin derivatives in ACTs accelerate the conversion of asexual parasites into gametocytes and clear these gametocytes rapidly. This conversion process may be more pronounced in anaemic children.

Population structure analysis of gametocyte SR at enrolment showed that the weighted SR and inbreeding rates were similar in anaemic and non-anaemic children. These findings suggest a relative lack of effect of anaemia on transmission in this cohort. The overall weighted mean population SR of 0.34 and of 0.32 and 0.33, respectively, in anaemic and non-anaemic children, suggest that the maximum degree of female bias expected if the number of viable gametes released after ex-flagellation by one male gametocyte was approximately 2 (Read et al. 1992). In this context, it would appear that the presence of anaemia at presentation in these children did not provoke a significant degree of ex-flagellation. The reasons for this observation remain unclear. The maximum degree of gametes released was found to be less than 3.5, which is the amount recently reported in the same area of study (Sowunmi et al. 2009b). Additionally, this SR value is higher than that reported from both Cameroun (0.217) (Robert et al. 1996) and Papua New Guinea (0.18) (Paul et al. 1995), but somewhat similar to that reported from Senegal (0.346) (Robert et al. 2003).

Interestingly, in half of the anaemic children and one third of the non-anaemic children, no male gametocytes were found. Similarly, in one third of the anaemic children and in one fifth of the non-anaemic children, no female gametocytes were found. With both SR extremes, it is difficult to conceive of how these parasites would transmit. Obviously, in terms of overall proportion, parasite non-transmissibility is similar in anaemic and non-anaemic children. The very low frequency of SR of 0.5 at enrolment in anaemic and non-anaemic children suggests that gamete combination from multiple genotypes (clones), which maximises genetic representation of each clone in the zygote population, is uncommon. Proportion-wise, this should influence the fitness of the parasite to transmit. The low frequency of a SR of 0.5 in the pre-treatment parasite populations suggests that, overall, inbreeding is relatively common. Inbreeding rates in our data series were calculated from the SR data, a relatively inexpensive and facile method of indirectly estimating this rate (Nee et al. 2002).

It is generally known that during animal infections, a female-biased SR decreases as a response to anaemia, parasite density, host immune response or competition from other parasite genotypes (Paul et al. 2000, Reece et al. 2008, Sowunmi et al. 2009b). Although competition from other parasite genotypes was not evaluated in the present study, a less female-biased SR was observed in anaemic children when compared to non-anaemic children during follow-up. The possible reasons for this observation are as follows: an increased erythropoietin (EPO) secretion and release in anaemic children [in lower animals, increased (EPO) in secretion in response to anaemia is associated with a less female-biased sex allocation] (Paul et al. 2000) and a blunting of the tendency of ACTs to selectively favour the emergence of a female-biased SR following treatment (Sowunmi et al. 2007, 2009a). In the latter context, further exploration of the interaction(s) between anaemia and ACT treatment on SR is urgently needed. There may be significant policy implications of the present findings in regions where malaria-associated anaemia is common and where ACTs, the recommended first line treatment of malaria globally (WHO 2001), are used. Artemisinin drugs are gametocytocidal for immature, but not mature gametocytes (Kumar & Zheng 1990), and ACTs reduce mosquito infectivity following treatment when compared to non-ACTs (Sutherland et al. 2005, Okell et al. 2008). It follows that early diagnosis and prompt treatment of infection using ACTs may aid in this setting.

In general, gametocytaemia was low in the present cohort of children (Table II). If increasingly male SR do give higher transmission success at lower gametocytaemia (Mitri et al. 2009), it is conceivable that in malaria-endemic areas, where malarial anaemia is relatively common and is associated with increased risk of gametocyte carriage, transmission may be enhanced in anaemic children, provided that the gametocytes are viable. Therefore, our findings may have significant implications for malaria control in many endemic countries/regions.

There are limitations of our study. One such limitation is that EPO levels were not measured; it was therefore impossible to relate the changes in gametocyte emergence and SR to EPO secretion. A further limitation was the lack of clonal data in the children, thus making it difficult to assess the relationship between anaemia, clonal multiplicity and SR. Further studies are now needed to determine whether gametocytes obtained from anaemic children from this endemic area are more infectious to mosquitoes than those from non-anaemic children. Determination of whether submicroscopical gametocytaemia is more common in anaemic children is also warranted. 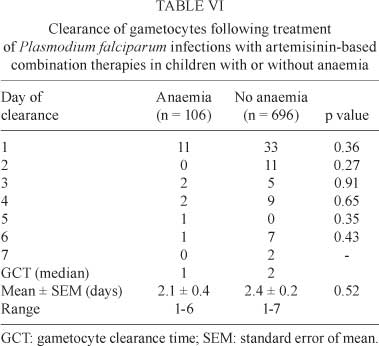