Random amplified polymorphic DNA analysis was applied to DNAs extracted from Trichuris trichiura eggs recovered from human fecal samples. Four out of 6 primers tested displayed 18 distinct and well defined polymorphic patterns, ranging from 650 to 3200 base pairs. These results, upon retrieval and DNA sequencing of some of these bands from agarose gels, might help in establishing T. trichiura specific genetic markers, not available yet, and an important step to design primers to be used in molecular diagnosis approaches.

Random amplified polymorphic DNA analysis was applied to DNAs extracted from Trichuris trichiura eggs recovered from human fecal samples. Four out of 6 primers tested displayed 18 distinct and well defined polymorphic patterns, ranging from 650 to 3200 base pairs. These results, upon retrieval and DNA sequencing of some of these bands from agarose gels, might help in establishing T. trichiura specific genetic markers, not available yet, and an important step to design primers to be used in molecular diagnosis approaches.

Human trichuriasis is an infection caused by the nematode Trichuris trichiura. It has a high prevalence, reaching nearly 1 billion people worldwide (Pedersen & Merrel 2001). It is one of the most important gastrointestinal infections, although asymptomatic in most of the cases. However, some hosts may exhibit mild symptoms, such as poor nutrition and anaemia, or severe ones such as ulcerative colitis and rectal prolapse (Bundy & Cooper 1989, Ramdath et al. 1995, Williams-Blangero et al. 2002).

This human helminthic infection is transmitted from host to host with obligatory passage in the soil. The eggs passed in faeces embrionate only in soil conditions which include temperature at an average of 22ºC, under humidity, and adequate oxigenation.

The attempts to recover or concentrate helminth eggs from soils or host faeces have been investigated by several authors (Wassal & Denham 1969, Dada 1979, Egwang & Slocombe 1982, Foreyt 1986, Wong & Bundy 1990, Bawden 1994, Alaja & Asaolu 1995, Ybañez et al. 2000). Different isolation methods as filtration, washing, and flotation in saturated salt or sugar solutions have shown satisfactory results, presenting however different recovery yields (Ybañez et al. 2000). The efficiency of these techniques assists the analysis of the presence of these eggs in the soil, allowing the assay of factors of risk for the transmission of infections among different vertebrate hosts and humans.

The utilization of molecular biology techniques brought new to different biomedical areas. Methods to extract DNA of different evolutive forms of parasites in fecal samples of human beings (Silva et al. 1999), or other animals (Schneider et al. 1999) have allowed the use of molecular tools for the diagnosis of several organisms. With the application of the polymerase chain reaction (PCR) it was possible to extend these studies.

The PCR technique has been used to detect DNA of diverse organisms, facilitating the biological diagnosis of the parasites in tissues and secretions. The use of this technique for the investigation of DNA of Echinococcus multilocularis in fecal samples of fox (Bretagne et al. 1993, Monnier et al. 1996, Dinkel et al. 1998), allowed sensible and specific diagnosis for infections caused by this parasite. The amplification of DNA of Trichinella spiralis in larvae encysted in human host muscles or experimentally infected mice, and the identification of different isolates of this helminth, are advantages provided by this technique (Robert et al. 1996, Uparanukraw & Morakote 1997, Nagano et al. 1999).

Another important application of the PCR is the differentiation of helminth species that are morphologically indistinct. Zarlenga et al. (1991, 1994), through this technique were able to genetically differentiate Taenia saginata from Taenia asiatica and Haemonchus contortus from Haemonchus placei.

When the target sequence is unknown, the random amplified polymorphic DNA (RAPD-PCR) technique (Williams et al. 1990) is useful. This technique can be distinguished from the other PCR techniques by using a single very short arbitrary oligonucleotide, generally with 10 bases (Ferreira & Gratapaglia 1996). This is in contrast to the others that require information regarding the target DNA for the specific drawing of primers. It is a fast methodology requiring small amounts of DNA, and has been widely used allowing accomplishment of studies of genetic analysis in diverse species. Studies with parasite nematodes of plants and humans demonstrate its great efficiency in the differentiation of profiles of amplification, and capability to distinguish polymorphisms between organisms (Chacón et al. 1994, Dupoiy-Camet et al. 1994, Jobet et al. 1998). Another useful technique is RFLP-PCR (restriction fragment length polymorphism) by which differences in restriction sites of four species of the genus Trichuris were observed (Oliveros et al. 2000).

In the field of the paleoparasitology, despite the use of efficient paleoparasitological techniques, it is often difficult to identify the parasites found. The molecular methodologies have been shown to be specific and sensitive with modern organisms. For this reason molecular methods have been employed in paleoparasitology to identify species that can not otherwise be diagnosed through morphological examination. Molecular biology can recover parasite DNA from archaeological material. These molecular techniques have allowed the diagnosis of fragments of genetic material (DNA) of parasites in bones, other mummified tissues, and experimentally dehydrated excrements (Bastos et al. 1996, Ferreira et al. 2000). Methods of DNA extraction from helminth eggs recovered from fresh or desiccated faeces (coprolites) of different hosts have been devised (Chacón et al. 1994, Loreille et al. 2001).

The objective of this work is to standardize an appropriated technique to recover T. trichiura eggs from human fresh fecal samples, isolate the DNA from the recovered eggs, and apply molecular techniques to promote conditions of amplification of this genetic material (RAPD).

The recovery of eggs was accomplished with saturated sugar solution flotation, originally developed by Gordon and Whitlock (1939), modified by Ueno and Gonçalves (1994), and adapted to our work. This method consists of the dilution of a portion of faeces in distilled water, and filtered through folded gauze. The filtrate was centrifuged for 5 min at 2500 rpm, to eliminate impurities. The supernatant was discarded and the sediment was transferred to conical glass jars. To these jars, a saturated solution of sugar (density above 1,180) in the ratio of 10 ml of the solution for each gram of initial faeces, was added. The jars were refrigerated (4ºC) for 24 h. The supernatant was transferred to new conical glass jars and diluted in an equal volume of distilled water. To the sediment, a volume of distilled water equal to the previous supernatant was added. This process of sedimentation was repeated twice. The sediment was resuspended in 70% ethanol for the elimination of bacteria. The resultant pellet was passed to a centrifuge tube, washed with water and centrifuged for 2 min at 2500 rpm three times. The residue was transferred to centrifuge microtubes, and water was added until a final volume of 1 ml was obtained. Fifty microliters of the sediment were observed with a light microscope at 100 x and 400 x magnification. The amount of eggs found was multiplied by 20 to estimate the total number of eggs. After quantification, the material was centrifuged at 16,000 g for 1min, the supernatant discarded and the pellet stored at -4o C.

Extraction and quantification of DNA fromTrichuris trichiuraeggs - The frozen sediment was thawed at room temperature and washed five times with distilled water in a microcentrifuge at 16,000 g. Genomic DNA was extracted according to the protocol of Sambroock et al. (1989) with modifications. The following solutions/reagents were added to the sediment: 400 µl of 50 mM Tris, 1 mM EDTA, pH 8.0 (TE), 25 µl of 10% SDS, 2 µl of proteinase K (100 µg / ml), 4 µl of RNase A (20 mg/ml) diluted in TE. The material was incubated for 2 h at 37ºC, after this procedure 400 µl of Tris buffered phenol-chlorophorm solution (pH 7.8) was added. Following extraction the DNA was precipitated in the presence of ammonium acetate (3M pH 5.2), isopropanol (0.7 vol.), and centrifuged for 3 min at 16,000 g. The pellet was washed with 1 ml of 70% ethanol and resuspended in 100 µl of 50 mM/50 mM EDTA and quantified by spectrophotometer analysis (Gene Quant Pharmacia Biotech®).

RAPD - Six oligonucleotides were selected for RAPD analysis. Its sequences and respective publications are showed in the Table.

The fecal sample chosen weighed 25 g with 1.248 eggs per gram of faeces, performing a total of 31,200 eggs. The percentage of T. trichiura eggs recovered through the flotation technique in sugar saturated solution was 11.7% (3,660 eggs).

The RAPD assays carried out with the oligonucleotides cited in Table resulted in a total of 18 distinct RAPD marker patterns ranging in size from 650 to 3200 base pairs with 4 different polymorphic patterns (Fig. 2).

The 11.3% rate of recovered eggs of T. trichiura from faeces was low compared with other authors that report yields from 25% to 99% (Foreyt 1986, Ybañez et al. 2000). However, these yield allowed us to efficiently concentrate T. trichiura eggs and extract high molecular weight DNA in an independent fashion relative to the number of eggs isolated from fecal samples ranging from 140 eggs/sample to 660 eggs/sample (Fig. 1).

Sometimes, the application of molecular methodology in faeces is hampered by components that may act as strong inhibitors of the Taq DNA polymerase, often employed for the RAPD assays. Another difficulty found was the standardization of the amount of DNA to be used in the reactions, as the excess or paucity of these molecules may compromise the efficacy of the method.

The primers used were selected from the literature according to their ability to amplifly by RAPD species of the genus Trichinella, superfamily Tricuroidea, in which the genus Trichuris is included. Positive and distinct polymorphic patterns were observed for the primers M1, M are, G7 e G18, in agreement with the results from Rodriguez et al. (1996) who were able to amplify DNA from Trichinella with the primers M1 and M are, and Humbert and Cabaret (1995) who applied G7 and G18.

The more intense RAPD bands visualized on agarose gel electrophoresis were purified and will be cloned and subjected to automated DNA sequencing for obtaining species specific primers. This study aims to establish T. trichiura specific molecular markers. To evaluate the specificity of these markers, they will be applied to different species of this helminths from different hosts. This molecular methodology will be applied to paleoparasitology for the evaluation of experimentally dehydrated fecal samples obtained in our labs as well as for the naturally desiccated ones (coprolites) from South American archaeological sites dating of different periods, to confirm or not morphometric diagnosis already obtained for the eggs of this helminth.

This work was supported by Capes and Fiocruz. 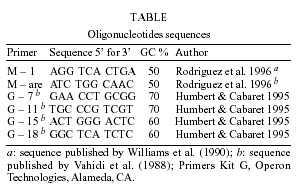