There is evidence of the medicinal use of various plants since pre-history (Cowan 1999). The medicinal use of Drosera sp. extracts has been mentioned in the literature since the XVI century as an important antitussive for different respiratory diseases, including tuberculosis (Schnell 1984). The antimicrobial activity of extracts of aerial parts of D. peltata against oral bacteria has also been investigated (Didry et al. 1998). Tinctures prepared with D. rotundifolia leaves may also be used for the treatment of various respiratory diseases (Blumenthal et al. 1998). Since the advent of antibiotics, in the fifties, the use of plant derivatives as antimicrobials has been very limited. However, in recent years, the upsurge of bacterial resistance to antimicrobial drugs has stimulated the search for new drugs of plant origin. The worldwide emergence of Haemophilus, Klebsiella, Escherichia coli, and many other b-lactamase producers became a major therapeutic problem. Methicillin-resistant strains of Staphylococcus aureus are widely distributed in hospitals and are increasingly being isolated from community-acquired infectious strains. Vancomycin-resistant Enterococci and Ente-robacter spp. resistant to most of the known drugs including quinolones, macrolides, cell wall inhibitors, have all increased dramatically over the past decade. Given the evidence for the rapid global spread of resistant clinical isolates and the appearance of drug resistant strains among community acquired infections, the need for discovery or development of new antimicrobial agents active towards these resistant strains is of paramount importance (Bradford 2001). For this reason the search for new antimicrobial drugs among plants became an important alternative. As part of our investigation on the antibacterial properties of plants, a phytochemical study based on the bioactivity screening of five different crude extracts from each of the eight Brazilian Drosera species, was undertaken.

Plant material - The carnivorous plant species were collected in the region of Ponta Grossa, in the state of Paraná, Southern Brazil, and identified by specialists. Voucher specimens of those species with medicinal use were deposited in the Herbarium of the State University of Londrina.

Susceptibility testing - Tests were performed by adding 0.5 ml of each plant extract to 15 ml of melted and cooled Muller Hinton Agar (MHA) and poured into Petri dishes (pour plate technique). Young bacterial cultures (log phase) in Muller Hinton Broth, at 36ºC, were streaked with a standardized loop (10 µl) on MHA with incorporated plant extracts and incubated over-night at 36ºC. Growth inhibition was observed after 18 h compared to bacterial growth in MHA without plant extracts.

Best results were obtained with ethyl acetate extracts from D. montana var. montana and D. communis, as shown in the Table. With the exception of K. pneumoniae (sensitive), the other gram-negative bacteria were resistant to all extracts (P. aeruginosa, E. coli, S. choleraesuis). Among gram-positive bacteria, S. aureus was susceptible at least to one and up to three extracts (hexane, ethyl acetate, and methanol). C. albicans, a yeast, was also susceptible to at least one extract of the species. We consider these as preliminary results and a larger number of bacterial isolates must be tested, with different concentrations of plant extracts in order to establish their real antimicrobial activity. Another feature to be determined is the relation between extract concentration and bacteriostatic or bactericidal effect. The isolation of the naphthoquinone plumbagin (1), from D. communis, D. montana var. montana, and D. brevifolia, together with the non detection of this naphthoquinone in D. villosa var. villosa, are in agreement with the tests accomplished in this study and with the studies on the antimicrobial activity of hydroxy-naphthoquinones described in the literature (Didry et al. 1998). The antimicrobial activity of D. villosa var. villosa towards S. aureus is consistent with the presence of 3b-O-acetylaleuritolic acid as described in the literature (Peres et al. 1997 ). 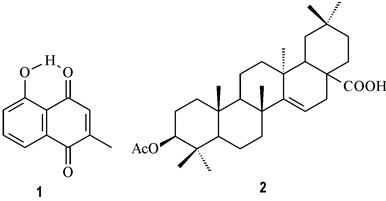