Feeding ecology of Leporinus taeniofasciatus (Characiformes: Anostomidae) before and after installation of a hydroelectric plant in the upper rio Tocantins, Brazil

The feeding ecology of Leporinus taeniofasciatus in the upper rio Tocantins was characterized before (river phase) and after (reservoir phase) its impoundment by the Serra da Mesa Hydroelectric Dam. The importance of each food item was given by the Alimentary Index (IAi), which combines the frequency of occurrence and volumetric methods. A significant difference in the diet of L. taeniofasciatus between seasons in the river phase, detected by a multivariate analysis of variance, was not kept when the reservoir was formed. Its feeding activity, verified through the percentage of stomachs with different degrees of fullness, was not affected by the impoundment. Leporinus taeniofasciatus was able to incorporate terrestrial food items to its diet when they became abundantly available at the beginning of reservoir formation. Despite this plasticity, secondary factors such as predation and competition might have affected its adaptation in the new, more homogeneous environment. Its diet was not significantly different in the lotic sites between the distinct phases, suggesting that the remaining upstream lotic environments still provide favorable conditions for this species, reinforcing the need to preserve those habitats, as L. taeniofasciatus, which is apparently endemic to the Tocantins basin, may be threatened. 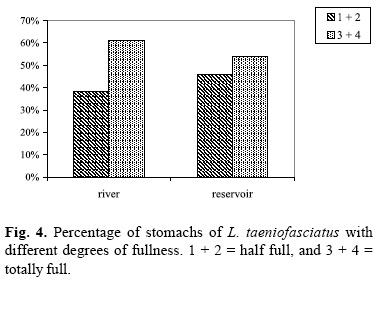