This study aims to determine the importance of different environments of the Ligeiro River (upper Uruguay River, Brazil) in fish reproduction. For this purpose, three environments (sampling sites) were selected: rapids, a pool, and the mouth of the Ligeiro River. Ichthyoplankton, zooplankton, and benthos were sampled six times per month from September, 2006 to March, 2007. Zooplankton and ichthyoplankton samples were collected early in the evening with plankton nets (64 µm and 500 µm, respectively). Benthos samples were also collected early in the evening with a Van Veen dredge. Local abiotic variables (temperature, dissolved oxygen, pH, electrical conductivity, water speed, alkalinity, water hardness, and water transparency) were measured simultaneously with the biotic data sampling and were complemented by regional variables (water flow and precipitation). A total of 43,475 eggs and 2,269 larvae were captured. Of these larvae, 80.1% were in the pre-flexion and larval yolk stages. Digestive tract content showed that the greatest degree of repletion among the larvae in more advanced phases occurred in the pool environment. Water speed was the main characteristic used to differentiate the river's rapids and mouth from the pool. The abundance of zooplankton and benthos was not related to the distribution of densities among the different components of the ichthyoplankton. A greater abundance of eggs and larvae with yolk was found in the rapids and river mouth. Ordination analyses showed a connection between the advanced stage larvae and the pool environment. In conclusion, the rapids and river mouth of the Ligeiro River's are important locations for fish reproduction, particularly in regard to spawning and drifting of the ichthyoplankton's initial stages, whereas the pool represents a nursery place for larval growth. 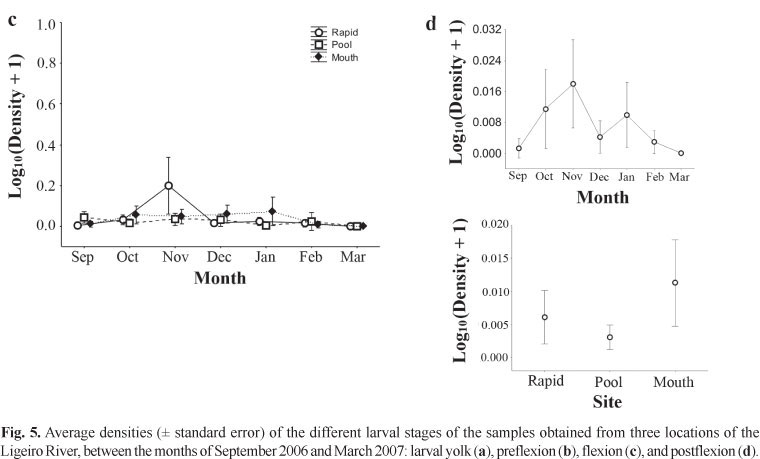