Amazonspinther dalmata, a new miniature characid from the streams of rio Purus and rio Madeira, right bank tributaries of the rio Amazonas, is described as a new genus and species of the subfamily Cheirodontinae. The unique characters of the new genus and species are the three remarkable black blotches on the base of the dorsal, anal, and caudal fins, the anteriormost proximal radial of the anal fin with an anteriorly extended lamina entering the abdominal cavity, and the extremely elongate caudal peduncle. The reduced number of ventral procurrent caudal-fin rays (7-9), and the hemal spines of only posterior one, two, or sometimes three caudal vertebrae directly articulating with the ventral procurrent caudal-fin rays further diagnoses the new taxon from remaining genera of the tribe Cheirodontini. The results of a phylogenetic analysis strongly support a close relationship between A. dalmata and Spintherobolus in the tribe Cheirodontini on the basis of fifteen unambiguous synapomorphies. Ten of these characters, previously hypothesized as exclusive synapomorphies for Spintherobolus, were now also identified in Amazonspinther, such as the pattern of exposed neuromasts on the head, the presence of a second pseudotympanum anterior to the first pleural rib, and the nearly discoidal coracoid bone. A discussion about the phylogenetic position of the closely related fossil †Megacheirodon to Spintherobolus and Amazonspinther is also provided. Convergent characters shared between Amazonspinther and the characid Priocharax are discussed in relation to miniaturization. Biogeographical implications of the diversification of Amazonspinther, Spintherobolus, and Megacheirodon lineages are discussed. 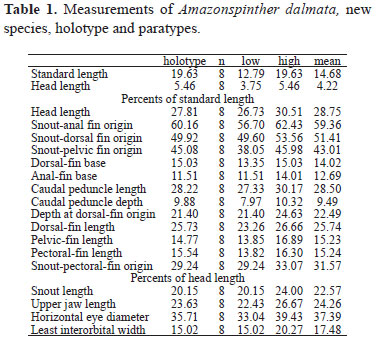