Since the 1940’s, multiple classes of auxin herbicides were developed, which revolutionizing agricultural practices and weed management (Troyer, 2001Troyer J.R. In the beginning: the multiple discovery of the first hormone herbicides. Weed Sci. 2001;49:290-7.). The classic synthetic auxins herbicide is the 2,4-D, with a structure similar to the indole-3-acetic acid (IAA), its exogenous application promotes hormonal unbalance in plants, increasing the 1-aminocyclopropane-1-carboxylic acid synthesis production, which, increases the production of ethylene, thus resulting ilant’s death (Grossmann, 2010Grossmann K. Auxin herbicides: current status of mechanism and mode of action. Pest Manage Sci. 2010;66:113-20.).

New auxin herbicides have been developed, such as the halauxifen-methyl, the first active ingredient of the chemical group arylpicolinate. The halauxifen-methyl may be uptaken by the leaves and translocated through the phloem and the xylem, accumulating in the meristematic tissue. It also degrades quickly in the soil and in the straw and has a broad control spectrum in broadleaf weeds (EFSA, 2015European Food Safety Authority - EFSA. Conclusion on the peer review of the pesticide risk assessment of the active substance halauxifen-methyl (XDE-729 methyl). 2015. [accessed in: December 06 2016]. Available at: <Available at: http://www.efsa.europa.eu/sites/default/files/scientific_output/files/ main_documents/3913.pdf .
http://www.efsa.europa.eu/sites/default/... ). The symptoms are similar to other auxin herbicides: hyponastic response, deformation, necrosis and eventual death.

Currently, the Conyza spp. is the most prominent weed species present in the Brazilian agricultural system. The use of auxin herbicides is essential for its effective control as well the applications in early development stages (Constantin et al., 2013Constantin J. Manejo de buva na entressafra. In: Constantin J. et al. Buva: fundamentos e recomendações para manejo. Curitiba: Omnipax, 2013. p.41-64.). Glyphosate resistant hairy fleabane and sumatran fleabane biotypes resistant to glyphosate and chlorimuron were identified in the State of Paraná (Santos et al., 2014aSantos G. et al. Multiple resistance of Conyza sumatrensis to Chlorimuron-ethyl and to glyphosate. Planta Daninha. 2014a;32:409-16. ), making it harder for the agricultural system to control the species. So, herbicides like the auxins, with affinities to distinct locations in the metabolic path, may reduce the risk to select resistant biotypes. For instance, the halauxifen-methyl herbicide may be an effective new tool to manage resistant weeds, due to its higher affinity to the AFB5 protein.

The field experiment was carried out in Toledo (PR) (24o67’86.7" S; 53o78’86.8" W), from 06/27/2016 to 09/02/2016. The soil in the experimental site was classified as Clay Latosol (713 g kg-1 clay, 144 g kg-1 silt, 143 g kg-1 sand). The area’s predominant climate is the Cfa in Köppen climate classification - humid subtropical, with hot summers, rare occurrence of frost and rain tending to concentrate along the southern hemisphere summer. During the warm months, the average temperature is higher than 22 oC. During the cold months, the temperatures fall below 13 oC. The average annual rainfall ranges from 1600 to 1800 mm (IAPAR, 2014Instituto Agronômico do Paraná - IAPAR. Cartas Climáticas do Paraná - Precipitação. 2014. [accessed in: November 25 2016]. Available at: Available at: http://www.iapar.br/modules/conteudo/conteudo.php?conteudo=595 .
http://www.iapar.br/modules/conteudo/con... ). Local rainfall data for the field study period are presented in Figure 1.

Immediately before application, ten plants representative of each stage were marked for posterior evaluation. Each experimental unit comprised a 4.0 meters wide by 5.0 meters long area. In each plot, 0.5 meter were excluded from both extremities, resulting in a 15 m2 working area.

The herbicide applications were carried out using a backpack CO2 pressure sprayer under 36 lb pol-2, equipped with a six AIXR 110.015 tips bar, spaced by 0.5 m (resulting in a 3 meters application range). This setup allows an output volume of 100 L ha-1 rate. During the application, the soil was humid, the air temperature varied between 23 and 27 ºC, the relative humidity was 62% and the winds varied between 1.2 and 1.9 km h-1.

The sumatran fleabane control level was evaluated simultaneously for all plants, considering the distinct development stages previously selected (factor A). Evaluation occurred at 5, 10, 15, 20, 25, 30, 35, 40, 45 and 50 DAA (Days After [herbicide] Application). This evaluation was carried out by visual inspection, classifying each plant in a scale ranging from 0 to 100%, 0% meaning that the plant presents no symptom and 100% meaning the plant is dead (SBCPD, 1995Sociedade Brasileira da Ciência das Plantas Daninhas - SBCPD. Procedimentos para instalação, avaliação e análise de experimentos com herbicidas. Londrina: 1995. 42p.). The control evaluation was carried out taking as reference the area infestation, calculated from the existing weed samples in the non-sprayed untreated area.

At 60 DAA, the shoot of ten marked plants of each plot were collected, packed in paper bags and placed in a air circulating greenhouse, until a constant weight was obtained. Afterwards, the plants were weighted to determine the dry mass weight, expressed in grams per plant.

The control data was analyzed regarding its normality using the Shapiro-Wilk test on the raw data. After the F-test variance analysis, a regression analysis was carried out on the significant data, using the SigmaPlot 10.0 software (Sigmaplot, 2007SigmaPlot. Scientific Graphing Software. Version 10.0. 2007.). The data of dry mass weight and the final control rate at 50 DAA, were submitted to the Tukey test (p?0,05).

The herbicide treatments tested here were always associated with the glyphosate, as this region has a high sumatran fleabane (C. sumatrensis) infestation history that with the application of glyphosate alone, at rates up to 4,800 g e.a. ha-1, being reportedly ineffective. In the Toledo-PR region there are reports of glyphosate and chlorimuron-ethyl resistant C. sumatrensis plants (Santos et al., 2014aSantos G. et al. Multiple resistance of Conyza sumatrensis to Chlorimuron-ethyl and to glyphosate. Planta Daninha. 2014a;32:409-16. ). According to the normality test, the data presented a normal distribution (p?0,05). The variance analysis shows that all interaction between treatments and the sumatran fleabane developments stages were significant (Table 2).

Thumbnail
Table 2
p-values for ANOVA analysis of the treatments and stages evaluated in the sumatran fleabane control experiment, Toledo (PR), 2016

According to Constantin et al. (2013Constantin J. Manejo de buva na entressafra. In: Constantin J. et al. Buva: fundamentos e recomendações para manejo. Curitiba: Omnipax, 2013. p.41-64.), the horseweed size at the moment of application has a fundamental influence in the herbicide efficiency. The data of control for stage 1 shows the differences in the speed of control, expressed in the respective treatments equations (Figure 2). For glyphosate + 2,4-D at 1,440 + 806 g e.a. h-1, 80% control was obtained at 25 DAA and the maximum control at 32 DAA; after this point, this treatment showed decrease in control. This is due to the plant’s ability to metabolize the herbicide and, consequently, regrowth.

For the treatments based on halauxifen-methyl + diclosulam, a high control level was observed in both rates: a control above 90% was reached at 25 DAA and at 40 DAA the control was 98% (Table 3). In the treatments of halauxifen-methyl + 2,4-D formulation, there were no observed differences of control between the two rates tested, which the control of sumatran fleabane was 97% at 50 DAA. The application of 5.0 g i.a. ha-1 halauxifen-methyl rate resulted in 84% control, but in this treatment there is a risk of regrowth (Oliveira Neto et al., 2010Oliveira Neto A.M. et al. Manejo de Conyza bonariensis com glyphosate + 2, 4-D e amônio-glufosinate em função do estádio de desenvolvimento. Rev Bras Herb. 2010;9:73-80.). However, the treatment containing 6.0 g i.a. ha-1 of halauxifen-methyl in the stage 1,the control was completely effective, reaching a 96% average at 50 DAA.

Treatments containing glyphosate + 2,4-D did not show acceptable control levels, above 90%, for stage 3 (Figure 4, Table 5). The treatment containing 2,4-D rates reached a maximum control level of 66% at 27 DAA, with a control decrease afterwards due to plants regowth. The glyphosate association + 2,4-D at 1,440 + 1,209 g e.a. ha-1 achieved a 74% maximum control at 27 DAA. It is known that for the control of advanced stage of sumatran fleabane, with plants above 20 cm, only one application may not be enough. In these cases, a first sequential application of systemic herbicides is recommended, followed by a contact application 7 to 15 days after the first treatment (Constantin et al., 2013Constantin J. Manejo de buva na entressafra. In: Constantin J. et al. Buva: fundamentos e recomendações para manejo. Curitiba: Omnipax, 2013. p.41-64.).

The final control evaluation (at 50 DAA), presented in Table 6, shows that the plant development stage at the time of application is a fundamental variable for sumatran fleabane control, specially when using glyphosate + 2,4-D associations. For stage 1 plants, the glyphosate + 2,4-D at 1,440 + 943 and 1,440 + 1,209 g e.a. ha-1 formulations showed a statistically acceptable control level, above 80%. For stages 2 and 3, however, a satisfactory control level was not observed.

The evaluation of dry mass at 60 DAA (Table 7) including the remaining stage 2 and 3 plants since, as a rule, the stage 1 plants were controlled by the herbicide applications (Figure 2). The results indicate a significant dry mass reduction for the stage 2 when compared to untreated, showing that all management tested were effective to reduce the dry mass at this stage; while for the stage 3, only the glyphosate + [halauxifen-methyl + diclosulam] at 1,440 g e.a. ha-1 +[6.32 + 31.87 g i.a. ha-1] showed a dry mass significantly lower than the untreated.

The results of this experiment show that the best period to control sumatran fleabane is at the early development stages. Other authors also have observed that the control levels are higher for younger plants (Vangessel et al., 2009Vangessel M.J. et al. Influence of glyphosate-resistant horseweed (Conyza canadensis) growth stage on response to glyphosate applications. Weed Technol. 2009;23:49-53.) than on more advanced development stage. According to Santos et al. (2014bSantos F.M. et al. Estádio de desenvolvimento e superfície foliar reduzem a eficiência de chlorimuron-ethyl e glyphosate em Conyza sumatrensis. Planta Daninha. 2014b;32:361-75.), the development stage influences the plant’s sensitivity to glyphosate and chlorimuron-ethyl herbicides due to the increase of trichome density and the decrease of the number of stomas. Another possible explanation for lower control of advanced stages in Conyza spp. is the lower rate of absorption due to a thicker cuticle, limited translocation and the plants enhanced ability to metabolize the herbicide (Koger and Reddy, 2005Koger C.H., Reddy K.N. Role of absorption and translocation in the mechanism of glyphosate resistance in horseweed (Conyza canadensis). Weed Sci. 2005;53:84-9.); according to Braz et al. (2017Braz G.B. et al. Sumatran Fleabane (Conyza sumatrensis) control in no-tillage soybean with diclosulam plus halauxifen-methyl. Weed Technol. 2017:31:184-92.), higher development stages demand higher herbicide rates. However, comparing the glyphosate + 2,4-D formulation rates, only the 1,440 + 1,209 g e.a. ha-1 rate allowed the control for stage 1; for the other stages, no glyphosate + 2,4-D rates showed acceptable control levels at 50 DAA.

The sumatran fleabane control was easier when carried out at early development stages. Regardless of the plants stage at the moment of application, the better control levels were obtained with associations containing glyphosate + [halauxifen-methyl + diclosulam] at 1,440 g e.a. ha-1+ [6.32 + 31.87 g i.a. ha-1], showing that the halauxifen-methyl combined with diclosulam is an option for this species management in the agricultural systems. 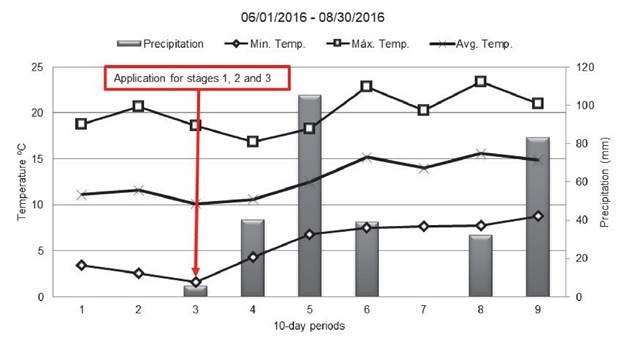 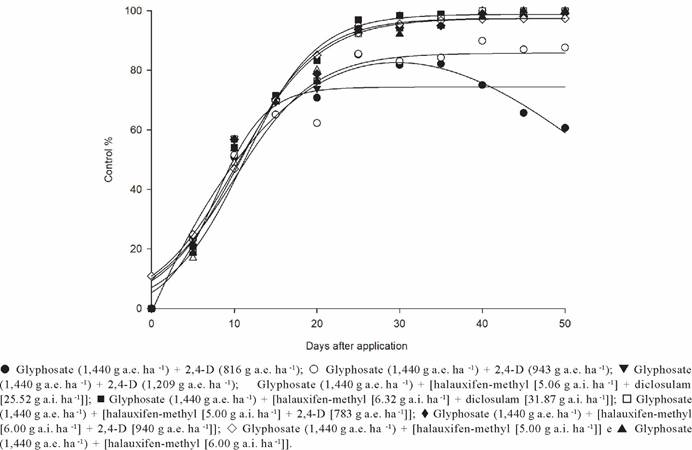 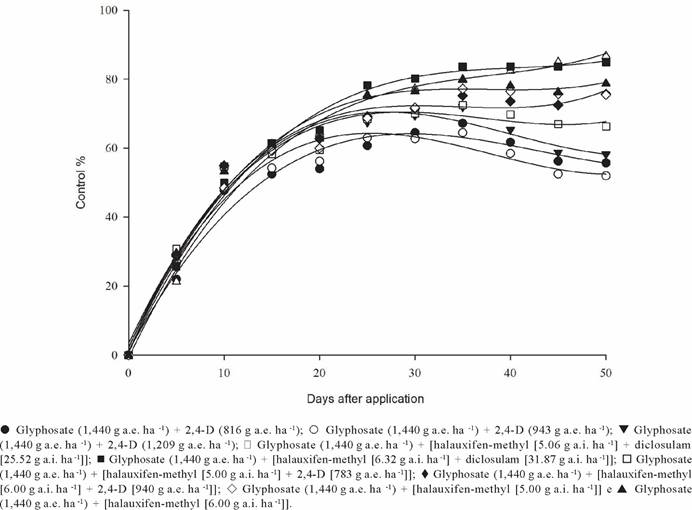 Table 2   p-values for ANOVA analysis of the treatments and stages evaluated in the sumatran fleabane control experiment, Toledo (PR), 2016