The bit value of working memory

The present study was based on the hypothesis that a limited amount of information can be simultaneously processed in working memory. The main objective was to determine the capacity of working memory under experiment conditions and express it in terms of bits of information. The bit values of the selected objects used in the experiment were determined using Shannon's formula. The objects were presented to the participants as a set of charts. Each chart presented a four-element object with a particular bit value. The elements constituted commonly known signs, with no difficulty in perception. The efficiency of object recollection from working memory decreased as the bit value of the object increased. In each of the experiments, the bit value of the recollected information oscillated between 26.7 and 31.9. The present results did not confirm sex differences in working memory function.

The bit value of working memory

The present study was based on the hypothesis that a limited amount of information can be simultaneously processed in working memory. The main objective was to determine the capacity of working memory under experiment conditions and express it in terms of bits of information. The bit values of the selected objects used in the experiment were determined using Shannon's formula. The objects were presented to the participants as a set of charts. Each chart presented a four-element object with a particular bit value. The elements constituted commonly known signs, with no difficulty in perception. The efficiency of object recollection from working memory decreased as the bit value of the object increased. In each of the experiments, the bit value of the recollected information oscillated between 26.7 and 31.9. The present results did not confirm sex differences in working memory function.

Working memory (WM) has been the object of extensive research. Many models of WM processing exist. The classic model proposed by Baddeley includes three cooperating subsystems in its latest version that are managed by the superior central executive system (Baddeley, A.D., & Hitch, G., 1974; Baddeley, 2003). A different approach was proposed by Cowan (2001), who considered WM to be an active part of long-term memory (LTM). He posited that one stimulus can activate various types of memory and can be coded in different ways. In Cowan's theory, memory trace can be located at different levels of activation, with attention as a key concept. The extension of the definition of WM to the periodically active part of LTM was proposed previously by other researchers (Anderson, 1983).

Every stimulus and piece of information, regardless of whether it comes from outside or is evoked from the sources of LTM, must be located in WM to be consciously processed. Its actual resources constitute our conscious "here and now" perception of present time.

The functional definitions of WM are quite consistent. It is most often understood as a system, or more precisely a set of systems, that is responsible for the temporary storage of information during cognitive tasks (Hulme, & Roodenrys, 1995). Such a complex definition of WM entails a summation of all processes described as short-term memory (STM). Contemporary research has experienced difficulty separating these components (Colom, Rebollo, Abad, & Shih, 2006). Individual differences in the capacity of WM can result from differences in memorization ability and the efficiency of interpreting the meanings of the presented objects. In the case of words, participants remember not the sequence of letters but rather the referent (Turner, & Engle, 1989). The problem of individual differences in the capacity of WM and their influence on experimental results can be eliminated by appropriately choosing numerous and representative objects (Shen, Kiger, Davies, Rasch, Simon, & Ones, 2011).

One of the basic features of WM that has been stressed by scholars is its limited capacity. Studies on capacity have focused on determining the number of elements that can simultaneously function in the WM buffer. However, the number of memorized elements is strongly influenced by various factors, including color, shape, and location (Luck, & Vogel, 1997; Zhang, & Luck, 2008).

The main way of determining the amount of information is to express it in bites. The capacity of WM can be described as the bit values of the objects it processes. The aforementioned complexity of the objects, understood as the number of features (e.g., color, location, and shape), increases their bit value, which in turn influences the number of objects located in WM. Single-color, simple-shape objects occupy a precise amount of space that can be measured and expressed in information units. Every additional feature of an object increases its bit value, making calculations of its value more difficult. Thus, precisely describing the number of objects recalled from WM is difficult. Five to seven objects are usually mentioned, although the number depends on the complexity of the objects (Zimmer, 2008).

Elements with a higher bit value are remembered less efficiently than those with a lower bit value. Research on the relationship between the efficiency of remembering and the length of words or the complexity of the visual message confirms this theory (Vallar, & Baddeley, 1984; Awh, Barton, & Vogel, 2007). However, the bit value of the objects processed by WM and the bit capacity of WM have not yet been determined experimentally. We assume that the differences in the efficiency of processing objects in WM can be described in terms of their bit values. This approach allows researchers to determine the bit capacity of WM under specific experimental conditions.

The present study was based on the hypothesis that a limited amount of information can be simultaneously processed in WM. The main objective was to determine the capacity of WM under experiment conditions and express it in bits. This procedure allowed us to determine the capacity of WM without examining the precision of recreating the remembered objects.

We recruited 270 participants (186 women and 84 men) for the study. Their ages ranged from 18 to 23 years. None of the participants had any sight defects or distortions. To avoid the impact of multiple repetitions (i.e., learning) on task difficulty, each participant participated in only one experiment.

In a single experiment, the subjects were presented with a set of 12 charts displayed one after the other for 3 s. The charts were separated by blank, black screens displayed for 1 s (Figure 1). The objects were presented on a 17" screen. The presentation of the objects was prepared using Microsoft PowerPoint 2003. The participant was seated 60 cm from the screen. The experiment was conducted in one room under comfortable conditions with a relatively small number of external visual and aural stimuli. Each participant was examined separately.

Each chart presented a four-element object with a particular bit value. To limit the influence of situational, emotional, social, and autobiographical contexts, figures with a very limited context were chosen as the elements. They constituted commonly known signs, the perception of which did not cause any difficulties.

After displaying all of the charts, the subjects were asked to recreate a graphic form of the objects they remembered on a sheet of paper. The time limit was 30 s for the task. The presentation time and time to recreate the figures were determined in pilot studies and chosen to optimize the subjects' performance.

We measured the number of objects that the subjects recalled after the objects were presented. The focal point of our research was not the ability to remember effectively but rather the capacity of WM. Thus, the number of objects correctly and incorrectly remembered was summed. As a result, we accounted for whole information that was placed in WM at the time.

No significant differences were found between sexes in the number of elements recalled or the bit values attached to them (Table 1.) Therefore, the male and female data were analyzed together. 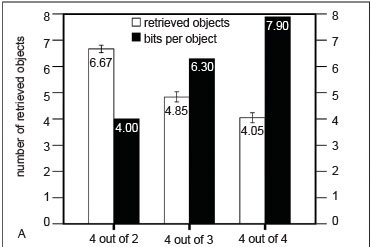 The connection between WM and other features of the human mind, such as the speed of information processing, general and particular cognitive skills, and other personality traits, has seen increased interest in the field (Baddeley, 2001; Conway, Kane, Bunting, Hambrick, Wilhelm, & Engle, 2005; Zimmer, 2008). Consciously processed information at a particular time constitutes our mental consciousness of the here and now. Its content can derive from external sources (i.e., information received through senses; Lee, & Chun, 2001; Woodman, Vecera, & Luck, 2003; Chen, Eng, & Jiang, 2006) and internal sources (i.e., retrieved resources from LTM; Fuster, 1998; van der Linden, 1998; Song, & Jiang, 2005). To avoid memorization of the meanings and the influence of emotions on the WM process, which would not allow the precise measurement of WM capacity, we chose sequences of objects that are not related in any meaningful way. However, such a problem is difficult to avoid in the case of words with different lengths that may have individual emotional and associative undertones. In our opinion, this may be one of the reasons for the significant differences observed among participants (Daneman, & Carpenter, 1980).

Studies have indicated that between five and seven objects can be simultaneously processed in WM, whereas two to four mental memory operations can be simultaneously conducted. Because of the wide variety of objects used in past studies, comparing the results is difficult. This problem is often addressed in synthetic studies (Zimmer, 2008).

The purpose of the present study was to create experiment conditions that can be used to estimate the number of objects that can be simultaneously processed in WM and determine their bit value. Regardless of whether the objects were memorized correctly or not, they were assigned a bit value that occupied WM during their recreation. The present results allowed us to determine that approximately 30 bits of information can be processed by WM. Such an approach is rare in studies of memory (Lehrl, & Fischer, 1988).

One exception was the experiment in which the bit value of a single object was the lowest. In this case, the measured bit capacity of WM was lower than the value obtained in the other experiments. A similar effect was observed by others researchers. Experimental conditions that had lower WM requirements for a single operation resulted in a decrease in general processing skills (Oberauer, & Kliegl, 2006).

This effect may have two possible explanations. The first is the considerable influence of motivation on WM function (Brooks, & Stell, 2006; Szatkowska, Bogorodzki, Wolak, Marchewka, & Szeszkowski, 2008). A simple task limits the importance of this parameter, which can impact the results. The second explanation refers to classic statements about the necessity of dividing the resources of WM into passively stored information and information-processing algorithms (Shiffrin, 1970). In the case of the simplest objects, which in our studies belonged to two elemental categories, using a simple algorithm during processing was possible, which allowed the ordering of the sequence. Such facilitation could seemingly favor better results. However, the necessity of creating and using the algorithm, according to which the recollection of the information occurred, engaged some parts of WM and blocked WM resources, which may have negatively impacted the final effect (Figure 3C). The observed effects may have resulted from a combination of the two aforementioned explanations, but this will require further research.

The strength of the statistical relationships showed that WM capacity expressed in bits did not depend on the complexity of the objects. In contrast, if WM capacity was expressed as the number of retrieved objects, then 28.9% of the variability could be explained by the complexity of the objects. This may indicate the need to include the bit values of experimental objects in WM studies.

In contrast to numerous reports (Duff, & Hampton, 2001; Kauffman, 2007), the present study did not confirm sex differences in the function of WM. Determining the bit capacity of WM may be useful for designing warning signs and systems, planning didactic processes, and optimizing the information flow between people. 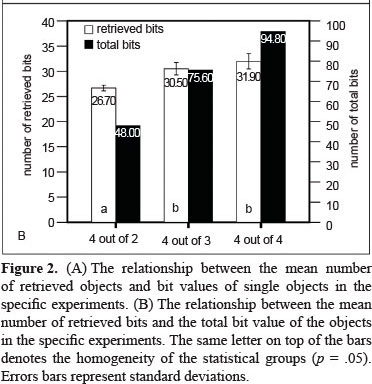 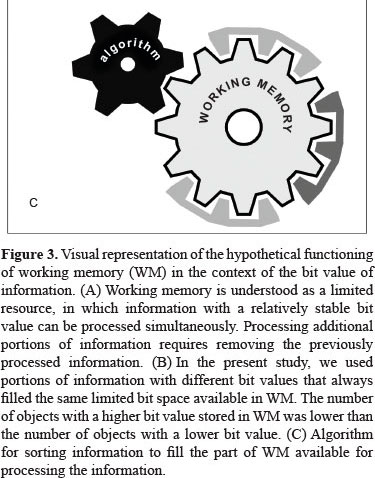