Development of membrane and freestanding film as of polyaniline: synthesis, characterization and application

Conducting polymers are a new class of polymers that has received particular interest for the production of membranes and films. The polyaniline (PANI) is distinguished among conducting polymers for its high chemical stability, easy polymerization and low cost. The objective of this work is to develop a freestanding polyaniline film, using camphor-10-sulphonic acid (CSA) as a primary dopant and 4-chloro-3-methyl phenol (CMC) as a secondary dopant in the presence of solvent for mixture of the solution, as well as develop a membrane using a conventional polymer (high impact polystyrene-HIPS) and conducting polymer (Polyaniline-PANI) doped with CSA for use in electrodialysis. Were performed tests of electrodialysis to determine the transport of ions Ni+2. The membrane and film were characterized by electric conductivity SEM, FTIR and Raman spectroscopy and TGA. The results point to the possibility of application of the selective membrane for electrodialysis. The extraction of nickel for the synthesized membrane was similar to the commercial membrane. The freestanding film despite exhibiting good mechanical strength in solid state showed unsatisfactory when placed under water with the working solution to electrodialysis, due to its brittle state. 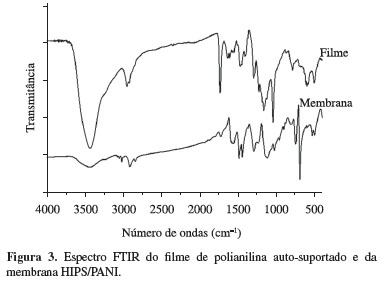