This manuscript describes the development of a sensitive and selective disposable potentiometric sensor based on doped polypyrrole films (PPy) for fluoride ions determination. The fluoride ions were incorporated in the PPy matrix during electrochemical polymerization under galvanostatic conditions on a composite electrode of ethylene vinyl acetate and black carbon. Experimental parameters involved in PPy film preparation, such as electric current densities, electric charge, pH and electrolyte concentration, were optimized in order to maximize the potentiometric response. The sensor response for fluoride ions was linear in the concentration range of 1.00 × 10- 5 to 1.08 × 10- 2 mol L- 1, with a slope of ~40 mV/pF, and it was sufficiently stable for several determinations. The method was successfully applied in the determination of fluoride ions in pharmaceutical commercial samples. Results demonstrated that the proposed sensor can be used as an interesting alternative to traditional analytical methods for fluoride ions. 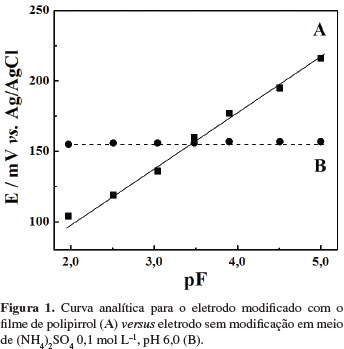 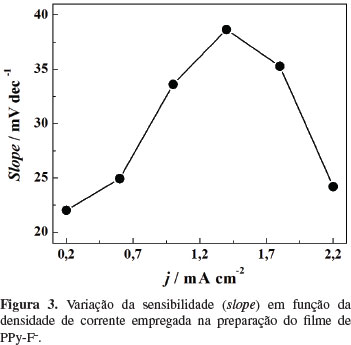