The search for an alternative to synthetic drugs have revealed discoveries in the field of pharmacology and, according to melittin and apamin, two components of bee venom which have been described were with various pharmacological actions.This study aimed to evaluate the in vitro antiviral and virucidal capabilities of these components. Therefore, after verification of their toxic doses by MTT (3-(4,5-dimethylthiazol-2-yl)-2,5-diphenyltetrazolium bromide) assay, MDBK cells (Madin Darby Bovine Kidney) have been cultivated in microplates and treated with different concentrations of apamin, melittin and its association. This treatment occurred before and after infection with MOI (multiplicity of infection) 0.1 of cytopathogenic strains of bovine herpesvirus type 1 (BoHV-1) strain Los Angeles and bovine viral diarrhea virus (BVDV) strain NADL. After incubation for 72 hours, 37°C, the cells were submitted to MTT assay to estimate cell viability. In parallel experiments, plates were subjected to the same procedure suffered freezing and thawing cycle the cells to rupture the same and measurement of viral titers. The virucidal assay was performed by incubating suspension of bovine herpesvirus type-1 and BVDV with apamin solutions, melittin and association for 24 hours at 37°C and 22°C. The viral titer was evaluated at 0 hours, 1, 2, 4, 8 and 24 hours of incubation. The cytotoxic concentration to 50% of the cells (CC50) of melittin was 2.32g/mL and apamin did not show toxicity at the greater concentration tested (100μg/mL). There was antiviral effect of melittin on bovine herpesvirus type-1, especially at a concentration of 2μg/mL, where was observed 85.96% cell viability when treatment was performed before the infection and 86.78% viability when the treatment was carried out after infection. There was also a 90% reduction of viral particles of bovine herpesvirus type-1. In lower concentrations (1 and 1.5μg/mL) melittin no antiviral activity because cell viability was low, showing cytopathic effect of the virus. At the association two substances there were a decrease in the title of BVDV and there was higher cell viability when compared to the isolated action of the compounds of this virus. This is confirmed in the virucidal activity, since there was a decrease of 90% of the viral particles of BVDV with the combination of the two compounds of bee venom. Acting individually, melittin showed antiviral effect and virucidal against for BoHV-1, zeroing its title in just 2 hours at 37°C. It is concluded that melittin has antiviral and virucidal action against the BoHV-1 and its association with apamin potentiate its effects against BVDV. 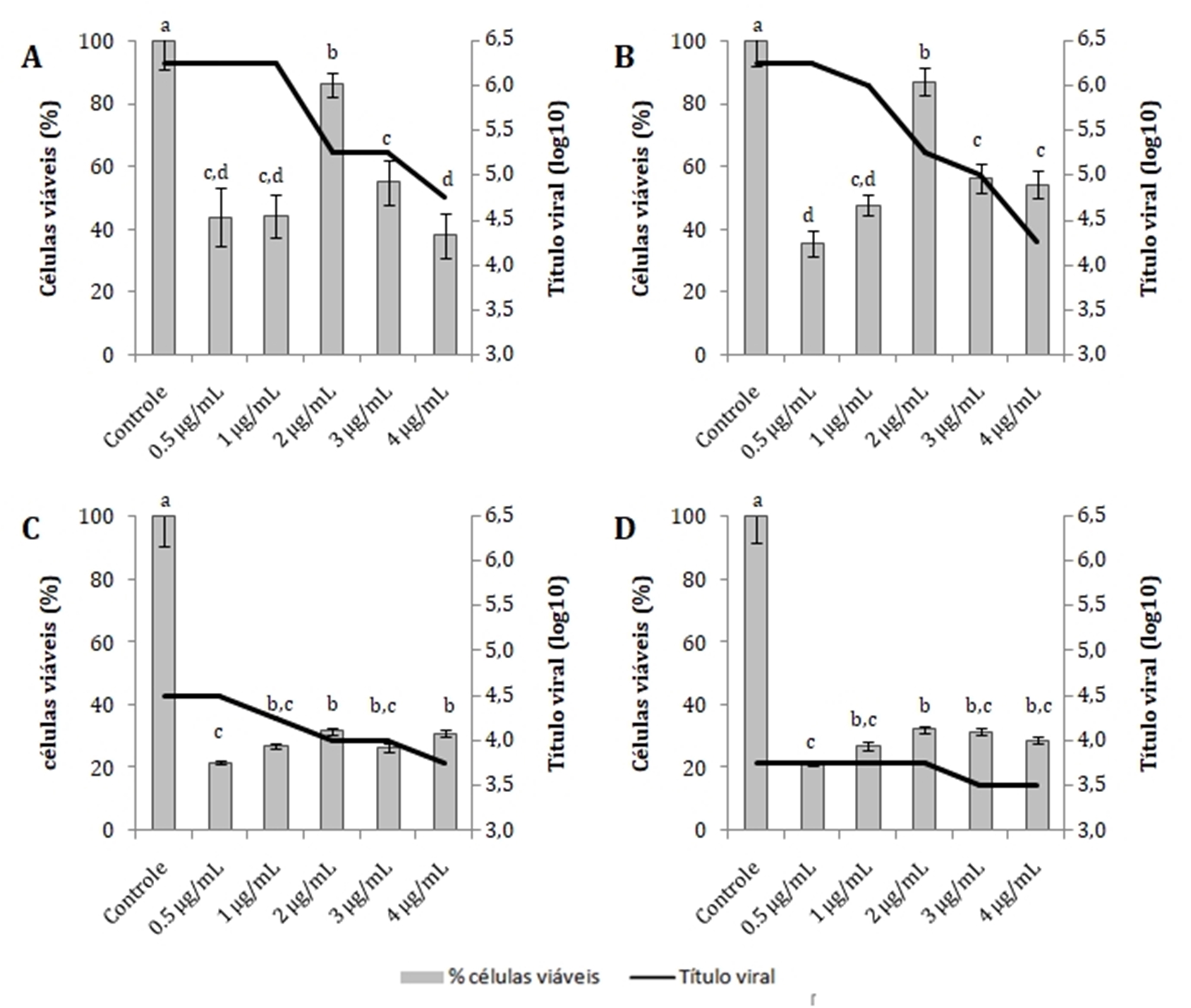