The development of noninvasive techniques for obtaining semen from deer facilitates the creation of genome banks, which are important tools for ex situ and in situ conservation. This study aimed to establish a noninvasive method of semen collection and compare two techniques of collection in four species of the genus Mazama: M. americana, M. gouazoubira, M. nana and M. nemorivaga. To achieve this, 6 males (M) and 2 females (F) of the species M. Americana, 3M and 2F of M. gouazoubira, 1M and 1F of M. nana and 2M and 1F of M. nemorivaga were used. For each technique tested, a period of habituation to animal handling was conducted; then, the two conditioning techniques and collection were evaluated. In the first, a female in estrus was used with lateral deviation of the penis to an artificial vagina (FEDL), yielding collection from 50% of the males (100% from M. gouazoubira and 50% from M. americana), with no ejaculate from the remaining species. In the second technique, using a taxidermized dummy with urine from females in estrus (MUFE), no semen collection was possible. During all stages, male behavior was observed regarding the time of interest and approximation, the "Flehmen" response, the act of sniffing or licking, exposure of the penis, erection, number of false mounts, attempts at copulation and the occurrence of aggression between the deer. 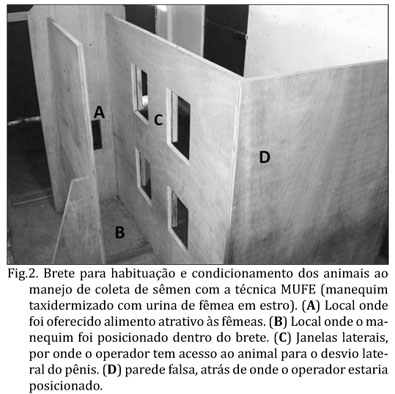