Conventional PCR (PCRTeq) for diagnosing Theileria equi and multiplex PCR (M/PCRTeq-Bc) for diagnosing T. equi and Babesia caballi were comparatively evaluated with nested PCR (N/PCR-Teq) for diagnosing equine piroplasmosis. In DNA sensitivity determinations, in multiple dilutions of equine blood that had tested positive for T. equi, PCR-Teq and N/PCR-Teq detected hemoparasite DNA in the larger dilutions (1:128), but did not differ significantly from the M/PCRTeq-Bc (1:64). In analyses on equine serum tested by ELISA, there was high agreement between this serological test and PCR-Teq (k = 0.780) and moderate agreement with N/PCR-Teq (k = 0.562) and M/PCRTeq-Bc (k = 0.488). PCR-Teq found a higher frequency of T. equi both in extensively and intensively reared horses, but this was not significant in relation to N/PCR-Teq (P>0.05), and both PCRs indicated that there was an endemic situation regarding T. equi in the population of horses of this sample. PCR-Teq was only significantly different from M/PCR-Teq-Bc (P<0.05). PCR-Teq presented high sensitivity and specificity, comparable to N/PCR-Teq, but with the advantage of higher speed in obtaining results and lower costs and risks of laboratory contamination. This accredits PCR-Teq for epidemiological studies and for determinations on affected horses. 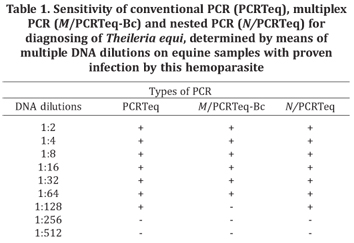