The study aimed to compare the effects of intraosseous infusion of lactated Ringer's and 0.9% sodium chloride solutions on the electrolytes and acid-base balance in pigeons submitted to humerus osteosynthesis. Eighteen pigeons were undergoing to isoflurane anesthesia by an avalvular circuit system. They were randomly assigned into two groups (n=9) receiving lactated Ringer's solution (LR) or 0.9% sodium chloride (SC), in a continuous infusion rate of 20mL/kg/h, by using an intraosseous catheter into the tibiotarsus during 60-minute anesthetic procedure. Heart rate (HR), and respiratory rate (RR) were measured every 10 min. Venous blood samples were collected at 0, 30 and 60 minutes to analyze blood pH, PvCO2, HCO3 -, Na+ and K+. Blood gases and electrolytes showed respiratory acidosis in both groups during induction, under physical restraint. This acidosis was evidenced by a decrease of pH since 0 min, associated with a compensatory response, observed by increasing of HCO3 - concentration, at 30 and 60 min. It was not observed any changes on Na+ and K+ serum concentrations. According to the results, there is no reason for choosing one of the two solutions, and it could be concluded that both fluid therapy solutions do not promote any impact on acid-base balance and electrolyte concentrations in pigeons submitted to humerus osteosynthesis.

The choice of the fluid therapy depends on the clinical and biochemical conditions of the patient. Those might be especially described by serum total protein and its fractions, hematocrit and electrolytes (Na+, K+ and Cl-), associated with the degree of the dehydration and blood loss during the surgery (Montesinos & Ardiaca 2013Montesinos A. & Ardiaca M. 2013. Acid-base status in the avian patient using a portable point-of-care analyzer. Vet. Clin. Exot. Anim. 16:47-69.). Bird's blood serum usually has higher concentrations of Na+ and low concentrations of K+ than mammals (Gunkel & Lafortune 2005Gunkel C. & Lafortune M. 2005. Curent techniques in avian anesthesia. Sem. Avian Exot. Pet Med. 14:263-276.). Administration of isotonic solutions formulated to use in mammals may affect the dynamic of body fluids, physiologic processes and heart contractility in birds. Thereby, it is important to establish which is the best fluid and the adequate volume to be administered in those patients.

This study aims to evaluate the impact of fluid therapy with lactate Ringer's solution or 0.9% saline solution, by intraosseous route, in pigeons (Columba livia) submitted to osteosynthesis of the humerus.,

This study was approved by the Institutional Animal Use and Care Committee (number 38/2008) of Federal University of Santa Maria. Eighteen adults pigeons (Columba livia), weighting 302.5±28.8g were used. Those birds were submitted to osteosynthesis of humerus with bone graft (parallel study).

The birds were manually restrained and submitted to inhalant anesthesia induction, by isoflurane (Isoflurane(r). Cristália Prod. Farm. Ltda. Itapira. SP. Brazil) in 100% oxygen by use of a face mask (Figure 1a). After anesthetic induction, the birds were intubated with 2.0 uncuffed endotracheal tube (Figure 1b) (0 min) and maintained an expired fraction of isoflurane concentration (FE'Iso) of 3.0 ± 0.4% with a Bain circuit (Oxigel(r) São Paulo. SP. Brazil). The birds were placed on lateral recumbency on a thermal pad (Ortovet(r). São Paulo. SP. Brazil) to maintain body core temperature (39-41°C). A 20 G catheter was introduced into the proximal region of the tibiotarsus to fluid therapy administration (Fig.1c and 1d). 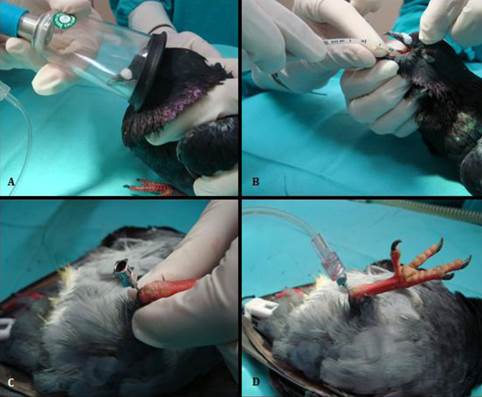 Fig.1:
(A)Isoflurane anesthetic induction of pigeon by face mask. (B) Tracheal intubation with a 2.0 no cuffed tube. (C) Insertion of a 20G catheter into the tibiotarsus bone. (D) Fluid therapy administration.

In relation to the blood gas and electrolytes analysis, both groups showed an increase in HCO3 - values. This increase may be due to a rise in PvCO2, even though no statistical difference was observed when compared values with 0min (Table 1). Regarding to the impact of the fluid therapy on the electrolytes concentrations, no difference was observed on Na+ or K+ blood concentrations. (Table 1). No osteomyelitis was found in any pigeon during the 15-day postoperative period (parallel study), based on clinical status.

Acidemia (decrease of blood pH) was observed in both groups, since 0 min, when compared to reference values (Powell 2000Powell F.L. 2000. Respiration, p.233-264. In: G.C. Whittow (Ed.), Sturkie's Avian Physiology. 5th ed. Academic Press Elsevier, Melbourne.). However, this pattern was not changed in both groups over time.

The results of Na+ and K+ concentrations, along with other parameters, such as PvCO2, pH, HCO3 - and perioperative monitoring, showed a similar pattern between LR and SC, that cannot justify any preference for the use of each one fluid therapy solution. Despite limited data on the effect of different fluid therapy solution on birds, West et al. (2013)West E., Pettitt R., Jones R.S., Cripps P.J. & Mosing M. 2013. Acid-base and electrolyte balance following administration of three crystalloid solutions in dogs undergoing elective orthopedic surgery. Vet. Anaesth. Analg. 40:482-493. described a similar study performed in dogs. They compared the infusion of 0.9% saline solution, Hartmann's solution (which composition is similar to lactated Ringer's solution) or a polyconic glucose-free maintenance solution (Normofundin OP, B. Braun Medical Ltd, UK) for 2 hours, at a 10mL/kg/h rate, and they concluded the very few differences among perioperative administration of the solutions, and the differences observed cannot be attributed to SC as responsible promoter of a potential metabolic acidosis. On the other hand, Scheingraber et al. (1999)Scheingraber S., Rehm M., Sehmisch C. & Finsterer U. 1999. Rapid saline infusion produces hyperchloremic acidosis in patients undergoing gynecologic surgery. Anesthesiology 90(5):1265-1270. compared 0.9% sodium chloride e lactated Ringer's solution infusions in human, and observed significative changes in blood pH, as SC group showed a decrease in pH from 7.4 to near 7.2 after 120 minutes at a 30ml/kg/h infusion rate. The authors attributed this decrease in pH to an increase in serum chloride as a hyperchloremic metabolic acidosis.

Despite the importance and applicability in providing fluid therapy in birds, data about fluid therapy in different species of bird is relatively poor. Polytraumatized bird care consists in a relevant part of the total treatments done in wild life care centers, where crystalloid solutions are the main choice to expand/maintain patients' volemia. The results shown here support that the fluid solution do not influence the bird's acid-base or electrolyte balances when used at a 20mL/kg/h infusion rate for 60 minutes. Hence, this study provided considerable data in fluid therapy in birds.

According to the results of the present study, 0.9% saline solution or lactated Ringer's solution at a 20mL/kg/h rate infusion, by intraosseous route, do not cause significant changes on acid-base balance and electrolyte concentrations in pigeons.

This is an open-access article distributed under the terms of the Creative Commons Attribution License, which permits unrestricted use, distribution, and reproduction in any medium, provided the original work is properly cited.

Fig.1:   (A)Isoflurane anesthetic induction of pigeon by face mask. (B) Tracheal intubation with a 2.0 no cuffed tube. (C) Insertion of a 20G catheter into the tibiotarsus bone. (D) Fluid therapy administration.