Research into the relationship between work and career involves two constructs - commitment and entrenchment, whose influence on performance have yet to be fully understood. The main goal of this study is to analyze the influences of the dimensions of links with the academic career of teaching in the contexts of public and private higher education in Brazil. This research is extensive in nature and cross-sectional. For data collection, a questionnaire which had previously been validated for the Brazilian context was applied containing a set of scales to measure career commitment and entrenchment. The links with the careers were measured by the scales proposed and validated by Carson and Bedeian (1994) and Carson, Carson and Bedeian (1995), while the performance of teachers includes points taken from their Curriculum Vitae of the Lattes Database, in accordance with the practice used by Oliveira (1998). We surveyed 635 teachers, whose data were submitted to descriptive analysis, factor analysis and structural equation modeling. The best fit model reveals that the more time and money teachers invest in their careers, the greater their academic performance will be. We also found differences in the influences of the two links to career in academic performance between private and public higher education establishments. 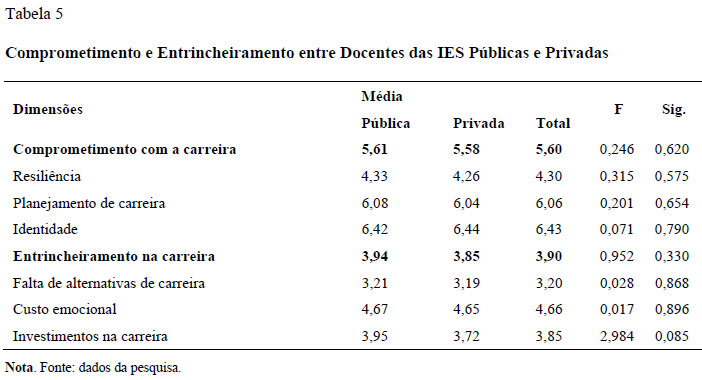