Morphology studies assume significant importance in analysis of phenomena of granular systems packaging, in particular with a view to the use of the technique of soil stabilization named particle size correction in forest roads. In this context, this study aimed to develop and operationalize a Sand Grain Image Capture System and, hereby, determine the morphological indices of the sand fractions of two sandy soils called João Pinheiro (JP) and Cachoeira da Prata (CP). Soil samples, air-dried, were sieved (2.0 mm nominal mesh size) for removal of gravels. The materials that passed through the sieve were subjected to dispersion, washing in 0.053 mm nominal mesh size sieve, removal of organic matter and iron oxides to obtain the clean sand fractions. Subsequently, each soil sample was sieved for separation into twelve classes, between the diameters of 0.149 mm and 1.190 mm, using a Rotap shaker. Next, tests were carried out to characterize the morphometric attributes of the twelve classes of sand fractions of the soils studied. For validation of the performance of the Sand Grain Image Capture System, the results were compared to those obtained using a standard procedure for image analysis. The analysis of the results led to the following conclusions: (i) the sand fraction of the JP soil presented higher values for the morphometric indices roundness, elongation and compactness compared to sand fraction of the CP soil; and (ii) the Sand Grain Image Capture System worked properly, with practicality.

The network of Brazilian forest roads consists mainly of dirt roads, which present significant technical challenges in the design, construction and maintenance phases in order to remain in adequate conditions of transit throughout the year. In these roads, the soil is the building material par excellence, and the mechanical strength of the subgrade, in the case of design, and the prime coat, in situations of design and maintenance of roads, is of fundamental importance to ensure good performance along its useful life.

However, these roads do not always have soils with adequate mechanical strength for the construction or improvement of road pavement at economically viable transportation distances. This indicates the importance of using techniques for stabilization of local soils, especially the particle size correction that includes adding and or rearranging soil particles so as to produce alternative solutions for use in forest roads. This is the context of the present study.

Under the geotechnical point of view and in granular soils, Das (2007)DAS, B. M. Fundamentos de Engenharia Geotécnica. São Paulo: Thomson Learning, 2007. 560p. describes morphology as a consideration of similar importance to the particle size distribution, as it has significant influence on properties, such as the maximum and minimum void ratio, shear strength, permeability and compressibility. Moreover, the shape of the sand grains can be an important indicator of their origin; for example, sand particles located close to the origin, in general, are more angled, while those transported for long distances by wind and water tend to be rounded to subangular.

Structurally, Pinto (2006)PINTO, C.S. Curso básico de mecânica dos solos em 16 aulas. 3ª. ed. São Paulo: Oficina de Textos, 2006. 367p. considers that the grain shape is important in geotechnical behavior of granular soils, as it influences the mechanical behavior of these materials, because it determines how particles fit together, mingle and slide on each other when requested by external forces. However, the author stresses that despite the importance of the grain shape, in Geotechnics, little attention has been given to this aspect in the classification of sand, mainly because of the lack of simple numerical indices to express the shape of grains.

The shape of grain particles is usually described by factors of shape, ranging between 0 and 1, in which the unit is a sphere. These factors can be obtained, in many cases, in an image captured with the aid of a microscope, digital camera, or a combination of both, or even by other means.

Soil samples, air-dried, were sieved (2.0 mm nominal mesh size) for removal of gravels. The sieved material was pre-treated as follows: (i) sample dispersion - using a mechanical disperser for 16 h, at 50 rpm, and by chemical dispersion, using NaOH at 0.5 mol/L and deionized water; at the end of the process, the samples were washed on a sieve (0.053 mm nominal mesh size) to separate the sand fraction from silt and clay; (ii) removal of organic matter - using NaClO pH 9.5 in a water bath at 70ºC for 6 h and, in sequence, washing the sample in running water; and (iii) removal of iron oxides - using dithionite-citrate solution in water bath for 1 h, in three sequential extractions.

The separation of the different sand particle sizes was performed with certified sieves and a Rotap shaker, of controlled speed and rotary movements. Twelve classes of diameters between 0.149 and 1.190 mm were analyzed in the study.

2.2.3. Morphometric characterization of the sand fraction

The equipment associated with a computer allows the view of the object on the glass plate of a mechanical table, positioning the camera properly and monitoring the number of photos, with the camera still or on the move. Proper positioning of the camera to take pictures of the sand grains or other object on the glass plate of the mechanical table depends on the correct position of the optical part and mechanical table. The optical part of the equipment can move in the X direction, whereas the mechanical table, in the Y direction. This movement is carried out automatically by means of motorized devices (controlled by engines) coupled in X and Y gears and controlled by specific hardware and software (included in the equipment). The use of software allows to adjusting the frequency of the drive and the speed of engines.

The clean sand soil fractions CP and JP were photographed using a MDCE 5A digital camera with 1.3 Megapixels resolution (1280 x 1024 dpi) coupled to the optical microscope of the Sand Grain Image Capture System.

For image processing, it was used the Adobe® Photoshop® CS software, to convert all image pixel values to black and white values. It was then removed the particles which had contact with other particles and which had been cut, being located at the image edges. The images were calibrated with the aid of a micrometer bar and the ImageJ software.

With processed and calibrated images, it was used the software QUANTIPORO (FERNANDES FILHO; VIANA, 2001FERNANDES FILHO, E.I.; VIANA, J.H.M. QUANTIPORO: um novo programa para tratamento e quantificação de imagens digitais para aplicações em ciência do solo. In: Congresso Brasileiro de Ciência do Solo, 28., 2001, Londrina. Resumos... Londrina: Sociedade Brasileira de Ciência do Solo, 2001. p.224.) to generate the following morphometric attributes: area, perimeter, roundness, major axis and minor axis. The value of the roundness index ranges from 0 to 1, and the closer the value to 1, the rounder the object is. Therefore, if the value is 1, the object is a perfect circle.

The attributes elongation and compactness were calculated with the aid of spreadsheet processor in Microsoft Office Excel 2007. The elongation index ranges between 0 and 1, the farther from 1 is the value, the more elongated the object is. This parameter is estimated by Equation (1).

Regarding the compactness index, the result lies between 0 and 1, and the farther from 1 the value is, the less circular the object is. This parameter was obtained by Equation (2).

The performance evaluation of the Sand Grain Image Capture System was carried out comparing the morphometric attributes obtained with this system with those determined for these soils by Dalla Riva (2010), using a traditional system of image analysis based on a digital camera Nikon Coolpix 4500 with CCD of 4.0 Megapixels coupled to an Olympus microscope CH30.

Figures 2A and 2B illustrate, respectively, the clean sand fractions of CP and JP soils, with both images obtained by the Sand Grain Image Capture System. 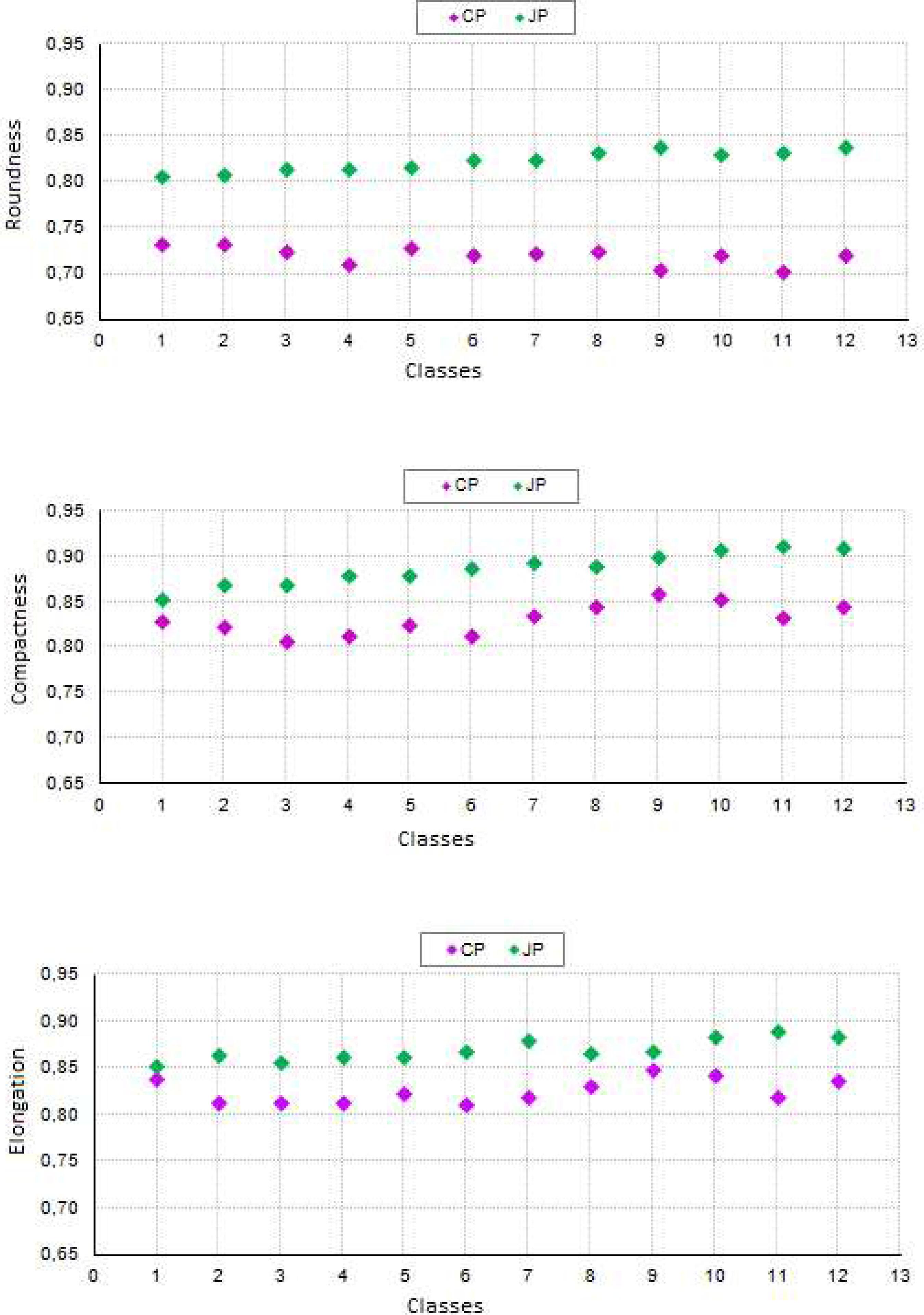 In Figure 3, it can be seen the morphometric index roundness, which expresses the degree of sharpness or curvature of the corners and edges of a particle. As expected from the visual observation of the images of sand grains in Figure 2, the clean sand fraction of the JP soil has a roundness index in the range 0.81-0.84, therefore, greater than that of the CP soil, which is between 0.70 and 0.73, evidencing the relatively low roughness of the first.

In this research, it was observed that the interference of the resolution was more evident in rough particles, with size smaller than 0.125 mm. Because it were used classes above this size, this influence was relatively small. It should be stressed that, if higher resolution images (e.g. above 1.3 megapixels) are required, it is possible to replace the microscope camera in the Sand Grain Image Capture System developed in this work.

Due to the small difference between the results of morphometric indices roundness, elongation and compactness obtained by Dalla Riva (2010)DALLA RIVA, R.D. Efeito das Propriedades Físicas dos grãos e Agente de Cimentação na estruturação da Fração Areia de Solos Arenosos. 2010. 157f. Tese (Doutorado em Engenharia Civil) - Universidade Federal de Viçosa, Viçosa, MG, 2010. and those determined herein, shown in Figure 4, it is claimed that the Sand Grain Image Capture System worked adequately, allowing the morphometric characterization of the sand clean fraction of CP and JP soils with considerable practicality. As limitations of the image capture system developed, it is emphasized that images obtained of grain sizes smaller than 0.125 mm were blurred even by changing the microscope objective and making the necessary adjustments; on the other hand, the particles with sizes larger than 1.119 mm resulted in images larger than the screen, remaining only part of the image in the system.

The authors express their gratitude to CAPES, for the scholarship to the first author and CNPq and FAPEMIG for scientific initiation scholarships and financial support needed for this research, respectively, through the grants CNPq 304171/2010-7 and TEC PPM 00081-10.

Figure 3   Morphometric indices roundness, compactness and elongation of CP and JP soils based on size classes.

Figure 3   Morphometric indices roundness, compactness and elongation of CP and JP soils based on size classes.

Table 1   Classes used for the determination of the morphometric indices roundness, compactness and elongation of soils CP and JP.