FLAVIO A.M. SANTOS About the author

Allometry, growth and leaf demography of two Cecropia species, one with ant mutualist (C. glazioui) and another without it (C. hololeuca), were studied in an Atlantic Rain Forest area in the State of Rio de Janeiro, SE Brazil. Stem diameter was allometrically related to height in both species. Cecropia glazioui showed higher annual growth rates and longer internodes than C. hololeuca. Leaf phenology showed a seasonal pattern in both species, but the number of leaves on each plant was more variable along the year in C. hololeuca than in C. glazioui. Survivorship curves for leaves were intermediate between Deevey's Type I and Type II curves, with young leaves of C. glazioui showing a greater survival rate and life expectancy than those of C. hololeuca. Low variability in leaf production throughout the year and high survival rate for young leaves of C. glazioui may be characteristics related to its association with ants. 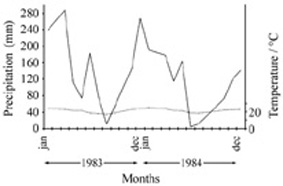 Figure 3.   Box-plot of growth characteristics for individuals of Cecropia glazioui and C. hololeuca in Piraí, RJ. A. growth rates (m.yr-1); B. number of internodes produced per year; C. mean internode size (cm); D. log10 variance of internode size. In a box-plot graph, the box comprises 50% of data. Boxes are notched (narrowed) at the median and return to full width at the lower and upper 95% confidence interval values. Inner and outer fences are defined by interquartile ranges. Asterisks are outside values and far outside values are circles. If the confidence intervals do not overlap, the median of the species are different (McGill et al. 1978).

Figure 4.   Box-plot of growth characteristics for individuals of Cecropia glazioui (A, C, E) and Cecropia hololeuca (B, D, F) in Piraí, RJ, for each sampled period. A-B. growth in cm.day-1; C-D. growth in internodes.day-1; E-F. internode length (mm). Box-plot legend as in figure 3.

Figure 5.   Box-plots of leaf dynamics characteristics for individuals of Cecropia glazioui and C. hololeuca in Piraí, RJ. A. rates of leaf emergence (bl); B. rates of leaf death (dl); C. net change in the number of leaves (rl). Box-plot legends as in figure 3. 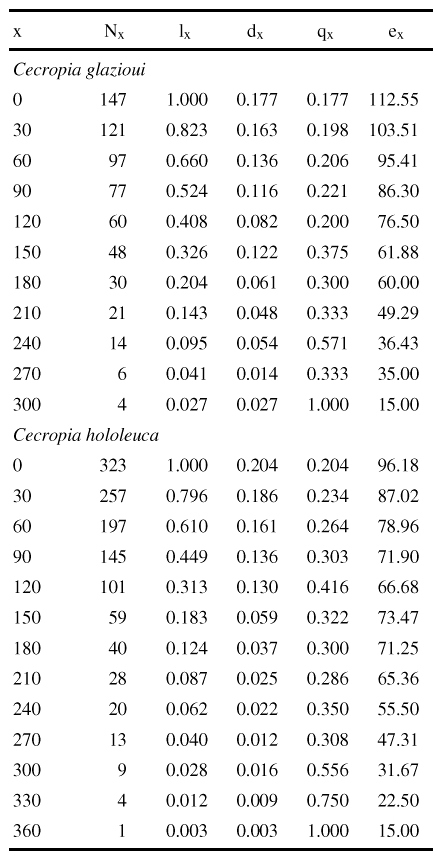