The inclusion of coffee in commercial layer diets

The inclusion of coffee in commercial layer diets

Coffee is drunk all over the world and it is known for its stimulating effect. This effect is produced by caffeine, a fat-soluble substance belonging to the group of drugs classified as methylxanthines (1,3,7-trimethylxanthine) that affect the central nervous system. In humans, caffeine is well absorbed by the gastrointestinal route and its peak blood concentration is obtained 15 to 45 minutes after its ingestion.

The consumption of low doses of caffeine (2mg/kg body weight) increases wakefulness, reduces drowsiness and fatigue, increases respiration and heart rates, and stimulated metabolism and diuresis (Braga & Alves, 2000). According to Felipe et al. (2005), caffeine consumption is considered excessive when daily ingestion is higher than 600mg for a person weighing 70kg, that is, 8.57 mg/kg body weight. Moderate doses range between those two values. Under experimental conditions, moderate doses of caffeine promote optimal physical and intellectual production, increase the individual's capacity to concentrate, and reduces the time of reaction to sensorial stimuli (Rall, 1987).

It would be expected that, when coffee is included in the feed, birds would be stimulated, seeking the feeders more actively, and consequently, increased their feed intake. Moreover, due to the diuretic effect of caffeine (Rang et al., 2001), higher water consumption, which is directly associated with feed intake (Skinner-Noble & Teeter, 2004), would also be expected. Commercial layers are genetically selected to have low feed intake. When associated with heat stress, layer feed intake may reach such low levels that their performance is impaired (Leeson et al., 2000), and therefore, the dietary inclusion of coffee could be beneficial. However, no studies in scientific literature on the feeding of coffee to commercial layers were found.

This study aimed at evaluating the possible stimulating effect of the dietary inclusion of caffeinated or decaffeinated coffee on the performance and internal and external egg quality of commercial layers.

Hens were distributed according to a completely randomized experimental design with three treatments (control, 1.2% caffeinated coffee, or 1.2% decaffeinated coffee) of five replicates of eight birds each. The control treatment consisted of a diet based on corn, a commercial concentrate, and ground rice hulls were used as inert material. A toasted and ground soluble commercial coffee brand was used for the caffeinated and decaffeinated coffee treatments. Both coffee types were included at 1.2 of the feed at the expense of inert material. The experimental diets contained equal energy and nutritional levels (Table 1). A coffee dose of 6mg/kg body weight, considered moderate for humans, 7.59mg/g average caffeine content in Brazilian coffee brands (Camargo & Toledo, 1998), 100g/hen/day average feed intake (Guia de Manejo Hy-Line Brown, 2009-2011), and 1.5kg average body weight were the factors used to calculate the amount of caffeinated coffee to be included in the diet. Therefore, a 1.5kg layer should consume 9mg caffeine daily. This requires the inclusion of approximately 1.2g of coffee in the diet. Considering 100g daily feed intake, dietary coffee inclusion rate was calculated as 1.2%. The treatment with decaffeinated coffee was used as another control, that is, coffee was fed to the hens, but it did not contain caffeine. Feed and water were offered ad libitum.

The following performance parameters were evaluated during the period of 25 to 31 weeks: feed intake (g/hen/day), egg production (%/hen/day), egg weight (g), egg mass (g/hen/day), and feed conversion ratio (g/g). Feed intake was calculated as the difference between the feed quantity offered in the beginning of the experimental period and the feed residue at the end of that period. Egg production was obtained by daily recording the number of eggs laid and expressing the results as a percentage relative to the number of hens housed. Egg weight was determined at the end of the experimental period by weighing all eggs produced and calculating the average. Egg mass was calculated by multiplying egg production by egg weight. Feed conversion ratio was determined as the ratio between feed intake and egg mass.

The internal egg quality parameters Haugh units and yolk and albumen percentages were determined in all eggs of each replicate, while yolk color was assessed in four eggs per experimental unit. Haugh units (HU) were calculated according to the equation proposed by Nesheim et al. (1979) as HU = 100 x log (h + 7.57 - 1.7 w0.37), where h is albumen height (mm) and w is egg weight (g). Albumen height was measure at 1cm from the yolk with the aid of a caliper with 0.1mm precision. Eggs were weighed in a semi-analytical scale with 0.01g precision. Yolk and albumen were manually separated and weighed in a semi-analytical scale, and expressed as a percentage of the fresh egg. Yolk color was determined using DSM® color fan in a 1-15 scale by a single trained evaluator.

Data were tested for the presence of outliers, studentized residual normality (Cramér-von Mises test), and variance homogeneity (Brown-Forsythe test). Data were then submitted to analysis of variance and means were compared by the test of Tukey at 5% significance level. Statistical analysis was carried out using SAS® software package (Littell et al., 2002).

The effects of the dietary inclusion of caffeinated and decaffeinated coffee on layer performance are presented in Table 2.

There was no effect of treatment (p>0.05) on egg production, egg weight, egg mass, or feed conversion ratio. Because caffeine has a stimulating effect (Braga & Alves, 2000), it was expected that birds fed caffeinated coffee would search the feeder more frequently and consequently, would have higher feed intake. Moreover, due to the diuretic effect of caffeine (Rang et al., 2001), higher water consumption, which is directly associated with feed intake (Skinner-Noble & Teeter, 2004), would also be expected. Possibly, the caffeine dose applied was too low to affect any performance parameters.

Internal egg quality results are presented in Table 3. There was no statistical difference (p>0.05) among treatments relative to yolk and albumen percentages, Haugh units or yolk color. On the other hand, eggshell quality was affected (p<0.05) by the treatments (Table 4). The results show that the eggs of hens fed caffeinated coffee presented thinner shells and lower specific density, showing that caffeine intake interferes with calcium metabolism, as previously demonstrated by Hernandez-Avila et al. (1991) and Kiel et al. (1990) in humans. Liu et al. (2011) found that bone mineral density and calcium content of growing rats were reduced with the dietary inclusion of 0.2% caffeine for 20 weeks relative to the control feed. Lacerda et a. (2010) found that 42-d-old rats fed coffee daily presented low bone mineral density. On the other hand, Sakamoto et al. (2001) concluded that the consumption of caffeinated coffee does not stimulate bone loss in rats and believe this is a controversial issue.

Another essential matter to be considered is the cost of dietary coffee inclusion. Taking into account average coffee price in retail stores is R$10/kg and a dietary inclusion of 1.2%, this would mean an additional feed cost of R$120/ton, rendering its use unfeasible. No scientific articles on feeding coffee to poultry were found, and therefore, further studies using coffee dregs, because it is a cheap byproduct and with economic potential, are recommended.

It was concluded that feeding caffeinated coffee to commercial layers does not affect their performance or internal egg quality; however, eggshell quality is impaired. 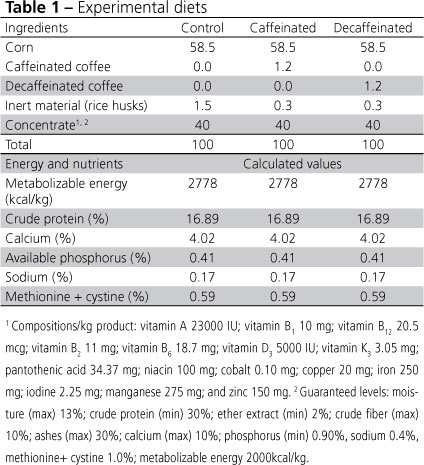 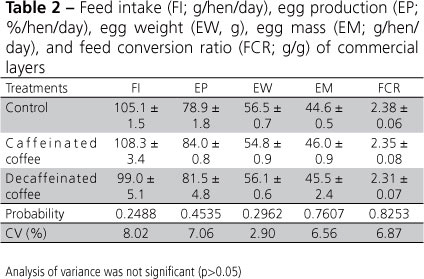