Studies about reduced tillage in soil cultivated with roots and tubers are rare and controversial. Thus, this study assessed the impact of tillage systems on physical properties of an Alfissol and on the growth of sweet potato tubers. To evaluate the soil physical properties, an experiment was conducted in a randomized block, split-plot design. The plots consisted of the treatments conventional tillage with mounds and reduced tillage with straw on the soil surface and the subplots of two sampling periods: 120 and 180 days after planting (DAP) of sweet potato. The soil physical properties - soil bulk density, total soil porosity, soil macroporosity and microporosity, penetration resistance and gravimetric soil water content were evaluated. For the assessment of the growth of sweet potato tuberous roots, an experiment was carried out where the plots corresponded to the soil management forms and subplots to four sampling periods: 90, 120, 150, and 180 (DAP). The ratios root length/diameter and fresh mass/length were evaluated. Conventional tillage with mounds, opposite to reduced tillage (no-tillage), resulted in lower values of soil bulk density, penetration resistance and microporosity, higher scores of total porosity and macroporosity, lower water maintenance in the soil surface (0-0.15 m) and increased vertical growth of sweet potato tubers. 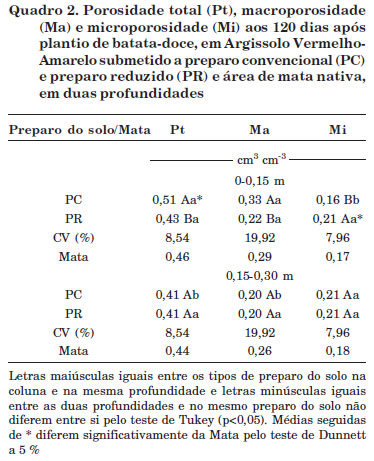