This study evaluated the chemical composition of peeled and unpeeled green banana Cavendish (AAA) flour obtained by drying in spouted bed, aiming at adding nutritional value to food products. The bananas were sliced and crushed to obtain a paste and fed to the spouted bed dryer (12 cm height and T = 80 ºC) in order to obtain flour. The flours obtained were subjected to analysis of moisture, protein, ash, carbohydrates, total starch, resistant starch, fiber. The green banana flours, mainly unpeeled, are good sources of fiber and resistant starch with an average of 21.91g/100g and 68.02g/100g respectively. The protein content was found in an average of 4.76g/100g, being classified as a low biological value protein with lysine as the first limiting amino acid. The results showed that unpeeled green banana flour obtained by spouted bed drying can be a valuable tool to add nutritional value to products in order to increase their non-digestible fraction.

This study evaluated the chemical composition of peeled and unpeeled green banana Cavendish (AAA) flour obtained by drying in spouted bed, aiming at adding nutritional value to food products. The bananas were sliced and crushed to obtain a paste and fed to the spouted bed dryer (12 cm height and T = 80 ºC) in order to obtain flour. The flours obtained were subjected to analysis of moisture, protein, ash, carbohydrates, total starch, resistant starch, fiber. The green banana flours, mainly unpeeled, are good sources of fiber and resistant starch with an average of 21.91g/100g and 68.02g/100g respectively. The protein content was found in an average of 4.76g/100g, being classified as a low biological value protein with lysine as the first limiting amino acid. The results showed that unpeeled green banana flour obtained by spouted bed drying can be a valuable tool to add nutritional value to products in order to increase their non-digestible fraction.

Banana, the largest herbaceous plant in the world, is among the ten most important crops in Brazil, which is the fourth largest producer in the world at over 7 million tones, produced by conventional cultivation systems (IBGE, 2012, RIBEIRO et al., 2012). One aspect of the Brazilian development, mainly due to the country's agricultural trait, is related to the development of its agro-industrial sectors. Like the sugarcane and citrus production complexes, other sectors of socio-economic importance have been explored with a comprehensive view in order to bring greater added value to agricultural products, avoid food waste, increase farmers' income, and develop alternative and nutritious food raw material (BORGES et al., 2009).

In the green stage, banana stands out for having a high starch/resistant starch content, deserving industrial interest for developing new products. Moreover, it has a wide range of vitamins and minerals present in both pulps and peels (LIMA et al., 2000). The green banana mass, a material obtained by grinding fresh bananas, dates from the mid-90s and has been studied for food production of green banana pulp mass (GBPM) and green banana peel mass (GPPM). And since it is high-starch-content biomass, it has gained ground in the development of products such as breads, gnocchi, pates, mayonnaise, pasta, and others (BORGES et al., 2009; VERNAZA et al., 2011).

Flour, the main byproduct of green banana, is one of the most common forms of preserving bananas as well as their masses. It has high starch content and is widely used in infant feeding as a source of energy and also has excellent medicinal properties, especially for cases of gastrointestinal infection (MARTINEZ et al., 2009).

Green banana is a food of great value recommended for several pathological conditions, including constipation and diarrhea, due to its ability to normalize colon functions. Since it has the ability to stimulate the proliferation of beneficial acidophilus bacteria in humans, its intake is recommended in cases of colitis, ulcerative colitis, gastric ulcer, uremia, nephritis, gout, cardiovascular disease, and celiac disease. When it is in the green stage, banana is considered to be a functional food of the prebiotic type (MASTRO et al., 2007). The most important factor for considering green bananas as a prebiotic food is its resistant starch content, characterized by the portion of the granule or its degradation products that are not digested or absorbed in the small intestine and are fermented in the large intestine (TEIXEIRA et al., 1998, ACEVEDO et al., 2012).

Another part of the banana that can be mentioned when one aims at increasing non-digestible fraction is the fibers contained in the peel. Just as resistant starches, fibers are not digested by the human organism due to the absence of enzymes capable of digesting this structure. Thus, undigested fiber is fermented by the colonic flora, which generates extremely interesting by products for human health.

Green (stage 2 of ripening: all green) (AURORE et al., 2009) Cavendish (Musa acuminate) banana was purchased from a local supermarket in Belém, Pará, Brazil. The fruits were washed and separated into two lots: one containing the whole fruit (pulp and peel) and the other only the pulp. To reduce the enzymatic browning, the two lots were dipped in 0.5% (w/v) citric acid solution for 10 min and drained. The lots were crushed in a blender (Poli model LB-15, Brusque, Santa Catarina, Brazil) until a homogeneous paste was obtained, which was subsequently fed into the dryer.

Drying experiments were performed in a conical spouted bed dryer with continuous feeding (Figure 1). The dryer consists of a conical base with an internal angle of 60º and an inlet orifice diameter of 50 mm. A cylindrical column with diameter of 200 mm and height of 300 mm is connected to the conical base of the dryer. The upper part of the equipment is composed of another cone and a cyclone. The operation started with the introduction of 1,036 g of inert material into the equipment. Spouting occurred when air was injected at the base of the bed. When the spout was established, the inlet air was heated to the desired temperature. The working temperature in the study was 80 ºC and drying air flow rate was fixed at 50 m3/h. Polyethylene pellets were used as the inert material with a diameter of 3.60 mm (±0.02 mm), a density of 905.23 kg/m3 (±3.82 kg/m3), and a sphericity of 0.850, while the height of particles studied was fixed at 12 cm. The green banana paste to be dried was fed continuously to the drying chamber at a constant rate of 3.91 mL/min (±0.15 mL/min) into the annular sliding layer from both sides by a peristaltic pump. The fine dried particles were separated from the outlet air in a cyclone and a bag filter. All the drying experiments were carried out in triplicate for each temperature. The flour samples were stored in air-tight plastic packs at ambient temperature (25±2 ºC) for further analysis.

The chemical composition of all samples was determined according to the following methods by the AOAC (CUNNIFF, 1997): moisture method 925.10, proteins method 920.152, lipids method 922.06, ash method 923.03, total dietary fiber method 985.29, and carbohydrates from the difference.

Starch content was determined through hydrolysis of the samples dried in an acidic medium, using 1.0 g of sample in 50 mL of 1 mol.L-1 HCl in a microwave oven, in water bath for 10 minutes at full power, as adapted by (CEREDA et al., 2004). The iodine test (I-KI) was used to confirm hydrolysis. After cooling and being added to 1 mol.L-1 NaOH (50 mL), the samples were diluted with distilled water to 250 mL. Sugar was determined by Layne-Eynon titration.

The tubes containing the waste and magnetic stirring bar magnets were partially submerged in an ice bath and 3 mL of 2M KOH were added under stirring. After 20 minutes, 10 mL of NaAc/HAc-sodium acetate buffer-glacial acetic acid-1.2M (pH = 3.8) were added and the stirring was stopped. Next, 0.1 mL of amyloglucosidase (NaAc 3200U/mL buffer/HAc, pH = 4.75) was added to the tubes and after the addition they were incubated in a water bath at 50 ºC for 30 minutes under constant agitation. After incubation, the tube content was made up to a volume of 20 mL with distilled water and then centrifuged (958 RCF) for 10 minutes. The tubes were placed in a spectrophotometer for reading. The resistant starch content was calculated using Equation 1.

The chemical composition of banana flour is found in Table 1. Significant differences are seen for the unpeeled sample in lipid fractions, ash, and fiber when compared with the peeled sample, a behavior also found by (GODIM et al., 2005) while working with Pavocan variety in green stage.

The use of banana peel as part of the meal may be a strategy of adding value mainly for the fibers where the differences were more significant (Table 1). The fruit's peel has a high mineral content and its cell walls have high fiber content, especially insoluble such as cellulose and hemicellulose, which are the reasons for its increased contents when compared with the fruit pulp (PEREIRA et al., 2013). The recommended daily fiber intake is between 25 to 30 g and insoluble fibers should make up the largest part of the intake (70 to 75%).Knowing the soluble fiber/insoluble fiber ratio is important for the assessment of functional properties, which is mentioned in the literature at 1:2 and 1:3 (MAHAN; ESCOTT-STUMP, 2003; FIGUEROLA et al., 2005).

In this paper, there was a high carbohydrate content, over 70% of which corresponding to starch, being more than half of that resistant starch (36%). Similar results were found by (MARTINEZ et al., 2009, BEZERRA et al., 2013).

The scientific evidence of non-digestible fraction as functional food is strong. (SHIH et al., 2007) demonstrated the positive effect of resistant starch intake in reducing the levels of glycated hemoglobin, fructosamine, and cholesterol as an improvement in antioxidant status in diabetic rats due to the increase in superoxide dismutase activity and decreased levels of malondialdehyde. Ramakrishna et al. (2000) noted a great reduction in frequency of diarrhea when resistant starch was added to the hydration pretreatment; the study was replicated using green bananas as a source of resistant starch and the authors obtained the same results (SCARMINIO et al., 2012). A reduction effect of resistant starch from banana in intestinal inflammation with fewer macroscopic and microscopic lesions, suggesting that introducing green banana flour into the diet can be a complementary strategy in the treatment of patients with intestinal inflammation (SCARMINIO et al., 2012; RABBANI et al., 2009).

The consumption of resistant starch can interfere in the action of oncogenic diets with high protein content due to the reduction of toxic products in the colon region (LE LEU et al., 2007).

Green banana flour, especially unpeeled, can be an important ingredient when the aim is to increase the non-digestible fraction in food and may have positive effects on health, which have already been demonstrated in the literature. The drying process used in this study did not alter the values of resistant starch, guaranteeing the same content as compared to raw material in natura. The characteristics found indicate a promising use of green banana flour in the preparation of food products for intestinal inflammation and celiac disease patients. Besides adding nutritional value to food products, unpeeled green banana flour also stands out for not creating production waste, thus representing the complete use of the fruit, increasing the yield and reducing manpower cost due to peeling was not required.

The authors declare no conflict of interest. 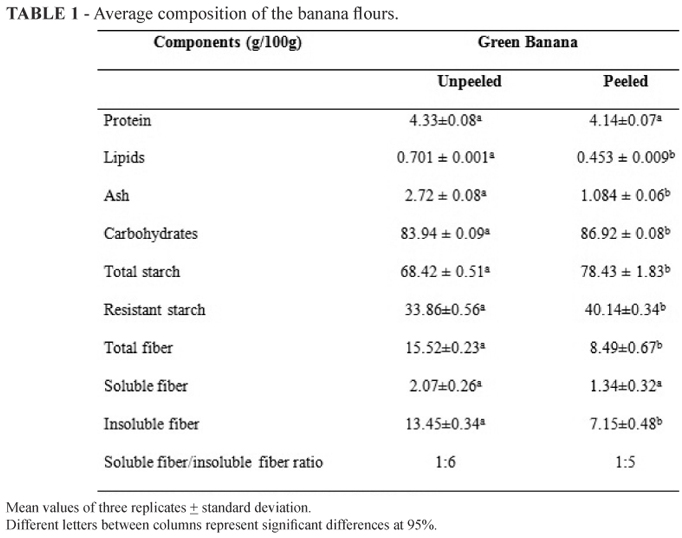