Aqueous leaf extract of Averrhoa carambola L. (Oxalidaceae) reduces both the inotropic effect of BAY K 8644 on the guinea pig atrium and the calcium current on GH3cells

It was previously showed that aqueous leaf extract (AqEx) of Averrhoa carambola depresses the guinea pig atrial inotropism. Therefore, experiments were carried out on guinea pig left atrium and on pituitary GH3 cells in order to evaluate the effect of AqEx on the cellular calcium influx. The atrium was mounted in an organ chamber (5 mL, Tyrode, 27 ± 0.1 ºC, 95 % O2, 5 % CO2), stretched to 10 mN, and paced at 2 Hz (0.5 ms, 400 V) and GH3 cells were submitted to a whole cell voltage clamp configuration. In the atrium, the AqEx (1500 µg/mL) shifted to the right the concentration-effect curve of the positive inotropic effect produced by (±) BAY K 8644, an L-type calcium channel agonist. The AqEx increased EC50 (concentration required to promote 50% of the maximum effect) of the inotropic effect of BAY K 8644 from 7.8 ± 0.38 to 115.1 ± 0.44 nM (N = 3; p < 0.05). In GH3 cells assayed with 500 µg/mL of AqEx, the L-type calcium inward current declined 30 % (from 282 to 190 pA). Nevertheless, the extract did not change the voltage correspondent to the peak current. These data suggest that, at least in part, the negative inotropic effect of AqEx on the guinea pig atrium is due to a reduction of the L-type calcium current. 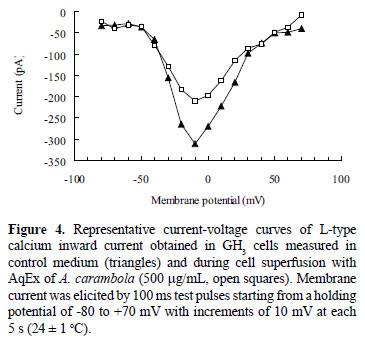