Fetal thyroid complications in pregnancy are uncommon, and are commonly related to the passage of substances through the placenta. The excessive iodine intake during the pregnancy is a well-known mechanism of fetal thyroid enlargement or goiter, and invasive procedures have been proposed for the treatment of fetal thyroid pathologies. In the present report, we demonstrate two cases from different centers of prenatal diagnosis of fetal thyroid enlargement and/or goiter in three fetuses (one pair of twins, wherein both fetuses were affected, and one singleton pregnancy). The anamnesis revealed the ingestion of iodine by the patients, prescribed from inadequate vitamin supplementation. In both cases, the cessation of iodine supplement intake resulted in a marked reduction of the volume of the fetal thyroid glands, demonstrating that conservative treatmentmay be an option in those cases. Also, clinicians must be aware that patients may be exposed to harmful dosages or substances during pregnancy.

The first case is a primiparous 27-year-old pregnant woman who presented with polyhydramnios at the 22nd week of the pregnancy. At the 28th week, a hyperechoic thyroid gland trespassing the 98th centile was observed (Fig. 1). Esophageal pouch sign was observed, and the polyhydramnios persisted. During anamnesis, the patient reported the use of vitamin supplements, including iodine, with unknown daily dosage. The patient was informed of the possibility of iatrogenic fetal goiter, and she spontaneously interrupted the intake of vitamins. After 1 week, the patient presented normal thyroid function tests performed 1 week before, and the size of the fetal thyroid gland reduced to 28 mm × 7 mm; however, the polyhydramnios and the pouch sign persisted. At the 31st week, the thyroid gland measured 25 mm × 5 mm, the amniotic fluid was normal, the pouch sign was invisible, and the amniotic fluid was normal even at the 35th week.

Fig. 1
Two-dimensional ultrasonography of fetal thyroid gland (arrows) at the 28th (A) and at the 31st week (B). The reduction in volume is visible in a few weeks.

The second case is a 32-year-old woman G1P0, presenting with a dichorionic diamniotic pregnancy and an enlarged hyperechogenic mass on the anterior neck of fetus 2 in the 22-week scan (Figs. 2, 3 and 4). When inquired about the use of iodine supplementation, the patient mentioned the regular use of vitamin supplements with individualized dosages, prescribed by a lay person. In the same week, magnetic resonance imaging (MRI) was performed, which revealed hyperintense thyroid glands in both fetuses on T1-weighted sequence. Polyhydramnios was present, but there were no signs of esophageal compression. The patient was advised to discontinue the supplement intake, to which she promptly agreed. Also, the thyroid function was evaluated, with normal results. Fetal ultrasound examination performed at the 25th week demonstrated a reduction in the dimensions of both thyroid glands, and the MRI demonstrated normal intensity in both thyroid glands on the T1-weighted sequence at the 33rd week (Fig. 5).

Fig. 5
A, B, and C: Magnetic resonance imaging (MRI) at the 28th week. A: T2-weighted sequence showing fetus 2 (asterisk) in polyhydramnios. B: T1-weighted sequence showing enlarged thyroid gland with hyperintense signal in fetus 2. C: The hyperintense signal is present in fetus 1, but with the thyroid gland presenting normal dimensions. D, E, and F: MRI performed at the 33rd week. D: the amniotic fluid volume remained normal (fetus 2, asterisk). E and F: Fetuses with thyroid glands presenting normal dimensions and intensity compared with images B and C.

In the end of the last century, studies reported the effects of subclinical hypothyroidism and neurocognitive development of offspring, thereby increasing the attention toward supplementation and research on the thyroid gland during pregnancy.66 Haddow JE, Palomaki GE, Allan WC, Williams JR, Knight GJ, O'Heir CE, et al. Maternal thyroid deficiency during pregnancy and subsequent neuropsychological development of the child. N Engl J Med. 1999;341(08):549-555. Doi: 10.1056/NEJM199908193410801
https://doi.org/10.1056/NEJM199908193410... 77 Teng W, Shan Z, Patil-Sisodia K, Cooper DS. Hypothyroidism in pregnancy. Lancet Diabetes Endocrinol. 2013;1(03):228-237. Doi: 10.1016/S2213-8587(13)70109-8
https://doi.org/10.1016/S2213-8587(13)70... The World Health Organization (WHO) has recommended the assessment of urinary iodine concentration (UIC) in pregnant and lactating women, a new standard to assess the iodine nutrition status. A UIC level < 150 μg/L is considered as an insufficient iodine status, between150 and 249 μg/L as adequate, between 250 and 499 μg/L as more than adequate, and > 500 μg/L as excessive. Furthermore, different guidelines recommend an increase in daily iodine intake to 250 μg during pregnancy and lactation.88 Stagnaro-Green A, Abalovich M, Alexander E, Azizi F, Mestman J, Negro R, et al; American Thyroid AssociationTaskforce onThyroid Disease During Pregnancy and Postpartum. Guidelines of the American Thyroid Association for the diagnosis and management of thyroid disease during pregnancy and postpartum. Thyroid. 2011;21(10):1081-1125. Doi: 10.1089/thy.2011.0087
https://doi.org/10.1089/thy.2011.0087... However, iodine supplementation can have other effects on pregnancy outcomes. A study including 9,245 pregnant women in the 1st trimester conducted in an iodine-sufficient region concluded that iodine supplementation in pregnancy must not exceed the UIC value of 250 μg/L. Values above this limit significantly increased the risk of developing subclinical hypothyroidism, and a significantly high risk of hypothyroxinemia was observed in pregnant women when the UIC was > 500 μg/L.99 Shi X, Han C, Li C, Mao J, Wang W, Xie X, et al. Optimal and safe upper limits of iodine intake for early pregnancy in iodinesufficient regions: a cross-sectional study of 7190 pregnant women in China. J Clin Endocrinol Metab. 2015;100(04):1630-1638. Doi: 10.1210/jc.2014-3704
https://doi.org/10.1210/jc.2014-3704...

Excessive iodine intake inhibits thyroid hormone secretion and thyroid biosynthesis in healthy individuals in an acute period. After a prolonged excessive iodine intake, the thyroid function returns to normal levels. This phenomenon is known as escape from Wolff–Chaikoff effect and protects against the overproduction of thyroid hormones after iodine overexposure. However, some individuals, including fetuses, do not escape these effects and develop acquired isolated hypothyroxinemia. The immature fetal and neonatal thyroid glands are unable to reduce the intracellular iodine transportation; although excessive iodine is available, hypothyroidism persists. This hypothyroidism can resolve spontaneously after the cessation of excessive iodine intake.1010 Overcash RT, Marc-Aurele KL, Hull AD, Ramos GA. Maternal iodine exposure: a case of fetal goiter and neonatal hearing loss. Pediatrics. 2016;137(04):e20153722. Doi: 10.1542/peds.2015-3722
https://doi.org/10.1542/peds.2015-3722...

With several etiologies, including congenital dyshormonogenesis, excess or deficiency of iodine, and others, fetal goiter is a less frequent consequence of fetal hypothyroidism, but increases fetal and neonatal morbidity due to congenital thyroid dysfunctions. The direct impact of thyroid masses can lead to obstruction of the airways and of the esophagus, increasing the risk of preterm birth from polyhydramnios and requiring a multidisciplinary team to secure the neonatal airway through the ex-utero intrapartum treatment procedure. The compressive effect on the airway and on the esophagus is a predictable complication, wherein MRI has an important role in the assessment of soft tissues and to characterize the permeability of the airway. Magnetic resonance imaging has also been used for virtual reconstruction of the airways and delivery planning in cervical masses.1313 Werner H, Lopes dos Santos JR, Fontes R, Belmonte S, Daltro P, Gasparetto E, et al. Virtual bronchoscopy for evaluating cervicaltumors of the fetus. Ultrasound Obstet Gynecol. 2013;41(01): 90-94. Doi: 10.1002/uog.11162
https://doi.org/10.1002/uog.11162...

In the cases presented here, identification of the possible cause of fetal goiter and cessation of supplemental ingestion led to conservative management with posterior regression of the goiter in both singleton and twin pregnancies. A previous study also described the regression of fetal hypothyroidism in twin pregnancy, or goiter, caused by excessive iodine intake.1414 Thomas JdeV, Collett-Solberg PF. Perinatal goiter with increased iodine uptake and hypothyroidism due to excess maternal iodine ingestion.HormRes. 2009;72(06):344-347.Doi: 10.1159/000249162
https://doi.org/10.1159/000249162...

Intra-amniotic levothyroxine injections have been proposed for the treatment of fetal goiter and hypothyroidism based on evidence suggesting that treatment delay increases the risk for impaired development in the infant.1515 Derksen-Lubsen G, Verkerk PH. Neuropsychologic development in early treated congenital hypothyroidism: analysis of literature data. Pediatr Res. 1996;39(03):561-566. Doi: 10.1203/00006450-199603000-00028
https://doi.org/10.1203/00006450-1996030... Intra-amniotic therapy presents good results in progressive and dysfunctional goiters, decreasing the risk of perinatal complications. However, evidence indicating the benefits on neurodevelopment outcomes is scarce and controversial. The evident reduction in thyroid volume after the cessation of iodine supplements in our cases associated with the risk of invasive procedures guided the decision to follow-up the pregnancy conservatively. Unfortunately, the effects of the thyroid function on the long-term outcomes of the neonates are unknown, as well as the results of the thyroid function tests after delivery.

In conclusion, we reported a case of a twin pregnancy affected by fetal goiter in both fetuses, which was induced by an excessive intake of iodine supplementation during the pregnancy, with successful regression after supplement suspension. Excessive iodine intake should be investigated as a possible cause of fetal goiter.

The authors have no conflict of interests to declare.

Thumbnail
Fig. 1
Two-dimensional ultrasonography of fetal thyroid gland (arrows) at the 28th (A) and at the 31st week (B). The reduction in volume is visible in a few weeks.

Fig. 1   Two-dimensional ultrasonography of fetal thyroid gland (arrows) at the 28th (A) and at the 31st week (B). The reduction in volume is visible in a few weeks. 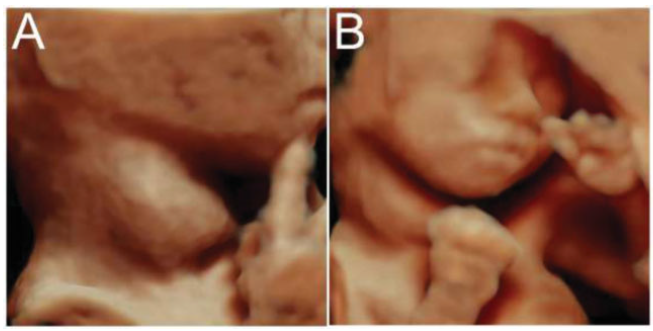 Fig. 5   A, B, and C: Magnetic resonance imaging (MRI) at the 28th week. A: T2-weighted sequence showing fetus 2 (asterisk) in polyhydramnios. B: T1-weighted sequence showing enlarged thyroid gland with hyperintense signal in fetus 2. C: The hyperintense signal is present in fetus 1, but with the thyroid gland presenting normal dimensions. D, E, and F: MRI performed at the 33rd week. D: the amniotic fluid volume remained normal (fetus 2, asterisk). E and F: Fetuses with thyroid glands presenting normal dimensions and intensity compared with images B and C.