Analysis of the behavior of thunderstorms in alagoas state, short-term forecasting

The thunderstorm frequency was studied using TRMM satellite and the DECEA data for the 10 year period (from 1998 to 2007). It was observed that the storms were more frequent in the summer months, with greater occurrence in March. The El Nino event inhibits the phenomenon (only 20% of cases of all), but in the La Niña and normal years, was observed an increase in days of storms up to 80% of the cases. The thunderstorms were associated with trade winds, with cyclonic curvature and in the high levels with ULCV, JSNEB and anticyclone. The thunderstorms were formed predominantly in northwestern ULCV in the entrance (warm side) and in the exit (cold side) of JSNEB. The observed vertical profiles of air and the dew point temperatures were similar to the forecasted profiles, constructed by the air parcels trajectories by HYSPLIT model, up to 48h and up to 24h antecedently, respectively. The index LI and CAPE+ predicted a very unstable atmosphere with 48 hours antecedence. 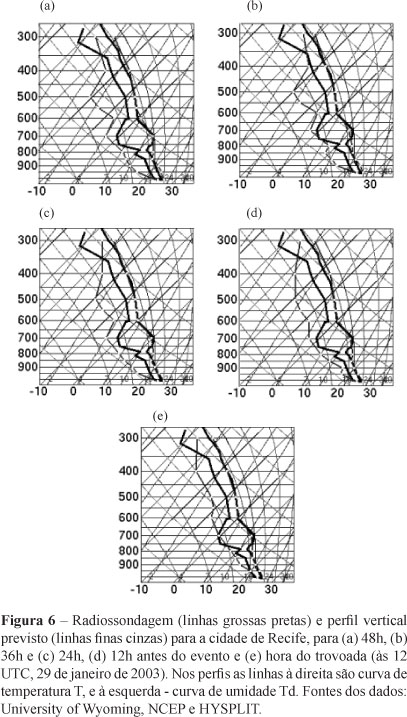