To evaluate patients undergoing arthroscopic release of a stiff elbow, with discussion of the technique, possible difficulties and risks. METHODS: Twenty-four elbow arthroscopy procedures were performed. All the patients were evaluated using goniometry before the operation and six months after wards and were rated using the Mayo elbow performance score (MEPS). RESULTS: Fifteen men and nine women underwent surgery (14 right elbows and ten left elbows). Their mean age was 34.58 years and length of follow-up, 38.41 months. Their mean gain of range of motion was 43.3º and of MEPS, 85.4. CONCLUSION: Arthroscopic liberation might enable better intrarticular visualization and enhance options to change strategy during surgery, reduction of surgical trauma and possibility of early rehabilitation, and this technique can reach similar or better results than open surgery. Disadvantages of arthroscopy are lack of ability of surgeons and higher cost of procedure. Both techniques report neurovascular complications, to avoid such problems the arthroscopic portals protocols must be rigorously followed. Arthroscopic release of the stiff elbow can enable range of motion gain, and also promotes high level of satisfaction by the decrease of pain and good cosmetic appearance. Some cases might demand adjuvant treatments. When correctly indicated, arthroscopy may be a safe surgical option with satisfactory outcomes.

To evaluate patients undergoing arthroscopic release of a stiff elbow, with discussion of the technique, possible difficulties and risks.

METHODS: Twenty-four elbow arthroscopy procedures were performed. All the patients were evaluated using goniometry before the operation and six months afterwards and were rated using the Mayo elbow performance score (MEPS).

CONCLUSION: Arthroscopic liberation might enable better intrarticular visualization and enhance options to change strategy during surgery, reduction of surgical trauma and possibility of early rehabilitation, and this technique can reach similar or better results than open surgery. Disadvantages ofarthroscopy are lack ofability of surgeons and higher cost of procedure. Both techniques report neurovascular complications, to avoid such problems the arthroscopic portals protocols must be rigorously followed. Arthroscopic release of the stiff elbow can enable range of motion gain, and also promotes high level of satisfaction by the decrease of pain and good cosmetic appearance. Some cases might demand adjuvant treatments. When correctly indicated, arthroscopy may be a safe surgical option with satisfactory outcomes.

Post-traumatic elbow stiffness has been recognized to be a common and difficult-to-manage condition that can interfere with patients' activities and their quality of life(1). The etiology of post-traumatic stiffness may be multifactorial and may include (among other causes): joint degeneration, heterotopic ossification, post-fracture joint incongruence and contraction of soft tissues(2).

Many open surgical procedures have been used to treat post-traumatic contracture of the elbow*3-9); however, the surgical route may cause additional damage to soft tissues and increase the risk of recurrence of the contracture, along with difficulty in implementing early physiotherapy because of pain(10). Open techniques may also be restrictive with regard to viewing for adequate exploration of all the structures involved in elbow stiffness(10).

Arthroscopic release may enable better viewing and increase the possibilities for changing strategy during the operation, decreasing the surgical trauma and starting early rehabilitation(10). Even in cases in which aponeurotomy of the brachial muscle and muscle-tendon stretching are necessary, prior arthroscopy may diminish the area of dieresis in open surgery.

Some studies have presented both the surgical technique and the possible complications caused by this procedure(11-18).

The present study had the aim of evaluating patients who underwent arthroscopy to release an elbow, with presentation and discussion of the surgical technique and the possible difficulties and risks.

Between February 2004 and July 2010, 34 operations were performed on patients with post-traumatic elbow stiffness, by means of arthroscopy. Among these operations, ten were excluded from the study because they did not fulfill the inclusion criteria or because of data loss or insufficient data.

The inclusion criteria were: follow-up of the patient for at least six months after the operation, angle outside of the functional pattern of 30º to 130º, previous treatment less than six months ago, absence of mental deficiency or disability, absence of stiffness secondary to primary osteoarthrosis, burns or ossifying myositis.

The patients were administered general anesthesia and were positioned in ventral decubitus with support for the elbow, which was positioned proximally so as to avoid compression of the anterior capsule. After asepsis, a sterile elastic tourniquet was applied carefully. As much serum as possible (up to a limit of 10ml) was infused intra-articularly.

The medial portal was made using scalpel blade 15, by means of dieresis only on the dermal layers, 1 cm proximally and 1 cm volarly (anteriorly) to the medial epicondyle. Following this, blunt divulsion was performed using straight Kelly forceps, until the lateral face of the humerus was reached. These forceps were then directed towards the region of the radial head (this could be felt when going across the capsule). Serum generally leaked out when the Kelly forceps were removed. An arthroscope with an optic device of 4 mm was introduced through this portal. The infusion pump needed to be regulated for a pressure of 30-40 mmHg and flow of between 50% and maximum.

The lateral portal had a volar location in relation to the radiocapitellar joint, and this could be confirmed using a needle and viewing intra-articularly, or aiming the light of the optic device within the joint and going towards it with the needle, from outside to inside. Sometimes, adherences could cause difficulty in viewing, and the surgeon's experience with the method could be decisive.

A 4 mm shaver without an aspirator was introduced through the lateral portal and the anterior capsule was removed carefully using the shaver (Figures 1 and 2) and a basket. The optic device and shaver were then exchanged between the portals in order to terminate the medial capsulectomy and also to view the coronoid (Figure 3). If the coronoid or the radial head caused bone blocks, the bone shaver could be used for the appropriate corrections (Figures 4 and 5).

The posterior central portal was 2 to 3 cm from the medial dorsal line of the upper arm and took a transtriceps line as far as the posterior joint capsule. The optic device was introduced through this portal, and the olecranon fossa and olecranon could thus be viewed. Another portal was constructed posterolaterally to the olecranon, and the shaver was introduced into it. Capsulectomy was performed using a soft-tissue shaver and basket (Figure 6), and with surgical repair of the olecranon if necessary (Figure 7) or widening of the fossa using a bone shaver (Figure 8) through this portal. The posterior bone blocking was tested by means of flexion-extension of the elbow, with the arthroscope in the posterior central portal.

At the end of the procedure, the portals were sutured using a single stitch (recommended). Only the lateral portal should be sutured with two stitches, because of the close proximity to the skin and to the joint, thus avoiding fistulas.

Continuous passive movement (CPM) with continuous plexus blockade would be ideal over the first three days. However, this anesthetic protocol and often the CPM itself have been impossible to implement in Brazil.

We left the elbow in the position in which the gain was required (generally extension), with an orthosis. This orthosis should be used for at least six weeks and should be removed four to six times during the day for movement, with a mean duration of one hour, and should then be replaced.

Physiotherapy should be started as soon as possible, without delaying for more than one week, and should continue for six months. Analgesic and edema control measures should accompany the gain in range of motion (ROM), at the limit of the pain.

After six months, the patients were assessed by means of the Mayo Elbow Score, and with a manual analogue goniometer, standardized in five-degree steps.

From February 2004 to July 2010, 34 surgical procedures were performed on patients with post-traumatic elbow stiffness. In eight cases, data loss occurred, or contact with the patient was lost, or the patient abandoned the treatment before the patient reached six months after the surgery. All of these cases were withdrawn from the study, as were another two patients who presented losses of flexion-extension less than 30 degrees. The first of these two patients presented loss of pronosupination due to adherences, with extension loss of 20º; and the other patient considered that his elbow flexion of 20º was esthetically unacceptable for his work as a model.

The elbows of two patients were operated twice. The first of these patients achieved a gain of 45º in the first operation, but evolved with pain caused by the radiocapitellar impact secondary to deformity of the radial head. In the second operation, the radial head was removed arthroscopically and the anterior capsule was again released, with a further gain of 35º. The second patient had a gain of 40º in the first operation and 30º in the second.

One of the patients evolved with heterotopic ossification: he presented large gains initially (around 70º), but then experienced losses, reducing to only 10º over a six-month period. There was one cases of joint fistula, which was sutured again, using two simple stitches, after the margins had been opened.

Two patients presented prior anteriorization of the ulnar nerve. A mini-access of length 2 cm was constructed in these cases and the ulnar nerve was separated, given that the medial portal would go exactly above the anteriorized nerve.

There were no neurovascular complications in our release series. However, one patient with lateral epicondylitis that was treated arthroscopically presented transitory paralysis of the posterior interosseous nerve.

In the case in which we obtained the least gain in the series (10º), the muscle-tendon contracture was an impediment to ROM gain, with bone procedures and capsule-ligament release. However, this patient refused to undergo any concomitant open procedure before the surgery.

In two patients, the ulnar nerve could be viewed arthroscopically (Figure 9).

Stiff elbow release is a well-established treatment, and with ROM gains that in most cases lead patients to functional results(3-9). Arthroscopic treatment for stiff elbow follows the same steps as used for open surgery, and the access chosen is the only difference. Therefore, it is expected that arthroscopy will present similar results, and in some cases, better results because of its lower aggressiveness towards soft tissues, as well as the more cosmetic characteristics of the procedure(10,11,13,15,17). On the other hand, weighing against arthroscopy, it presents a long learning curve and higher cost.

It needs to be emphasized that in a few cases, muscle-tendon stretching is required. In such situations, arthroscopy does not provide good results, unless the tendon stretching is combined by means of a mini-access. In our series, only one patient would have benefited from this stretching, but he refused other procedures unless they were arthroscopic.

Both with open surgery and with arthroscopy, neurovascular complications have been reported(10,12,14). In order to avoid such problems, the protocol for constructing the portals should be rigorously followed. In our series, we did not observe such complications.

Great care also needs to be taken in handling the shaver, and aspiration is inadvisable(10). In our experience, we have only allowed the force of the pump flow to act on the fluid circulation through the hand piece.

Other important precautions include correct closure of the lateral portal, so that fistulas are avoided, and only doing any removal of synthesis material after releasing the elbow.

Even with our good results, randomized clinical trials with larger samples comparing open surgery with arthroscopy might in the future provide more data that would benefit this surgical technique.

Arthroscopic release seems to be an effective and safe option for improving the range of motion in cases of post-traumatic stiff elbow. 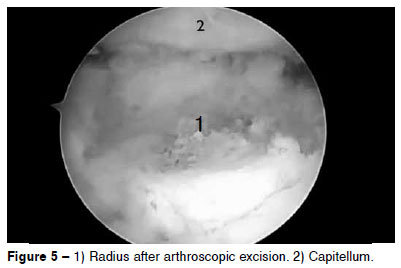