Macrobrachium amazonicum is the South American freshwater prawn with higher potential for culture (Kutty et al., 2000Kutty, M. N.; Herman, F. and Le Menn, H. 2000. Culture of other prawn species. p.393-410. In: Freshwater prawn culture: The farming of Macrobrachium rosenbergii. New, M. B. and Valenti, W. C., eds. Blackwell Science, Oxford.; Valenti, 2007; Moraes-Valenti and Valenti, 2010Moraes-Valenti, P. and Valenti, W. C. 2010. Culture of the Amazon river prawn Macrobrachium amazonicum. p.485-501. In: Freshwater prawns: Biology and farming. New, M. B.; Valenti, W. C.; Tidwell, J. H.; D'Abramo, L. R. and Kutty, M. N., eds. Wiley-Blackwell, Oxford. ). It is largely consumed as feed in northern and northeastern Brazil. This species is hardy and easily bred and has rapid growth and a high survival rate in tanks and ponds (Moraes-Valenti and Valenti, 2010; Marques and Moraes-Valenti, 2012Marques, H. L. A. and Moraes-Valenti, P. 2012. Current status and prospects of farming the giant river prawn (Macrobrachium rosenbergii (De Man 1879) and the Amazon River prawn Macrobrachium amazonicum (Heller 1862) in Brazil. Aquaculture Research 43:84-992.). Despite these advantages, there are many gaps in its technology. Thus, scientific investigation that focus on key points, such as feeding management in the hatchery phase, is necessary.

This experiment was set up according to a completely randomized design with four treatments (feeding strategies; Table 1) and three replicates. Artemia was firstly offered at five nauplii/mL and then gradually increased up to 15 nauplii/mL at stage IX. Inert diet was offered at 0.4 mg/day and then progressively increased to 1.8 mg/day based on leftovers on the bottom.

The inert diet was humid and composed of 34% chicken egg, 10% mussel, 10% marine fish, 4% dried milk, 2% wheat flour, 0.8% cod liver oil, 1.4% vitamin and mineral supplement, and 37.8% water (see Mallasen and Valenti, 1998Mallasen, M. and Valenti, W. C. 1998. Comparison of artificial and natural, new and reused, brackish water for the larviculture of the freshwater prawn Macrobrachium rosenbergii in a recirculating system. Journal of the World Aquaculture Society 29:345-350. for details). The ingredients were weighed, mixed in a blender, and cooked in water bath to pudding consistency. Portions of the diet were stored frozen at -18 ºC until required for feeding. The diet was weighed and sieved in an stainless steel sieve, 425-µm mesh, before feeding. It has been demonstrated that the common practice of breaking the feed into variable size pellets during larval development of M. rosebergii is not necessary or effective (Barros and Valenti 2003Barros, H. P. and Valenti, W. C. 2003. Food intake of Macrobrachium rosenbergii during larval development. Aquaculture 216:165-176.). We assumed the same for M. amazonicum. Proximate composition of this diet was 45% crude protein, 22.6% ether extract, 23.6% nitrogen-free extract, 8.8% minerals, 18.3% original dry matter, and 4989 kcal/kg gross energy, following Mallasen and Valenti (1998).

When 50% larvae in a tank reached the subsequent developmental stage, 10 individuals of each treatment were randomly sampled 15 min after the first feeding for determination of the gastrointestinal tract content (presence or absence of Artemia and inert diet). Each sampled larva was inspected under a stereomicroscope and feed ingested was classified into Artemia, inert diet, or Artemia + inert diet. Feed intake rate was calculated as the number of larvae ingesting a diet divided by the number of observed larvae and expressed as percentage.

On the 20th day after stocking, the experiment was finalized, survival was determined by counting live larvae and PL (postlarvae), and productivity was calculated as number of live PL/L. Dry mean weight of 300 larvae in stage I at the beginning of the experiment and of 50 PL collected from each tank at the end of the experiment were determined. The animals were rinsed with distilled water, dried on filter paper, and transferred to 10 pre-weighed aluminum cartridges. The cartridges were placed into an oven (60 ºC) for 24 h and then in a desiccator for 2 h. The dried larvae were weighed to the nearest 1µg by means of a Mettler-Toledo balance.

Larval stage indexes and gastrointestinal tract content were evaluated by descriptive analyses. The survival and productivity data were compared among treatments using G-test (Sokal and Rohlf, 1995Sokal, R. R. and Rohlf, F. J. 1995. Biometry: the principles and practice of statistics in biological research. 3rd ed. W.H. Freeman and Company, New York.). Mean weight gain was compared among the treatments by parametric ANOVA (F-test) followed by Tukey's test. Pearson's correlation coefficient (r) was used to test the correlation of survival and productivity with the number of days that larvae ate Artemia nauplii. For all statistical tests, significance level was set at P<0.05. The data were analyzed using the SAS package (Statistical Analysis System, version 8.02).

Larvae consumed Artemia nauplii from zoea II onward and inert diet from zoea III onward (Figure 2). Zoea III and IV larvae consumed more live feed than inert diet. In treatments A/In and In, more than 80% of the larvae consumed inert feed when it was exclusive. Although not quantified, yolk was abundant in zoea II and cannibalism was frequently observed inside tanks.

Survival and productivity significantly varied among treatments (P<0.01) (Figure 3). Mean values decreased from treatment AIn to A/AIn and from this to A/In. A very high mortality was observed in treatment In from stage V onward. There was significant correlation between survival (r = 0.84; P<0.05) and productivity (r = 0.86; P<0.05) with the number of days that larvae ate Artemia naupii. No significant difference was found among the treatments for weight gain by ANOVA (P>0.05) (Figure 3).

Data showed that M. amazonicum larvae ate Artemia nauplii and inert diet from stages II and III onward, respectively. Larvae fed only inert diet showed retarded development and very low survival and metamorphosis after 20 days. The best survival and productivity were obtained by supplying a combination of Artemia nauplii and inert diet from stage II onward. Feeding larvae with Artemia throughout their developmental cycles, followed by the introduction of inert diet at stage V, decreased survival and productivity, with an even higher reduction observed when Artemia was totally replaced by inert diet from zoea V onward. On the other hand, larval growth was not affected by the four feed management regimes tested.

The low feed intake in stage II is due to the large yolk reserves present at this stage, which supply metabolic requirements. This stage is facultatively lecithotrophic (Anger and Hayd, 2010Anger, K. and Hayd, L. A. R. 2010. Feeding and growth in early larval shrimp, Macrobrachium amazonicum, from the Pantanal, Southwestern Brazil. Aquatic Biology 9:251-261.) and larvae can save energy by avoiding eating. Previous experiments have showed that survival and productivity were very low when larvae were fed only Artemia nauplii throughout culture (Maciel and Valenti, 2014Maciel, C. R. and Valenti, W. C. 2014b. Effect of tank colour on larval performance of the Amazon River prawn Macrobrachium amazonicum. Aquaculture Research 45:1041-1050.a). A similar result was obtained in the present study, when larvae were fed only inert diet. Conversely, the best performance was obtained when animals were fed Artemia + inert diet during the entire larval cycle. Therefore, a synergic effect arises when these two feeds are combined. They may have a complementary nutrient profile or mechanism to improve nutrient assimilation. Artemia may provide exogenous enzymes, which remain functional inside the gut of M. amazonicum, or stimulus to activate endogenous enzymes of larvae, increasing nutrient assimilation from inert diet (Maciel and Valenti, 2014a).

In treatment In, no Artemia was provided and larvae ate only inert diet; high mortality started from stage V onward. Macrobrachium amazonicum hatch with a large quantity of yolk reserves, enabling them to survive without feed up to stages IV or V (Araujo and Valenti, 2010Valenti, W. C.; Daniels, W. H.; New, M. B. and Correia, E. 2010. Hatchery systems and management. p.55-85. In. Freshwater prawns: Biology and farming. New, M. B., Valenti, W. C., Tidwell, J. H., D'Abramo, L. R. and Kutty, M. N., eds. Wiley-Blackwell, Oxford .). During this phase, a large mobilization of lipids is observed and larvae can live until two weeks (Anger and Hayd, 2010Anger, K. and Hayd, L. A. R. 2010. Feeding and growth in early larval shrimp, Macrobrachium amazonicum, from the Pantanal, Southwestern Brazil. Aquatic Biology 9:251-261.). High mortality was observed throughout the experiment from stage V onward, although the gut of more than 80% of larvae was full of feed. This indicates that nutrient profile of inert diet did not match the requirements of larvae or larvae could not assimilate such nutrients without the presence of Artemia nauplii. Perhaps, larvae that attained metamorphosis balanced their nutritional deficiencies by feeding on other larvae. Cannibalism is very common in M. amazonicum larvae and postlarvae and was observed in the present experiment.

Artemia is essential for M. amazonicum larval development, although the combination with inert diet increases survival and metamorphosis. A trend of gradual increase in values of these variables was observed from treatment In, then, treatment A/In, followed by A/AIn and AIn. In essence, survival and productivity (related with metamorphosed animals) increased with the time larvae were fed Artemia nauplii.

Macrobrachium amazonicum larvae are omnivorous and polytrophic, but live feed is essential in the first stages and act as a complementary diet in the last half of larval cycle. There is a potential for inert diet to partially replace Artemia in the last phase of development if the nutrient composition matches requirements of larvae. The combination of Artemia nauplii and inert diet during the entire larval cycle is the best management to maximize productivity. 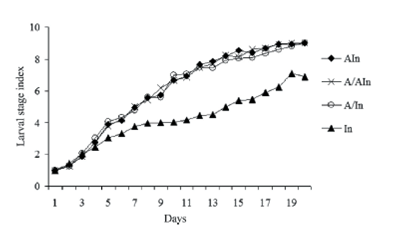 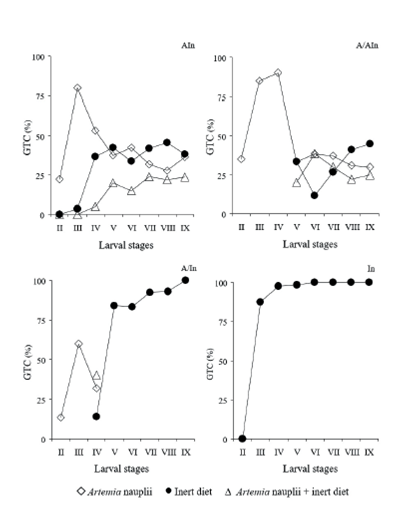