Attributes of arbuscular mycorrhizal fungi (AMF) were evaluated in a region in the process of desertification at Gilbués, Piauí, Brazil, with the objective of monitoring areas with different levels of soil degradation and recovery. Soil samples were collected at a depth of 0 to 0.2 m during the dry season of 2009 in four areas of ultisol, which were visually defined as: REC - an area under recovery by erosion contention and the planting of exotic grasses and legumes; DEG- an area with high degradation; IDEG - an area with moderate degradation; MN - an area of native vegetation. The following were analysed: root colonization, the most probable number of infective propagules (MPN), diversity indices (the Shannon-Wiener index, the Simpson diversity and dominance indices, the Pielou equitability index and the Margalef index) and the soil chemical attributes of pH, H+Al, phosphorus and organic matter, used as explanatory variables for the variability of the AMF attributes by multivariate analyses. Root colonization and propagule MPN were higher in the REC area. The Shannon-Wiener index, the Simpson dominance index and the Margalef index were lower in the DEG area, showing that they are good indicators of changes in the AMF community in degraded areas. By hierarchical cluster analysis, the DEG area showed higher dissimilarity in relation to the other areas. By principal component analysis, the Shannon-Wiener index, the Margalef index and the Simpson dominance index, and the phosphorus levels were the parameters that best explained the total variation. 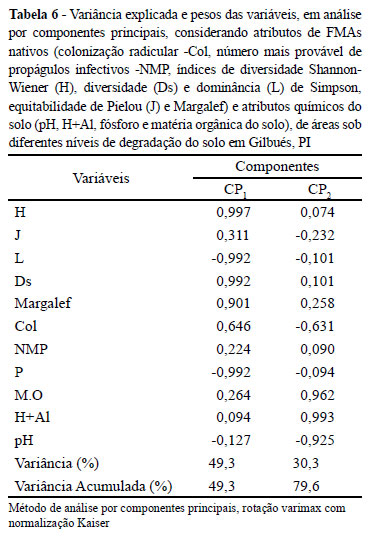