Human resources in primary health care: investments and the driving force of production

The present study describes the composition, the qualification, the salary investment, the workforce produce, and discusses users' accessibility in terms of time at Basic Health Units (BHUs). The study was performed at two BHUs from January to December 2008, and developed by analyzing administrative documents. In both, the composition of professionals according to education level revealed: 21% with a university degree, 27% with a secondary education, and50% with a primary education; showing a positive salary variation. The medical and nursing conducts were the majority at both. The production indicators confirmed: 25 and 37 min/person/month for accessibility, respectively for BHU A and B; R$ 8.43 and R$ 12.11/person/month for the salary investment at both BHUs, and 0.07 appointments/person/month at both BHUs. The professionals' available time is scarce compared to the potential of the demand. The production indicated an opportunity of care < 1 per person/month at a reduced cost.

The present study describes the composition, the qualification, the salary investment, the workforce produce, and discusses users' accessibility in terms of time at Basic Health Units (BHUs). The study was performed at two BHUs from January to December 2008, and developed by analyzing administrative documents. In both, the composition of professionals according to education level revealed: 21% with a university degree, 27% with a secondary education, and50% with a primary education; showing a positive salary variation. The medical and nursing conducts were the majority at both. The production indicators confirmed: 25 and 37 min/person/month for accessibility, respectively for BHU A and B; R$ 8.43 and R$ 12.11/person/month for the salary investment at both BHUs, and 0.07 appointments/person/month at both BHUs. The professionals' available time is scarce compared to the potential of the demand. The production indicated an opportunity of care < 1 per person/month at a reduced cost.

In primary health care, human resources are the essence of productive capacity, representing the highest technological value available for providing the population's needs. Primary health care has the entire live community as its work objective, which is, theoretically, turning to the most constructive and shared technologies in providing care. This present study considers the social responsibility of public financing, analyzing what is produced as health services and the dimensioned resources used in the process.

The health-illness process is acknowledged as being complex and socially determined. The multifaceted dimensions of reality are taken as reference and regard the singularity of health or illness phenomena affecting individuals and their families, in addition to the vagaries of production and reproduction processes of distinct social groups and more general structuring processes in society(1-2).

Today, primary health care in Brazil is stronger, particularly since the formulation of Operational Regulation/96, which defined intergovernmental transfers of resources. In 2006, the Health Pact enhanced municipal responsibility, constituting the principal financial source of primary health care. The Health Pact redirected the National Health System (Sistema Único de Saúde - SUS) actions to look beyond primary health care medium and high complexities, with a view to structuring public and private regional resources. The initiative is a worthy one, since the health system is historically a

heir of institutional practices marked by purchasing services in private initiatives, guided by interest and demand(3).

Modern health practices are going through an important but necessary crisis, since serious limitations are found in the ability to effectively respond to individuals and community's complex health needs. Health services encounter difficulties in the process of producing their essential product: providing care(4-6). Among many factors, political decisions, particularly external regulations, affect unity and interfere in service management in response to health needs, resulting in decentralized efforts in producing care(7).

When the notion of providing care is considered, it is not thought of as providing care at a health system level or as a simplified technical procedure, but as a full action with meanings and senses geared towards understanding health as a right(8). Intentions in work processes are not individual, but social in the way that work is guided towards social needs that are justified(9).

Another aspect regarding the work result as a form of wealth is that results are non-material and are not disconnected from the work itself(7,10). These intangible aspects already influence the manufacturing productive system and are analyzed in molding the system and in the search for understanding problems and implementing strategies(11).

Financing health services production is founded in the finite and limited resources of society, which is charged with and expected to enhance universalized access to care(12-14). Hence, this present study aims to determine the salary investment in human resources and results according to the following objectives: a) describing the composition and qualification of the work force; b) estimating salary investments of the work force; c) constructing indicators for these investments and for team productive capacity; and d) discuss users' access within a certain time perspective.

A study developed within two health centers (HC A and HC B) in the Capão Redondo district, in the Campo Limpo Health Area of the Municipal Health Department, working with the Primary Health Care Coordination of Centro Universitário Adventista de São Paulo (UNASP).

A specific data collection instrument, compatible with the information available in Excel 2007 spreadsheets was created. Secondary data from UNASP's administrative documents spanning the period of January/2006 to December of 2008 were used as a resource base. As for human resources, gross and nominal salaries in the country's currency, number of workers in functional categories and the teams' production volume according to the coordination records were considered.

In order to determine access, production and cost indicators, the following variables were selected: volume and physical production locations (medical appointments), time invested by all professionals and the resources invested in payroll. The number of inhabitants in the territory was established as a common denominator.

In order to calculate access indicators for professional services and availability according to time and technology, working agreement regime hours were considered, and were then transformed into worker hours/month in relation to the number of inhabitants. At the same time, the work force was examined in HC A and HC B according to their educational level, in addition to the work division within teams.

The professionals' schedule (dentists, doctors and nurses) was used to calculate the approximated projection of work division within teams.

Data regarding production were based on physical production reports from all teams, consolidated in the research periods and following the guidelines of the Guidelines Document of the Municipal Health Department(14).

Aside from administrative personnel, HC A is composed of three standard teams and HC B has six, in addition to a dental health team.

The professional composition regarding the professional's level of education demonstrated the following: university degree (21%), high school degree (27%) and basic educational level (50%) as the greatest percentage of workers. Community health agents represented the category with the lowest variation and the highest number in the three-year period in this study; they were also the largest work force within the teams concerning hired hours.

According to the Guidelines Document, the medical professional is recommended to occupy 50% of their time on appointments, 12% of their time on home visits and about 5% on group activities, respectively. The rest of their time should be committed to team meetings and other technical dimensions.

Nurses are recommended to occupy 35% of their time making appointments, 20% on home visits and 10% on team work. Weekly team meetings occupy 12.5% of their total time and, differing from the doctors, 17.5% of their time is set aside for the supervision of support activities, among other tasks.

Dentists occupy 35% of their time in appointments, 5% in group activities and 10% on collective procedures.

All profiles from the units researched may be observed in Figures 1 and 2, where, throughout the years, higher numbers of medical and nursing appointments were observed.

Production analysis in both HCs demonstrated that they are both influenced by seasonal features; for instance, in months where the temperature is low and the air humidity is relatively reduced, there is an increase in medical and nursing appointments and of procedures such as the use of inhalers, resulting from respiratory infections.

Access, costs and production indicators can be seen in Table 1.

Work division is previously defined according to the Guidelines Document, standardizing group activities with no basis on needs or assessment and epidemiological profiles. Certainly, schedule models resulted in production targets, established at the settling of the Municipal Health Department and OS-UNASP working agreement.

Despite definitions in the Guidelines Document, differences in HC production profiles suggest teams readjust their service offerings according to needs, altering production dynamics.

The highest cost regarding human resources was on doctors' salaries, due to a difficulty in settlement during agreement talks. On the other hand, salary differentiation reaffirms the doctor as a central figure in health care organization, and a high value is attributed to them regarding diagnosing and treating health problems.

As for results regarding the access indicator, the highest possibility for access occurred in HC B. The calculated costs indicator also demonstrated differences regarding investment per person in both communities, and in HC B, there were higher investments demonstrating a direct relationship between access and health investments.

Although HC B presented a production indicator similar to HC A in the year 2008, 0.84 appointments/inhabitant/year, in the city of São Paulo basic care medical appointments per inhabitant were 1.58(15-16) in the same year, demonstrating that this indicator in both HCs is below the expected.

Primary health care has radically changed the structure of work; however, measuring results is still traditio-nal, counting appointments, home-calls, groups and procedures, taking into account individual production records and approximating the roots of payment per production. Therefore, individual productivity is the most important reading.

Regarding team production, the coordinator figure is needed (although not officially), considering work diversity and team sizes. Although the importance of team work is still considered, work is measured by category, according to externally defined schedules that dilute team power.

The qualitative dimensions proposed by post-Sanitary Reform (embracement, hearing, guiding, bonding and co-responsibility) are theories that are not legitimized in quantitative measuring, due to the intangibility and subjective expressions of the production process that add quality to care relations. Meetings and many supervising activities regarding surveillance, as well as most intangible actions, are not seen as team productions. These actions comprise and add quality to care processes, promoting shared responsibility between professionals and users.

The speed of production can vary according to the problems presented by users. Production and consumption occur simultaneously, and they involve distinct professionals. The involvement of subjectivity in executing care is another feature. For instance, nursing and medical appointments demand a differentiated approach and time for a new user in comparison to a return appointment.

Hence, healthcare involves not only the individual providing the care, but also many other workers, from reception to the clerks who file the medical records. Therefore, human resources are the propelling power of primary health care, requiring proactivity in searching for continued work, using light and light-hard technologies, involving users as co-participants in the decision-making regarding providing health care. 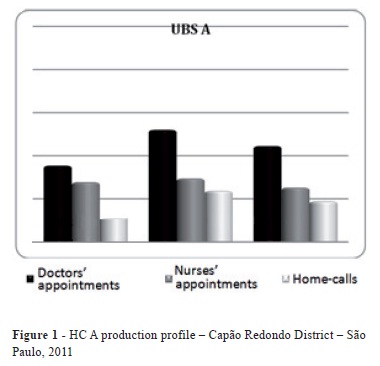 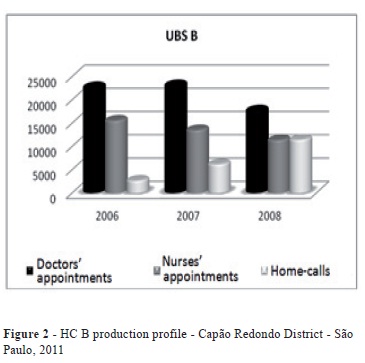