This is a fatal case of fungaemia due to Cryptococcus albidus in an elderly woman with type 2 diabetes mellitus who presented pleural effusion as the only clinical presentation. Not only infections of the pleura are uncommon presentations of pulmonary cryptococcosis, but these infections due to non-C. neoformans species are extremely rare. This report places C. albidus on the growing number of disseminated mycosis-causing agents in diabetic patients.

Cryptococcosis is an important opportunistic fungal infection that in the vast majority of cases is caused by Cryptococcus neoformans, a basidiomycetous encapsulated yeast that lives in diverse environmental niches. This mycosis, which is initially established in the respiratory tract after the inhalation of fungal cells (likely desiccated yeast or spores), presents most frequently as meningitis or meningoencephalitis, predominantly among HIV patients11. Rajasingham R, Smith RM, Park BJ, Jarvis JN, Govender NP, Chiller TM, et al. Global burden of disease of HIV-associated cryptococcal meningitis: an updated analysis. Lancet Infect Dis. 2017;17:873-81.. However, cryptococcosis can affect any tissue or organ of the human body and the risk of severe invasive or disseminated disease increases if the infection is left untreated and is highly dependent on the degree of immunosuppression of the patient22. Pappas PG. Cryptococcal infections in non-HIV-infected patients. Trans Am Clin Climatol Assoc. 2013;124:61-79.. To our knowledge, this report is the first to describe a fatal case of cryptococcemia, with pleural effusion as the only presentation, caused by a non-C. neoformans species, Cryptococcus albidus, in a non-HIV, but chronically ill, elderly female patient from Colombia. This case emphasizes the increasing risk for immunocompromised patients and those with underlying conditions, such as diabetes, to acquire systemic mycoses due to infrequent environmental pathogens.

An 85-year old woman with type 2 diabetes mellitus (T2DM) and arterial hypertension was admitted to a secondary-level hospital in Bogota on October 2, 2017 (day 0) with hyperglicemia. The patient presented with fatigue, polyuria, polydipsia and nocturia. On day 4, the patient had an altered state of consciousness and an episode of atrial fibrillation, which was assessed and reversed. Since there was a risk of central nervous system (CNS) thrombosis, anticoagulation was prescribed. A computed tomography (CT) scan of the head showed an old lacunar infarction on the left superior cerebellar artery and chronic ischemic microangiopathy. On day 7, hypoxia (85%) and another episode of atrial fibrillation occurred. Chest radiography showed opacification of the left hemithorax, the cardiac silhouette was not visible and prominent pulmonary hilar vessels with atelectasis on the right apical lobe were observed. Considering the size of the pleural effusion, the patient’s condition and the associated risks, on day 8, the patient was referred to an intermediate care unit in a tertiary-level hospital, in the same city.

On day 9, the blood count showed decreased number of erythrocytes (2.54 million cells/μL) with low hematocrit (23.7%) and hemoglobin (8.6 g/dL). Platelets and leukocytes counts were normal, although there was an increased percentage of neutrophils (78%). The blood chemistry revealed normal levels of electrolytes, blood urea nitrogen and creatinine. On the same day, a closed tube thoracostomy was conducted and 2,500 mL of pleural fluid, of bloody appearance, were drained. The pleural fluid had normal pH, glucose and albumin, with low protein (1.9 g/L) and high lactate dehydrogenase (2,437 IU/L). The leukocyte count was very low (23 cells/mL) with 80% polymorphonuclear and 20% mononuclear cells. The erythrocyte count was elevated (13,498 cells/μL) with 95% biconcave and 5% crenated cells. Altogether, the characteristics of the pleural fluid suggested an inflammatory process. No microorganisms were observed with Gram and Ziehl-Neelsen staining of the pleural fluid. PCR for mycobacteria and cultures for bacteria and fungi of the pleural fluid were negative. India ink was not performed on the pleural fluid as there was not suspicion of cryptococcal infection.

On day 12, the patient was transferred to a general ward. Two days later, chest and abdominal CT scans confirmed the pleural effusion on the left side (Figure 1) and showed an abdominal mass and renal atrophy on the left kidney, suggesting a metastatic pleural neoplasm. Blood cultures were performed and pleural biopsies were taken on days 16 and 18, respectively. However, the patient’s condition deteriorated, and the woman died after 21 days of hospitalization. Pleural biopsies reported a chronic nonspecific pleuritis. Cryptococcus albidus was recovered from the blood culture. The isolate was identified by the VITEK®2 YST ID card (bioMérieux, France) and confirmed by MALDI-TOF mass spectrometry with the MYLA® software (VITEK® MS, bioMérieux, France), with an acceptable confidence value of 99.9%. Thus, cryptococcemia was diagnosed.

Figure 1
Computed tomography scan of the chest showing a massive left-side pleural effusion with a compressive atelectasis in the right apical lobe (arrow).

This report presents a case of lethal fungaemia, with involvement of the pleura, caused by a non-C. neoformans cryptococcal species, an extremely rare presentation, whose diagnosis can be easily delayed or mistaken. As the lungs are the primary target organs of cryptococcal species, pulmonary disease is still an important infection that may be underdiagnosed due to the nonspecific symptoms and broadly categorized findings. Predisposing factors such as hematologic malignancies, lung cancer, solid organ transplantation, diabetes mellitus, glucocorticosteroid use, and hepatic cirrhosis increase the risk for developing pulmonary cryptococcosis, which may manifest as pulmonary nodules, masses or infiltrates, mediastinal lymphadenopathy or less frequently pleural effusions33. Chang CC, Sorrell TC, Chen SC. Pulmonary cryptococcosis. Semin Respir Crit Care Med. 2015;36:681-91.. However, in a recent review, only 50 cases of pleural effusion, as a manifestation of pulmonary cryptococcosis, have been reported44. Wee AC, Seet JE, Venkatalacham J, Tan SK. Cryptococcal pleural infection in a recurrent pleural effusion: a case report. Respirol Case Rep. 2018;6:e00294.. Even rarer are cryptococcal infections of the pleura caused by non-C. neoformans species. Nonetheless, this number may be underestimated because in many cases, as occurred in the case described herein, cultures from the pleural fluid are generally negative for Cryptococcus spp., making diagnosis even more challenging. Additionally, direct microscopy to observe yeast-like cells in the pleural fluid is not always possible, due mainly to the small amount of microorganisms present in the fluid55. Shankar EM, Kumarasamy N, Bella D, Renuka S, Kownhar H, Suniti S, et al. Pneumonia and pleural effusion due to Cryptococcus laurentii in a clinically proven case of AIDS. Can Respir J. 2006;13:275-8.,66. Young EJ, Hirsh DD, Fainstein V, Williams TW. Pleural effusions due to Cryptococcus neoformans: a review of the literature and report of two cases with cryptococcal antigen determinations. Am Rev Respir Dis. 1980;121:743-7..

While in many patients without predisposing condition, pleural effusion presents only as localized disease66. Young EJ, Hirsh DD, Fainstein V, Williams TW. Pleural effusions due to Cryptococcus neoformans: a review of the literature and report of two cases with cryptococcal antigen determinations. Am Rev Respir Dis. 1980;121:743-7.,1515. Rodríguez-Álvarez A, Fernández-Rial Á, Pérez-López A, Pita J. Cryptococcus neoformans pleuritis in an immunocompetent patient. Arch Bronconeumol. 2020;56:59-60., in the current case, positive blood culture for C. albidus indicated that the pleural effusion has possibly led to the dissemination of the microorganism. This case of an elderly woman who succumbed due to cryptococcal pleuritis highlights the importance of considering not only the risk factors of the patients, but also the emergence of new pathogens, requiring an appropriate and prompt diagnosis. In comparison with other cases of cryptococcal pleural infection, the case reported here was difficult to diagnose because of the variety of general signs and symptoms of the patient, her chronic condition of T2DM and advanced age. Initially, pleural tuberculosis was considered, then, the bloody appearance of the pleural fluid suggested metastatic pleural neoplasms or metastatic malignancies, and the onset of neurological symptoms also biased the diagnosis. Only post-mortem, fungaemia and disseminated cryptococcosis were diagnosed.

To conclude, this case emphasizes the importance of considering atypical infections like cryptococcal infection of the pleura in the differential diagnosis of patients with pleural effusion. In addition, it underlines the capacity of C. albidus to cause disseminated disease, which is uncommon, but is a very serious condition that should be deemed possible in diabetic patients and in the elderly and critically ill individuals. As reported here, the non-specific clinical features of pulmonary disease can hinder an opportune treatment, leading to an increased morbidity and even in some cases increased mortality rates. Thus, the correct and prompt identification and the surveillance of non-prevalent fungal species, such as C. albidus, causing disease in chronically ill individuals, will aid determining the real impact of these atypical fungi as etiologic agents of disseminated diseases. Additionally, the surveillance of antifungal susceptibility of emerging pathogens is recommended to help choosing specific management for individual patients, considering that species like C. albidus are less susceptible or even resistant to azoles77. Fonseca AJ, Fell JW, Boekhout T. Cryptococcus Vuillemin. In: Kurtzman C, Fell JW, Boekhout T, Editors. The yeast: a taxonomic study. 5th ed. Amsterdam: Elsevier; 2010. p.1665-740., one of the most commonly used drugs for the treatment of cryptococcosis and other mycoses. C. albidus must be then added to the growing number of recently described causative agents of disseminated mycoses in diabetic patients.

Figure 1   Computed tomography scan of the chest showing a massive left-side pleural effusion with a compressive atelectasis in the right apical lobe (arrow). 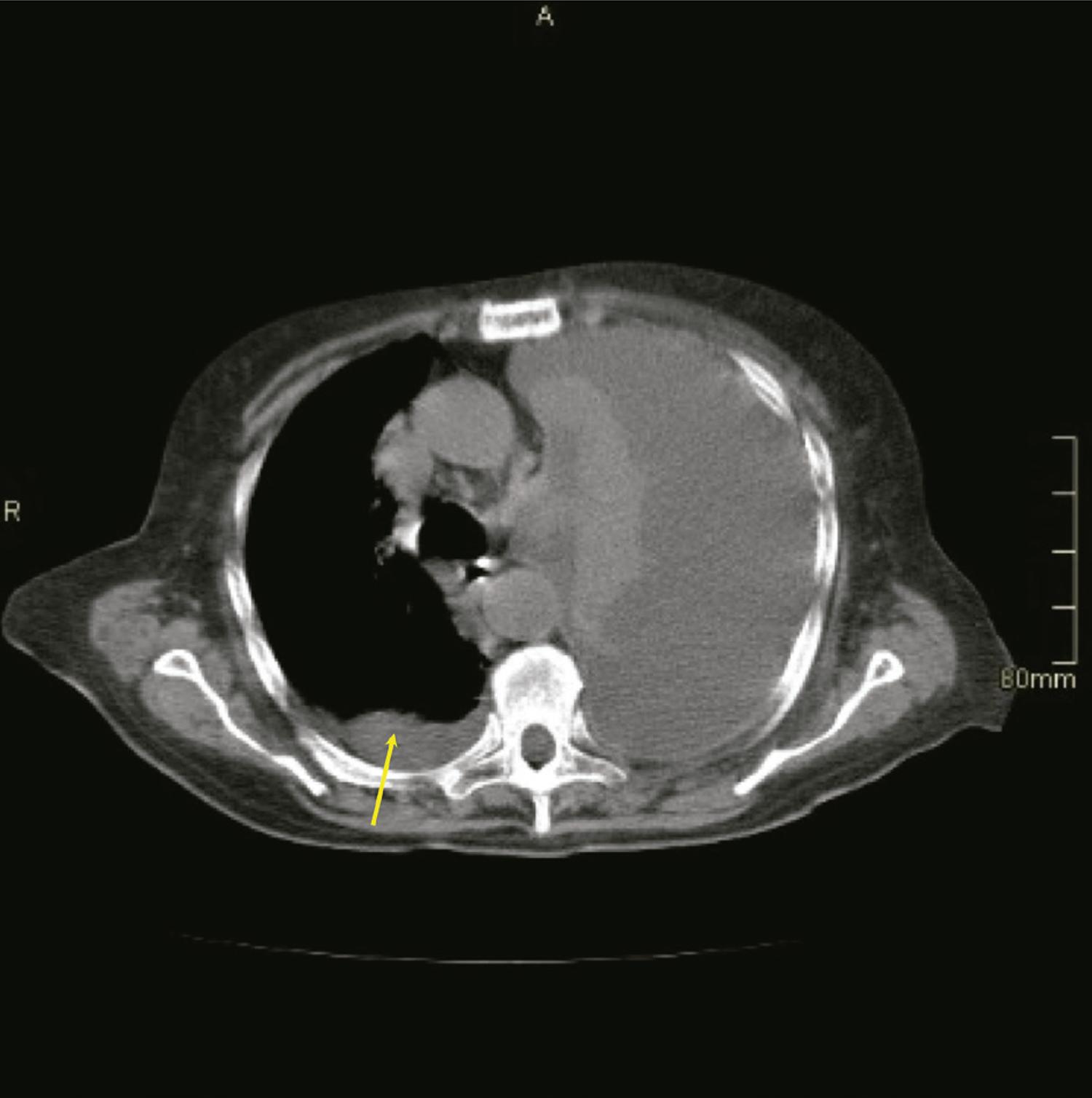