OBJECTIVE: To verify the effect of an educative nursing intervention composed of home visits and phone calls on patients' knowledge about the disease, self-care and adhesion to the treatment. METHODS: Randomized clinical trial with patients with recent hospitalization caused by decompensated heart failure. There were two groups: the intervention group, which has received four home visits and four phone calls to reinforce the guidelines during six months of follow up; and the control group, which has received conventional follow up with no visits or phone calls. RESULTS: Two hundred patients were randomized (101 in the intervention group and 99 in the control group). After six months, a significant improvement was observed in self-care and knowledge about the disease in the intervention group (P=0.001 and P<0.001), respectively; the adhesion to the treatment, measured and compared between the groups, was significantly higher in the intervention group (P=0.001). CONCLUSION: the strategy of home visits to patients who were recently hospitalized with decompensated heart failure was effective in improving the outcomes assessed and its implementation deserves to be considered in Brazil aiming at avoiding unplanned hospitalizations. NCT-01213862 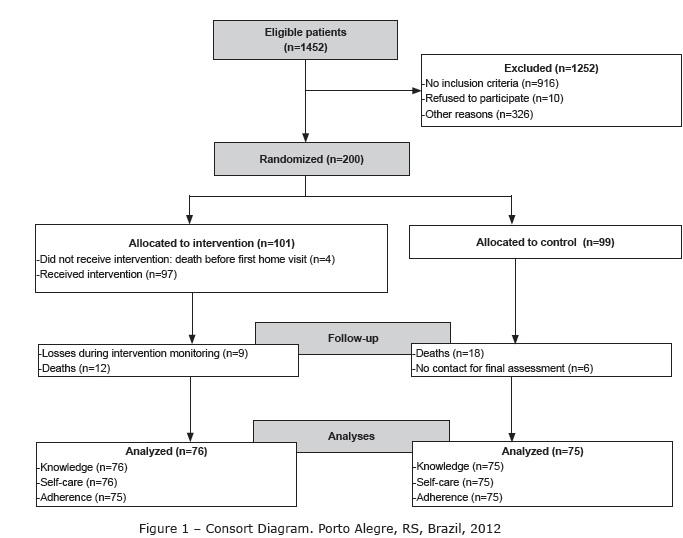