Giardia duodenalis: genotypic comparison between a human and a canine isolates

INTRODUCTION: Evidence suggests that giardiasis is a zoonotic disease. The present work aimed to evaluate the genetic identity of Giardia duodenalis isolated from human and dog fecal samples from Belo Horizonte. METHODS: Human and dog fecal samples were cultured for isolation of G. duodenalis. To determine the genotype of the isolates, primers that amplify a specific region in rRNA of the protozoan were used. RESULTS: Two G. duodenalis isolates were obtained, which belong to the subgroup A genotype. CONCLUSIONS: These findings suggest that the transmission of giardiasis follows a zoonotic pattern.

Giardia duodenalis: genotypic comparison between a human and a canine isolates

INTRODUCTION: Evidence suggests that giardiasis is a zoonotic disease. The present work aimed to evaluate the genetic identity of Giardia duodenalis isolated from human and dog fecal samples from Belo Horizonte.

METHODS: Human and dog fecal samples were cultured for isolation of G. duodenalis. To determine the genotype of the isolates, primers that amplify a specific region in rRNA of the protozoan were used.

RESULTS: Two G. duodenalis isolates were obtained, which belong to the subgroup A genotype.

CONCLUSIONS: These findings suggest that the transmission of giardiasis follows a zoonotic pattern.

Giardia duodenalis (G. lamblia or G. intestinalis) is a flagellated protozoan that inhabits the small intestine of humans and other mammals. Giardiasis is considered the main cause of nonviral diarrhea. Giardia duodenalis has a worldwide distribution, occurring in developed and developing countries. Approximately 200 million people in Asia, Africa and Latin America present symptomatic giardiasis and 500.000 new cases are diagnosed annually1.

Infection by G. duodenalis produces a variety of clinical manifestations, from asymptomatic cases to acute or chronic diarrhea and loss of weight. When children are affected, their development and growth can be compromised2.

In Brazil, the prevalence varies according to the locality and population studied, as well as to the methodology used for parasite detection. G. duodenalis occurrence in children from different regions of Brazil may vary from 13.8 to 63.3%3. The disease affects mainly preschool children, constituting a serious public health problem in this population.

The transmission of giardiasis occurs through the ingestion of water or foods with the parasite cysts. Direct transmission from person to person also constitutes another important mechanism of infection, particularly in collective institutions, such as daycare centers and orphanages. However, the main concern is that transmission of the disease may occur through the cycle animal/human.

Solid evidence suggests that giardiasis is a zoonotic disease, which can be transmitted between humans and domestic animals4-6. The genetic similarity between Giardia samples isolated from humans and animals and experiments involving cross-infections suggest that humans are susceptible to giardiasis of animal origin5-7. However, this mode of transmission may vary from one locality to another due to genetic heterogeneity in the parasite isolated8.

Although G. duodenalis isolated from different hosts are morphologically indistinguishable, based on molecular characteristics, it is possible to group them into genotypes. Genotype A can be divided in the subgroup A-I, composed of a mixture of human and animal isolates, and subgroup A-II, which consists only of human isolates. Genotype B comprises a genetically heterogeneous group, composed predominantly of human isolates, even though some isolates from animals have also been included in this group9. Other host-specific genotypes were isolated from dogs (genotypes C and D), bovines (genotype E), cats and rats (genotypes F and G)10. Moreover, it has been reported that the genetic heterogeneity of isolates varies according to the geographic region and has a worldwide distribution1,11.

The present work aimed to evaluate the genetic identity of one human and one dog G. duodenalis isolates from fecal samples collected in Belo Horizonte, State of Minas Gerais, in order to assess the possibility of the zoonotic cycle in this region of Brazil.

Giardia duodenalis was isolated from human and canine (BHFC1) fecal samples, through purification of cysts, following the protocol described by Roberts-Thomson et al13. Next, the material was washed with PBS pH 7.2 and transferred to bottles containing the culture medium TYI-S-33, with bovine bile supplementation and duplication of the cysteine concentration14.

The bottles were maintained at 37ºC and observed daily using an inverted microscope. In those bottles where the growth of G. duodenalis was observed, with trophozoites adhered to the bottle wall, subcultures were seeded every 72 hours. After establishing the cultures, sterility tests were conducted in thioglycollate medium, blood and Sabouraud agar. When the trophozoite exponential growth phase was reached (48-72h), the cultures were maintained in ice during 30 minutes and centrifuged (300 x g/10min). Nonadherent trophozoites were used for DNA extraction by the phenol chloroform method.

In order to classify the isolates according to G. duodenalis genotypes subgroups A or B, the allele-specific PCR technique that amplifies a region of the small subunit rRNA gene was used. Two separate reactions were performed using a common anti-sense primer15. Primer 1' was used as an amplification control, since it anneals to a common region of the Giardia RNA ribosomal gene (Table 1). The amplified 200bp fragments were submitted to electrophoresis on polyacrylamide gel 6% and visualized with silver nitrate staining.

Observation verified that the human and canine isolates of G. duodenalis are genetically similar, since both presented the subgroup A genotype. Amplification corresponding to the subgroup B was not observed (Figure 1). Control 1', which guarantees the sample quality and that has homology with all the described subgroups, was used in parallel to the reactions of genotypes A and B. Amplification of this ribosomal gene fragment was observed for all samples, confirming the identity of the amplified genomic segment (Figure 1). 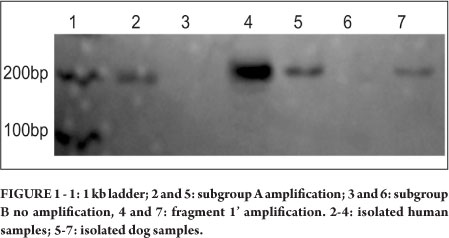 The finding that both of the analyzed samples showed genetic similarity, associated with the fact that G. duodenalis of genotype subgroup A is not a species-specific parasite, suggests that in Belo Horizonte giardiasis may be considered a zoonotic disease. These results are in agreement with previous studies in which 75% of the G. duodenalis isolates from humans and animals were included in the genotype A6.

The ability of parasites to establish infection in both human and domestic animals and cultural and social behavior factors, such as the maintenance and the very close contact with animals inside the domestic environment, may lead to the zoonotic transmission of giardiasis, contributing to increased prevalence of this parasitism in this state. In some regions of the State of Minas Gerais, G. duodenalis prevalence is still considered high, mainly in first infancy and collective institutions, such as daycare centers and orphanages. Deficiencies in basic sanitation, economic conditions of the population, precarious hygienic habits, malnutrition and immunodeficiency allow the establishment of infection, which in many cases manifests as the symptomatic form12.

This is the first study of axenization of fecal isolates of G. duodenalis in Minas Gerais, Brazil. The results presented herein open up perspectives for improving the characterization of the parasite and laboratorial diagnosis, as well as clarifying current understanding of important aspects of the epidemiology and clinical manifestations of giardiasis.

The evidence that transmission of giardiasis in Belo Horizonte, Minas Gerais follows a zoonotic pattern is relevant for the adoption of preventive recommendations, such as the improvement of sanitary conditions, especially those related to animal maintenance, and limiting contact with human populations, in order to reduce the incidence of the disease in this state.

The authors would like to thank João da Costa Viana and Weder Gomes de Oliveira for their technical support and the Fundação de Amparo à Pesquisa de Minas Gerais (FAPEMIG) for supporting this research.

The authors declare that there are no conflicts of interest.