Renal damage is a consequence of severe malaria, and is generally caused by sequestration of Plasmodium falciparum -infected erythrocytes in the renal microcirculation, which leads to obstruction, hypoxia, and ischemia. This triggers high mobility group box 1 (HMGB1) to send a danger signal through toll-like receptors 2 and 4. This signal up-regulates inducible nitric oxide (iNOS) and nitrotyrosine to re-perfuse the tissue, and also increases heat shock protein 70 (HSP70) expression. As no study has examined the involvement of intracellular secondary molecules in this setting, the present study compared the renal expressions of HSP70, HMGB1, iNOS, and nitrotyrosine between mice suffered from severe malaria and normal mice.

C57BL/6 mice were divided into an infected group (intraperitoneal injection of 10 6 P. berghei ANKA) and a non-infected group. Renal damage was evaluated using hematoxylin eosin staining, and immunohistochemistry was used to evaluate the expressions of HSP70, HMGB1, iNOS, and nitrotyrosine.

It appears that HMGB1, HSP70, iNOS, and nitrotyrosine play roles in the renal damage that is observed in mice with severe malaria. Only HSP70 expression is strongly correlated with the expression of HMGB1.

According to the World Health Organization, approximately 3.2 billion people were at-risk of malaria in 2015, with 214 million new cases in 106 countries. Among the new cases, approximately 88% were located in Africa, followed by Southeast Asia (10%) and the East Mediterranean (2%). There were approximately 438,000 deaths related to malaria in 2015, with 90% occurring in Africa, 7% occurring in Southeast Asia, and 2% occurring in East ekMediterranean 11. World Health Organization. Fact Sheet on the World Malaria Report 2015. Geneva: WHO; 2015 [updated 2016 April 19; cited 2016 October 9]. Available from: Available from: http://www.who.int/malaria/media/world-malaria-report-2015/en/
http://www.who.int/malaria/media/world-m... . As malaria is endemic in Indonesia, approximately 70% of the Indonesian population is at-risk and approximately 38,000 deaths are caused by malaria every year, with most occurring in east Indonesia (80%) 22. Kemenkes RI. Epidemiologi malaria di Indonesia. 1st edition. Jakarta: Ditjen P2PL; 2011. 13p. .

During stressful and hypoxic conditions, the body activates inducible nitric oxide (iNOS) to catalyze the production of nitric oxide (NO) and peroxynitrite, which act as vasodilators and help re-perfuse the hypoxic tissue 1313. Chua CL, Brown G, Hamilton JA, Regerson S, Boeuf P. Monocyte and macrophages in malaria: protection or pathology. Trends in Parasitol. 2013;29(1):26-34. . Peroxynitrite production can be measured using nitrotyrosine levels 1414. Nathan C, Ding A. SnapShot: Reactive Oxygen Intermediates (ROI). Cell. 2010;140(6):951-951.e2. . The body also increases the production of heat shock protein 70 (HSP70), which is a chaperone protein with many injury-related functions 1515. Aufricht C. Heat-shock protein 70: molecular supertool? Paediatr Nephrol. 2005;20(6):707-13. , such as repairing unfolded or mis-folded protein, anti-inflammatory effects, stimulating regulatory T-cells, and stabilizing the cytoskeleton by repairing its organelle and architecture. In addition, HSP70 prevents further renal damage and restores renal function 1616. O'Neill S, Harrison EA, Ross JA, Wigmore SJ, Hughes J. Heat-shock proteins and acute ischaemic kidney injury. Nephron Exp Nephrol. 2014;126(4):167-74. . The present study aimed to compare the expressions of HSP70, HMGB1, iNOS, and nitrotyrosine in the renal tissue of mice that were and were not infected with P. berghei ANKA. This information will be useful in examining these molecules’ involvement in renal injury that is caused by severe malaria.

The study’s protocol was approved by the ethical committee of our Faculty of Medicine (Universitas Brawijaya, Malang; 410/EC/KEPK/07/2014, date: July 10, 2014), and the study was performed between April 2014 and September 2015 in Parasitology Laboratory and Biomedical Laboratory Faculty of Medicine, Universitas Brawijaya, Malang. Eighteen female C57BL/6 mice (weight: 20-25g, age: 12-16 weeks) were purchased from the Eijkman Institute Jakarta. The mice were then divided into a non infected group (9 mice) and a group of 9 mice that were infected with 10 6 P. berghei ANKA in 0.2mL of blood via an intra-peritoneal injection.

The immunohistochemistry was performed in our Biomedical Laboratory (Faculty of Medicine, Universitas Brawijaya). The slides were incubated at 60 o C for 1h, and then sequentially treated using the following solutions: xylol (2× 10 min), absolute ethanol (2× 10 min), 90% ethanol (1× 5 min), 80% ethanol (1× 5 min), 70% ethanol (1× 5 min), and sterile distilled water (3× 5 min). Antigen retrieval was performed by heating the slides in a water bath at 95ºC for 20 min, cooling the slides to room temperature for 20 min, and then soaking the slides in a citric buffer chamber (pH 6.0). The slides were subsequently washed using phosphate-buffered saline [(PBS); 3× 2 min], treated using 3% H 2 O 2 in methanol, incubated for 15 min, and then washed using PBS (3× 2 min). Blocking was performed using a background sniper solution (15 min at room temperature), and then the slides were washed using PBS (3× 2 min).

Renal damage can be histopathologically observed in the medulla and cortex as glomerulus necrosis, inflammatory cell infiltration, mesangial cell proliferation, and glomerulus sclerosis. The expressions of HSP70, HMGB1, iNOS, and nitrotyrosine were measured by counting dark brown cells in 20 fields of view at ×1,000 magnification (quantitative scoring: 3+ to 4+). The evaluations were performed using a light microscope (Nikon Eclipse Ci), a calibrated camera (Optilab Plus 12 Megapixel), and Raster 3 software.

Normality was evaluated using the Kolmogorov-Smirnov test, and sample homogeneity was evaluated using the Levene test. Protein expressions were compared between the infected and non-infected groups using the Mann-Whitney and independent t tests. Spearman and Pearson correlation testing was used to evaluate correlations between the protein expressions. All data were analyzed using International Business Machines Statistical Package for the Social Sciences (IBM SPSS) software (version 22.0; IBM Corp., Chicago, IL), and differences were considered statistically significant at a p-value of <0.05.

FIGURE 1
A: Mean parasitemia between day 1 and day 14 after the inoculation. B: A thin blood smear from a mouse infected with Plasmodium berghei on day 14 reveals mature schizont (arrows).

The infected group exhibited a significant increase in parasitemia during day 5-10, which may have been related to parasite proliferation, and a subsequent decline starting on day 12, which could reflect the effects of the inflammatory process and immune response. However, the pro-inflammatory hypercellularity failed to eliminate the parasite, and the parasitemia subsequently increased significantly until day 14. During this period, we detected histopathological evidence of glomerular necrosis, infiltration of polymorphonuclear and mononuclear cells, mesangial proliferation, hemozoin deposition, and tubular edema. These findings are similar to the histopathological profile of acute renal failure caused by malaria, which manifests as acute tubular necrosis, interstitial nephritis, and glomerulonephritis 1818. Klopfleisch R. Multiparametric and semiquantitative scoring systems for the evaluation of mouse model histopathology - a systematic review. BMC Vet Res. 2013;9:123. . Furthermore, glomerulonephritis can be characterized by glomerular cell proliferation (e.g., mesangial, podocyte, and endothelial cells) as well as changes in the basal membranes, inflammatory cell infiltration, deposition of hemozoin, presence of infected erythrocytes in the glomerulus capillaries, necrosis, and deposition of immune complexes 1919. Nguansangiam S, Day NP, Hien TT, Mai NTH, Chaisri U, Riganti M, et al. A quantitative ultrastructural study of renal pathology in fatal Plasmodium falciparum malaria. Trop Med Int Health. 2007;12(9):1037-50. . The glomerular cell proliferation may be related to the secondary immune response to cytokines that are released by the host in response to the infection 2020. Wichapoon B, Punsawad C, Chaisri U, Viriyavejakul P. Glomerular changes and alterations of zonula occludens-1 in the kidneys of Plasmodium falciparum malaria patients. Malaria J. 2014;13:176. .

Although we detected a significant difference in the expression of nitrotyrosine, there is limited information regarding the expression of nitrotyrosine in models of Plasmodium infection. However, nitrotyrosine is a marker that is used to detect peroxynitrite (ONOO/ONOOH), which is mainly formed by the reaction of superoxide radicals with NO. Furthermore, reactive oxygen species (ROS) are produced during parasite vacuole digestion in infected erythrocytes, which can induce the rapid conversion of oxyhemoglobin into methemoglobin, as well as the production of H 2 O 21414. Nathan C, Ding A. SnapShot: Reactive Oxygen Intermediates (ROI). Cell. 2010;140(6):951-951.e2.,3232. Nathan C. 1992. Nitric oxide as a secretory product of mammalian cells. FASEB J. 1992;6(12):3051-64. .

We did not detect correlations between the expressions of iNOS and nitrotyrosine, or between their expressions and the degree of parasitemia (p>0.05). Elias et al. have suggested that parasitemia can be detected on day 3 and increases until day 14 or the last day of the study period 1717. Elias RM, Correa-Costa M, Barreto CR, Silva RC, Hayashida CY, Castoldi A, et al. Oxidative stress and modification of renal vascular permeability are associated with acute kidney injury during P. berghei ANKA Infection. PLoS One. 2012;7(8):e44004. . However, no significant change was observed in iNOS expression during days 3-12, although a general positive trend was observed during the study period. Thus, it appears that the maximum expression of iNOS and other markers occurs at approximately 3 days after Plasmodium infection. Although no exponential increases were observed in the expression values, it is also possible that the expressions will continue to increase, unlike the degree of parasitemia 2929. Mezayen RE, El Gazzar M, Seeds MC, McCall CE, Dreskin SC, Nicolls MR. Endogenous signals released from necrotic cells augment inflammatory responses to bacterial endotoxin. Immunol Lett. 2007;111(1):36-44. . Furthermore, the degree of parasitemia is a weak predictor of malaria severity and mortality, as it is not related to the levels of inflammation and organ damage. In contrast, infected erythrocyte sequestration is a strong predictor of malaria severity and vital organ damage (e.g., the brain in cases of cerebral malaria). Moreover, erythrocyte sequestration and malaria severity are associated with microvascular congestion by infected and uninfected erythrocytes 3333. Ponsford MJ, Medana IM, Prapansilp P, Hien TT, Lee SJ, Dondorp AM, et al. Sequestration and Microvascular Congestion Are Associated with Coma in Human Cerebral Malaria. J Infect Dis. 2012;205(4):663-71. . Another study also found that there was no association between the degree of peripheral parasitemia and the incidence of acute renal failure 3434. Dondorp AM, Pongponratn E, White N.J. Reduced microcirculatory flow in severe falciparum malaria: pathophysiology and electron-microscopic pathology. Acta Trop. 2004;89(3):309-17. .

Previous studies have indicated that NO and nitrotyrosine expression are related, although NO does not appear to be directly related to the expression of HSP70 or HMGB1. In this context, the direct interaction between ROS and NO produces nitrotyrosine and peroxynitrite, and the reaction of peroxynitrite with tyrosine can also generate nitrotyrosine. In addition, ROS can activate tyrosine residues to produce tyrosyl radicals that oxidize NO to produce nitrotyrosine. As nitrotyrosine can be formed by the reaction of tyrosine with other reactive molecules, the absence of a correlation between iNOS and nitrotyrosine is likely related to the multi-pathway production of peroxynitrite. However, the present study only considered two products of these pathways, and the dominant pathway remains unclear 3535. Zhou XJ, Vaziri ND, Zhang J, Wang HW, Wang XQ. Association of renal injury of nitric oxide deficiency in aged SHR: prevention by hypertension control with AT1 blockade. Kidney Int. 2002;62(3):914-21. .

Thumbnail
FIGURE 1
A: Mean parasitemia between day 1 and day 14 after the inoculation. B: A thin blood smear from a mouse infected with Plasmodium berghei on day 14 reveals mature schizont (arrows).

FIGURE 1   A: Mean parasitemia between day 1 and day 14 after the inoculation. B: A thin blood smear from a mouse infected with Plasmodium berghei on day 14 reveals mature schizont (arrows). 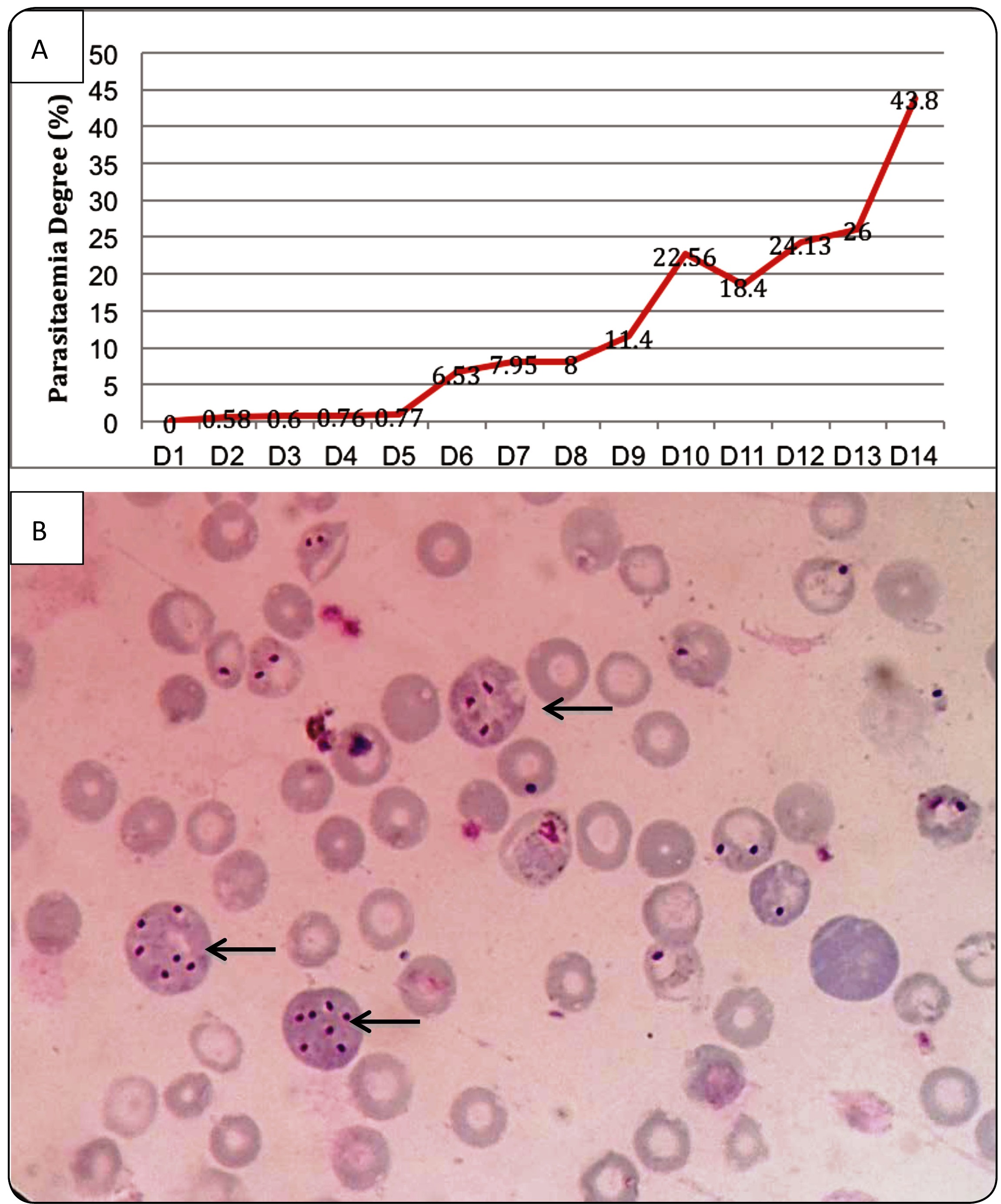 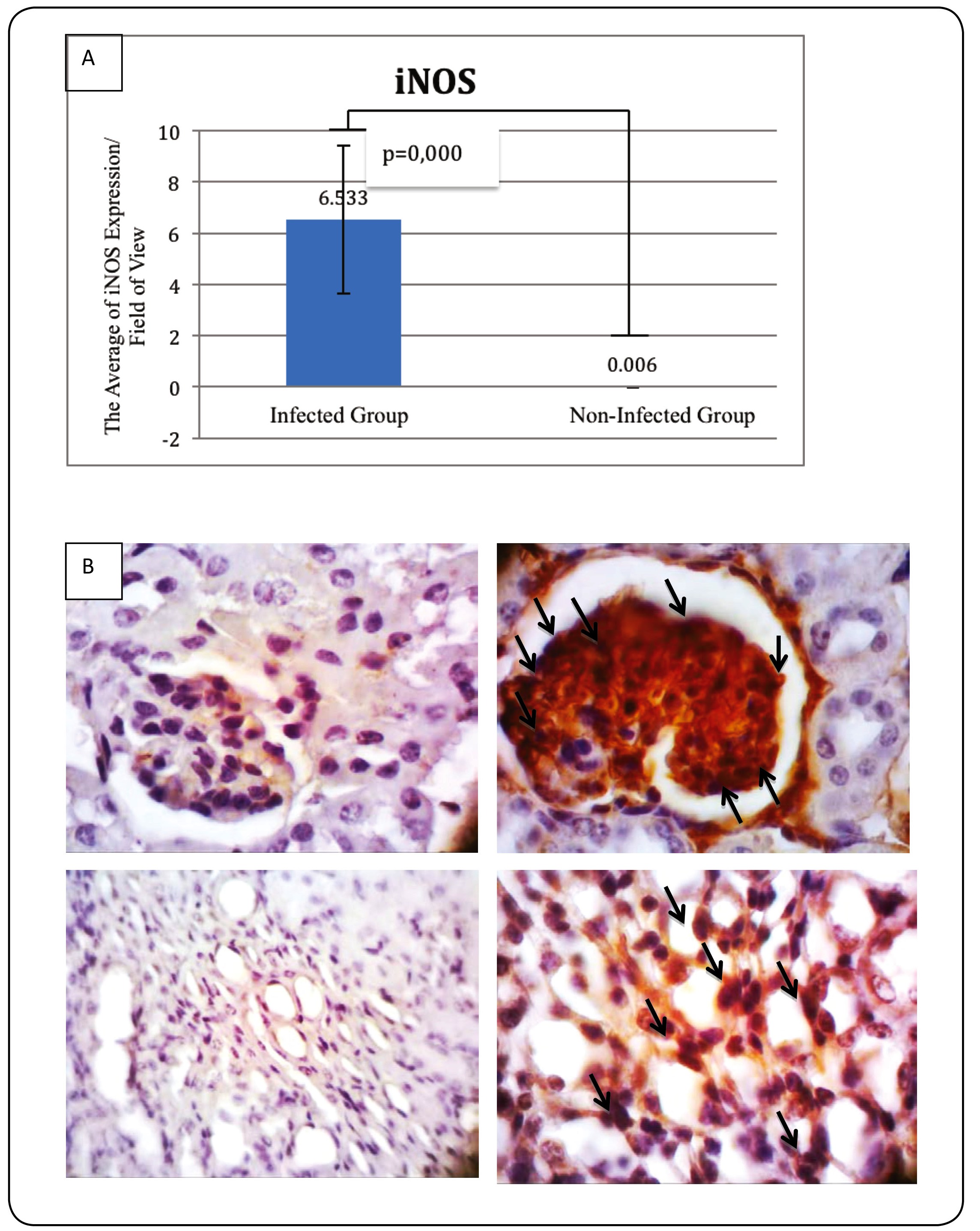 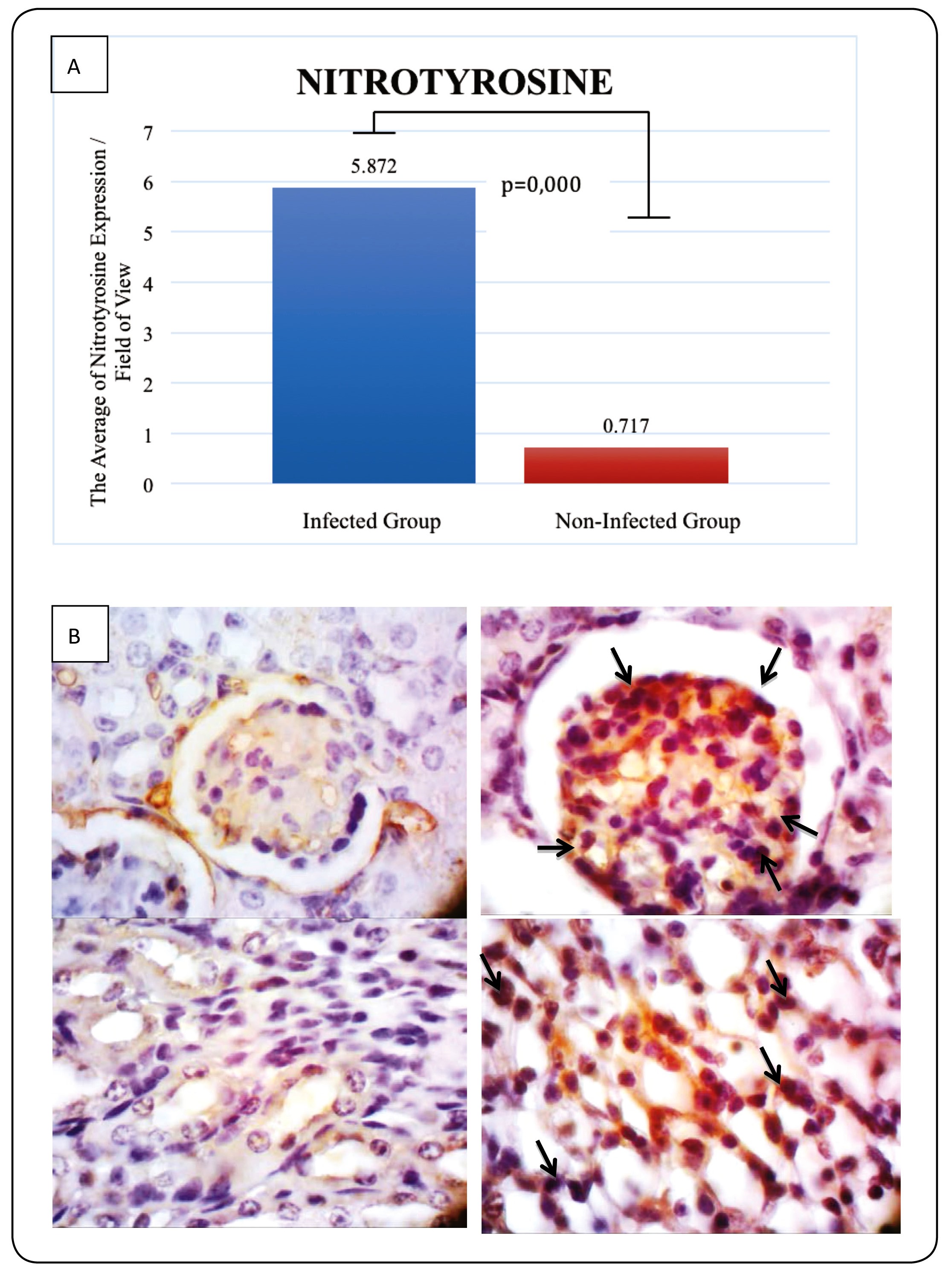