Occurrence and the susceptibility to antimicrobial agents in Pseudomonas aeruginosa and Acinetobacter sp. at a tertiary hospital in southern Brazil

Occurrence and the susceptibility to antimicrobial agents in Pseudomonas aeruginosa and Acinetobacter sp. at a tertiary hospital in southern Brazil

INTRODUCTION: The main mechanism of emerging resistance in Pseudomonas aeruginosa and Acinetobacter sp. isolates is the production of metallo-β-lactamases (MβLs). MβLs are enzymes capable of hydrolyzing cephalosporins, penicillins and carbapenems, but not monobactams (aztreonam), which are often used as antimicrobial therapy to treat nosocomial infections.

METHODS: An observational descriptive and retrospective study was designed to assess the frequency of MβLs among strains of P. aeruginosa and Acinetobacter sp. obtained from a tertiary hospital in southern Brazil.

CONCLUSIONS: The MβL indices determined confirm the global concern with this mechanism of resistance.

Hospital infections are a major concern for public health agencies and the internal committees of hospital infection control. Coco-bacilli and Gram-negative bacteria, such as Pseudomonas aeruginosa and Acinetobacter sp. respectively, are extremely important pathogens that cause serious infections in different parts of the human body and may lead to patient death1-3.

In the last decade, particularly in P. aeruginosa, enzymes were identified that promote hydrolysis of cephalosporins, penicillins and carbapenems but not monobactams, such as aztreonam, which are called arbapenamases or metallo-β-lactamases (MβLs) and confer resistance to these antimicrobial4,5.

The first reports of P. aeruginosa isolates producing MβLs in Japan occurred in 1991, since then Europe, Asia and America have also recorded such events6. In Brazil, the gene is prevalent bla SPM-1, originally isolated in São Paulo7. Currently, the increase in the number of isolates of P. aeruginosa with bla genes in intensive care units (ICUs) is a cause of serious concern8. Risk factors for nosocomial infections in this environment include exposure to highly invasive practices, such as mechanical ventilation, urinary catheters, intra-arterial and intravenous catheters and the use of antibiotics in large quantities9.

All metallo-β-lactamases (MβLs) hydrolyze imipenem, but this ability varies considerably and the rate of hydrolysis may or may not be correlated with the level of bacterial resistance to carbapenems. These enzymes are inhibited by EDTA (ethylenediaminetetraacetic acid) and other chelators of divalent cations and is thus correlated with its mechanism of action10,11.

This study was conducted in order to extend current knowledge regarding the incidence and susceptibility profiles of MβL-producing P. aeruginosa and Acinetobacter in a tertiary hospital in Passo Fundo, RS, Brazil.

Place of the study

This study was conducted at the Laboratory of Clinical Analysis of São Vicente de Paulo Hospital (Hospital São Vicente de Paulo, HSVP) in Passo Fundo, State of Rio Grande do Sul, Brazil. The hospital has approximately 590 beds and 60 beds for support in a constructed area of 50,000m2, with about 28,000 admissions per year.

A retrospective cross-sectional observational study was conducted that included patients at the HSVP and bacterial cultures tests performed from June to December 2008. The data collected were complied on a spreadsheet where the following information was recorded: name, age, sex, hospital ward, number of laboratory records for the patient, type of biological material, underlying disease, culture results, susceptibility to antimicrobials and use of antibiotics before and after treatment. The data of patients with positive cultures for MβL-producing or nonproducing P. aeruginosa and Acinetobacter sp. were compared. For ethical reasons, the name of the patient was noted to only to prevent replication and was not disclosed.

Data collection was performed by the internal system of HSVP computers in the Laboratory of Clinical Analysis using Mylab for Windows; this system is used to disclose the results of patients to medical assistants and in the Program Requirements and Medical Patients, where the outcome of hospitalized patients is registered.

The bacterial isolates were identified by classic morphological and biochemical tests, such as Gram stain, cytochrome oxidase, motility, TSI and pyoverdin production. The profile of antimicrobial susceptibility was determined by the disk-fusion method, in accordance with the standards of the Clinical Laboratory Standards Institute (CLSI), using the following agents: 30µg of ceftazidime (CAZ), 10mg of gentamicin (GEN), 110µg of piperacillin/tazobactam (PIT), 30µg of amikacin (AMI), 30µg of aztreonam (ATM), 30µg of cefepime (CPM), 5µg of ciprofloxacin (CIP), 10mg of meropenem (MER), 10mg of tobramycin (TOB), 20µg of ampicillin/sulbactam (SBA), 30µg of ceftriaxone (CRO) and 15µg of tigecycline (TGC). The phenotypic screening for the MβL production was performed by combined disk using imipenem (10ug) as the substrate and EDTA (750mcg) as an inhibitor12.

The percentage of strains producing MβL was calculated among cultures positive for pathogens. The data of the positive cultures and MβL-producing strains were compared with the type of biological sample, the profile of antimicrobial susceptibility and demographics, such as sex, hospital and age. Comparative analysis between the presence of MβLs and the different traits was performed by tthe Fisher exact test and Chi square test (χ2 test).

Other types of biological samples, such as cultures of catheters, drains, bronchial washings, secretions and cerebrospinal fluid samples, occurred less frequently. Among the 53 MβL-producing isolates, 11 patients were female and 42 were male, although differences between sexes was only significant for isolates of P. aeruginosa (p = 0.034), with an odds ratio of 2.361 (95%CI, 0.987 to 5,649) for males.

In MβL-nonproducing strains of Acinetobacter sp. the levels of antibiotic resistance were lower, with 34% of isolates resistant to ceftazidime, 42% to gentamicin, 26% to piperacillin/tazobactam, 24% to amikacin, 38% to aztreonam, 34% to cefepime, 42% to ciprofloxacin, 48% to tobramycin, 16% to ampicillin/sulbactam, 26% to ceftriaxone and only 2% to tigecycline and meropenem (Figure 1). 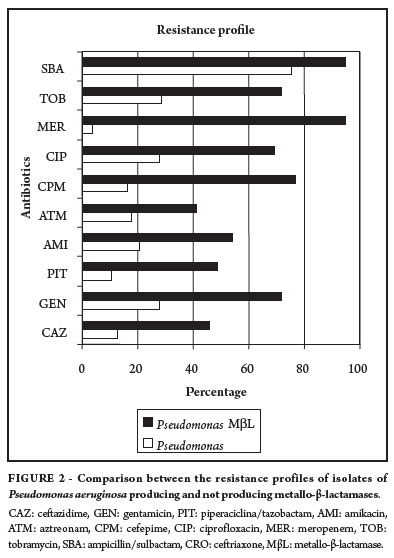 The frequency of MβLs among isolates of P. aruginosa in this study was 17.4%. In a study conducted at the same institution, Graf et al9 detemined a rate of 10.8% of producers with phenotypes of resistance genes among isolates of P. aeruginosa in a period of three months. Sader et al5 verified a frequency of 19.7% for MβL-producing isolates at a hospital in São Paulo. Rates ranging from 70% of isolates resistant to carbapenems were reported by Gaspareto et al13 in Porto Alegre, in a two-year study. The high frequency of MβLs verified emphasizes the importance of phenotypically investigating the presence of MβLs in routine laboratory tests, since the enzymes are located in mobile genetic structures that can spread between bacterial strains and lead to epidemic outbreaks.

In this work, MβL-producing Acinetobacter sp. represented 6.3% of the samples identified. Similar rates are reported by the Mystic Program Brazil 2003, where 8.8% of bacterial isolates causing infections in ICUs were multidrug-resistant Acinetobacter sp.14.

Bacterial resistance to the antibiotics tested was consistent with several previous studies involving both pathogens. In MβL-producing P. aeruginosa, resistance exceeded 60% in six of the 11 antibiotics tested. The lowest resistance was observed against aztreonam, which can be used as a treatment option. For Acinetobacter sp. the lowest rates of resistance were observed against amikacin, tigecycline and sulbactam/ampicillin, making these the therapeutic options. The sensitivity profile of MβL-producing isolates of Acinetobacter sp. indicates the possible presence of other associated β-lactamase type oxacillinase (blaOXA23), similar to the epidemic clone disseminated in Brazil15.

A significant increase in resistance to antibiotics was observed for these pathogens compared to MβL-nonproducing isolates. For Acinetobacter sp. even aztreonam shows diminished treatment effectiveness in pathogens producing this enzyme, probably due to the presence of other resistance genes, including those capable of hydrolyzing monobactams, such as extended spectrum β-lactamases (ESBLs). Reis et al16 reported that in some Brazilian hospitals, rates of carbapenem resistance increased approximately 12% for isolates of Acinetobacter sp. The profile of the Acinetobacter sp. strains could be the type of enzymes associated with blaOXA-23. Dalla-Costa et al15 observed this strain in two hospitals in Curitiba, together with P. aeruginosa, and observed their similarity to MβL-producers due to carbapenem resistance and high sensitivity to aztreonam.

The high rate of resistance to most antibiotics tested indicates that the selection of resistant strains may be occurring and that the use of potent antibiotics may be contributing to this selection. Reis et al17 identified a strain of Acinetobacter sp. resistant even to polymyxin B, a worrying fact, since this is an extremely powerful drug and is often used as a last choice for the treatment of pan-resistant strains of Acinetobacter sp. According to Reis et al17, use of polymyxin B may have played a role in the selection of resistant strains, arguing against the theory of clonal spread. Furthermore, two isolates showed an identical genetic pattern, which raises the possibility of transmission of strains occurring between patients and the ability to create epidemics.

High rates of resistance observed in inpatient units, such as ICU-C, CCCN and Post 7, is probably related to the severity of cases among these patients, since these units are for hospitalized patients with more severe illnesses and greater susceptibility. MβL production occurred mainly in samples from the respiratory tract, stressing that both pathogens are important colonizers of artificial respiration and in patients with nosocomial pneumonia; another important risk factor is diabetes mellitus, which causes insulin resistance. Lautenbach et al18 reported that 44.6% of P. aeruginosa isolates were from respiratory tract samples. In nosocomial samples from Porto Alegre, Pulcinelli et al16 verified a rate of 70.7% in lower respiratory tract isolates of P. aeruginosa. In 2008, Carneiro et al19 reported that in a hospital in Londrina, Parana, the incidence of patients with ventilator-associated pneumonia was 25.2% for Acinetobacter sp.19.

According to the Manual of the Department of Infection Control, from 2009, of the HVSP, in-hospital precautions must be taken to prevent the spread of multidrug-resistant strains, which included contact precautions for patients colonized and/or infected, the use of aprons with long sleeves and appropriate use of procedure gloves and hand hygiene with antiseptic and water or alcohol gel before and after attending such patients, individual use of thermometers, stethoscopes and sphygmomanometers, individual, or preferably fourth cohort control within the hospital20.

MβL rates (17.4% of P. aeruginosa isolates and 6.3% of Acinetobacter sp. isolates) verified among the HVSP isolates were similar to those of other Brazilian institutions. Detection of MβL production in routine laboratory exams provides the foundation and assists in the selection of the appropriate antimicrobial therapy. With the spread of MβL-producing strains in hospitals around the world, knowledge regarding the prevalence of MβL production is essential to develop policies for empirical therapy in high risk units, where rates of infection by these microorganisms are high. Surveillance, combined with monitoring and daily review of cultures in the microbiology laboratory and the use of antimicrobials, are effective measures to identify outbreaks in time to carry out measures to optimize and intervene in the conduct adopted in the various hospital sectors21. Thus, the rates of MβLs verified confirm the concern of the global emergency of this resistance mechanism.

The authors would like to thank the Clinical Laboratory and the Committee on Infection Control at the São Vicente de Paulo Hospital for allowing them to develop this study. The authors are also grateful to Dr. Gilberto Barbosa da Luz for his review of the manuscript.

The authors declare that there is no conflict of interest.