INTRODUCTION: Acute respiratory tract infections are the most common illness in all individuals. Rhinoviruses have been reported as the etiology of more than 50% of respiratory tract infections worldwide. The study prospectively evaluated 47 elderly individuals from a group of 384 randomly assigned for acute respiratory viral infections (cold or flu) and assessed the occurrence of human rhinovirus (HRV), influenza A and B, respiratory syncytial virus and metapneumovirus (hMPV) in Botucatu, State of São Paulo, Brazil. METHODS: Forty-nine nasal swabs collected from 47 elderly individuals following inclusion visits from 2002 to 2003 were tested by GenScan RT-PCR. HRV-positive samples were sequenced for phylogenetic analysis. RESULTS: No sample was positive for influenza A/B or RSV. HRV was detected in 28.6% (14/47) and hMPV in 2% (1/47). Of 14 positive samples, 9 isolates were successfully sequenced, showing the follow group distribution: 6 group A, 1 group B and 2 group C HRVs. CONCLUSIONS: The high incidence of HRV during the months of the influenza season requires further study regarding HRV infection impact on respiratory complications among this population. Infection caused by HRV is very frequent and may contribute to increasing the already high demand for healthcare during the influenza season.

CONCLUSIONS: The high incidence of HRV during the months of the influenza season requires further study regarding HRV infection impact on respiratory complications among this population. Infection caused by HRV is very frequent and may contribute to increasing the already high demand for healthcare during the influenza season.

Such studies have shown that rhinoviruses cause the great majority of these respiratory illnesses. Advances in diagnostic techniques have enabled more complete identification of the viruses involved in respiratory infections12.

In Brazil, the National Influenza Immunization Program has included the elderly since 1995 and influenza surveillance has been systematic established recently but no data are available regarding the presence of other respiratory pathogens in community-dwelling elderly individuals in Brazil13.

The purpose of this study was to evaluate the occurrence of human rhinovirus, influenza A and B, respiratory syncytial virus and metapneumovirus among the elderly population presenting flu or cold symptoms in Botucatu, State of São Paulo, Brazil.

In a previous study14, 384 elderly were followed during the winter months to evaluate the appearance of respiratory acute symptoms. This study was conducted using a systematic random sample (n = 384) of the elderly population of the urban area of Botucatu, a city of 130 thousand inhabitants in the central-western region of the State of São Paulo. The initial choice of the samples was based on a registry of 9,000 families for a population-based study of work accidents in the municipality14. Criteria for the inclusion of randomly selected subjects in the study were as follows: age 60 years-old or over, living in Botucatu, at home during one of the three attempted home visits, not institutionalized and agreeing to participate in the survey by providing written informed consent. Of the total number of individuals, 365 were interviewed and 47 patients contacted the research group reporting acute respiratory symptoms; a nasal swab was collected in a subsequent visit. Forty-nine nasal swabs from 47 symptomatic elderly individuals, presenting symptoms for up to 7 days, who participated in household survey study and who contacted the group after the inclusion visits, were collected during years of 2002 and 2003 for the virological study. A questionnaire was also completed to obtain demographic and clinical data and evaluate the immunization status of the individuals.

Clinical specimens were processed and separated in two aliquots: one for molecular methods (Influenza A/B, RSV, hMPV and HRV) and other for viral isolation (influenza A/B and RSV).

All specimens were processed on the day of their collection and treated with antibiotics. One hundred microliters were inoculated into 2 monolayer wells each of Hep-2 and MDCK cells cultured in 24-well polystyrene microplates (Corning, New York, NY). All cultures were incubated at 37ºC and examined every day for the cytopathic effect (CPE) over a period of 12 days. Two blind cell passages were performed independent of the appearance of the CPE. The presence of respiratory viruses was suggested by CPE. Independent of the presence or absence of CPE, all medium passages were collected for nucleic acid extraction and subsequent GeneScan analysis.

The RT-PCR GeneScan method for influenza A and B, respiratory syncytial virus and metapneumovirus was performed as described elsewhere15. This technique uses a positive strand primer 5'-end-labeled with fluorescent6-carboxyfluorescein (6-FAM). Following RT-PCR, amplified products of each specimen were pooled and purified by precipitation with ethanol to remove the excess salt. Amplicon analysis was then performed on an ABI Prism 310 Genetic Analyzer (Applied Biosystems) with GeneScan software (version3.1.2), using a 47cm capillary with POP-4TM polymer. Electropherograms were examined and specimens showing discrete amplicon peaks within < 1 nucleotides of the respective positive control peak were considered positive.

RT-PCR for HRV was performed as described elsewhere16, with minor modifications. The eluted RNA was transcribed into cDNA with Moloney Murine Reverse Transcriptase (MMLV-RT; Invitrogen, Carlsbad, CA) and virus specific oligonucleotide primer, for 1h at 37°C. Following MMLV-RT denaturation at 70°C, virus-specific oligonucleotide primer and Platinum Taq DNA Polymerase (Invitrogen, Carlsbad, CA) were added and 40 cycles of PCR were run, consisting of denaturation (45 sec at 95°C), annealing (45 sec at 61°C) and DNA extension (1 min at 72°C). RT-PCR targets the hypervariable part of the 5'NCR, the entire VP4 gene and the 5' terminus of the VP2 gene. RT-PCR was standardized with sensitivity of 10-3,25 TCID50/100μL. The presence of PCR products was visualized by agarose gel electrophoresis according to their 549bp molecular weight. Positive (HRV 39) and negative water controls were tested in all reactions.

This study was approved by the Research Ethics Committee of Botucatu Medical School according to resolution no. OF. 42/2006 CEP and written consent was obtained from all elderly individuals.

Of the 49 samples tested by different molecular assays 15 (30.6%) were positive: rhinovirus was detected in 14 (28.6%) samples and hMPV in one (2%) sample. None of the samples were positive for influenza A/B or RSV by the GeneScan assay or cell culture. Regarding HRV infections, 9/14 (64.3%) occurred during the influenza season: in five cases, samples were collected during winter months, 4 in the autumn, 4 in summer months and 1 during spring. Figure 1 shows the samples collected and positive cases over the study period. 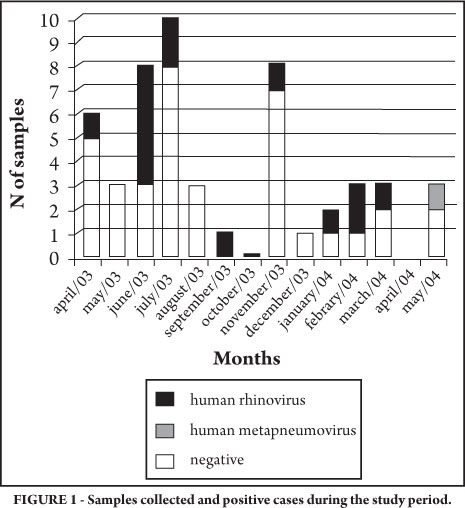 To evaluate the ability of the assay to genotype HRVs, a total of 14 unknown clinical respiratory isolates were sequenced. Nine isolates were successfully sequenced and identified. A total of 6 (66%) HRVs were identified for group A, 1 for group B (11%) and 2 (22%) for group C. Figure 2 depicts the maximum likelihood tree showing the pattern of distribution of Brazilian isolates into three main clusters, representing the HRV species A, B, and C. To strengthen this analysis, homologous sequences of the main HRV species isolates were used as species references (the GenBank identities of these references are shown in the tree) (Figure 2).

This first study assessing viral etiologies among symptomatic elderly individuals in the influenza immunized community in Brazil verified 30% viral detection by different molecular assays. Donalísio et al14 described a vaccine coverage of 63.2% in elderly individuals from Botucatu, SP, Brazil in 2002. A total of 384 individuals were initially recruited from a databank of 9,000 family, but only 47 (12.4%) contacted the research team following the inclusion visit. The individuals selected (n=384) are likely to be representative of the elderly population in the region, despite the low number of samples collected.

In the present study, HRV was the most frequently detected agent. HRV infections are common among patients, including the elderly, and account for 25 to 50% of respiratory illnesses among community-dwelling elderly individuals2. Few reports exist in Brazil regarding rhinovirus respiratory infections. In a recent study, the authors verified that HRV infections were very frequent in the Brazilian adult population, resulting in more severe presentation that the common cold. Bellei et al17 reported that approximately 50% of HRV-infected individuals presented influenza-like illness and that it was circulating in the same period as influenza.

Complications due to HRV infection seem to be more frequent in the elderly, particularly in home care services. In two studies conducted at nursing homes and long-term care facilities for the elderly, outbreaks were described with mortality rates varying of 6 to 21%. In both studies, the deaths were directly attributed to acute infection caused by HRV6,18.

HRV phylogenetic analyses show a distribution of groups coherent with the literature. An interesting fact was observed regarding HRV C. The first study describing this new HRV group was conducted in mid 200619. Thus, it was very surprising that HRV C was detected infecting a patient as early as 2003. This original data supports the hypothesis that this new group had been already circulating before the study by Lamson et al19.

Falsey et al5 described a frequency of 1.7% for hMPV infection in symptomatic elderly individuals. In this study, a frequency of 2% was determined, in agreement with the literature.

Influenza and RSV usually cause complications in the elderly population, but in this study, neither of them were detected. The sensitivity of GeneScan RT-PCR for Influenza virus, RSV and hMPV is very high, described by Erdman et al as a sensitive and specific method for viral detection20. During 2002 and 2003, low activity of influenza virus in the elderly population in the community was described in the city of São Paulo, Brazil21. High influenza immunization adherence and variability in activity of the RSV pattern22 are implicated in the current data. RSV activity can be variable over several years and this variation is well documented in the worldwide literature22-24.

Based on data obtained in the present study, infection caused by HRV is very frequent and may contribute to increasing the already high demand for healthcare during the influenza season. Analysis of viral etiology among this immunized elderly population showed that HRV was the main agent responsible for healthcare demands. The high incidence of HRV during the months of the influenza season requires further investigation regarding the impact of HRV infection on respiratory complications in this population.

The authors declare that there are no conflicts of interest.

FAPESP, CNPq, CAPES. ASA Watanabe was sponsored by the CNPq.