METHODS: Population-based cross-sectional study including 972 adults (aged 20 to 69) in the city of Pelotas, Southern Brazil, conducted in 2006. The frequency of non-diet soft drink intake in the 12 months prior to the study was evaluated by the question: "In general since last <month>, how many times did you have a non-diet soft drink?". The answers were dichotomized for the analysis. Intake of non-diet soft drinks five times or more per week was considered regular intake. The association between the outcome and sociodemographic, behavioral and nutritional variables was tested using the chi-square test for heterogeneity and linear trend and a multivariate analysis was performed through Poisson regression with a robust variance.

Soft drink consumption has become increasingly prevalent in recent decades. Many authors13,18,21 have associated soft drink overconsumption with increased prevalence of obesity and its consequences. Review13 and meta-analysis studies18 have showed that the growth in the consumption of sugar-sweetened beverages is associated with increased energy intake, weight gain, obesity and diabetes. In a systematic review in 2008, Wolff and Dansinger22 argued that although observational studies support the hypothesis that consumption of soft drinks cause obesity, there are few clinical trials to confirm this hypothesis. While more research studies are needed, the World Health Organization (WHO)21 emphasizes that there is sufficient evidence to discourage consumption of soft drinks in a healthy diet.

The WHO recommendation has been a priority of public health policies in many countries. The recommended maximum calorie intake is 10% of total dietary energy intake.21 Soft drinks have been banned from schools in England and France and their sale has been restricted or prohibited in the United States (Los Angeles, Philadelphia and Miami).18 The Dietary Guide for the Brazilian Population

A cross-sectional population-based study was conducted in the city of Pelotas, Southern Brazil. Pelotas is located in the extreme south of the state of Rio Grande do Sul with about 340,000 inhabitants. According to the Instituito Brasileiro de Geografia e Estatística (IBGE - Brazilian Institute of Geography and Statistics), there are 408 urban household census tracts, which are arranged in a "spiral" from downtown to the districts. Of 404 census tracks including households, 40 were randomly selected for inclusion in the study, covering the city's entire urban area. We generated a random starting point for each track drawn for the selection of households to be included in the study. The first household was selected and then the next ones were systematically selected by skipping every seven households, up to 15 households were included in each census track. There were selected 600 households for the study. All residents aged 20 and 69 years were sampled, except those with severe physical or mental disabilities that would prevent them from answering the questionnaire.

We performed two estimates for the sample size. The sample size to assess the prevalence of soft drink consumption was estimated at 35.0% for a margin of error of 4.0%, 95% confidence interval, an addition of 10% for losses and refusals and a design effect of 1.5. It was estimated a sample of 901 respondents. For the assessment of the association between soft drink consumption and independent variables, the following parameters were used for estimating the sample size: 95% confidence level, 80% power, exposure prevalence ranging from 10% to 90%, prevalence ratio of 1.7, addition of 10% for non-respondents and 15% for controlling for confounders and a design effect of 1.5. The estimated sample consisted of 990 respondents.

Information on demographic and socioeconomic characteristics and health and nutritional status were collected using a standard questionnaire with 100 questions. The variable skin color was reported by interviewer observation and socioeconomic status was classified according to the Associação Brasileira de Empresas de Pesquisa (Brazilian Association of Research Companies) criteria.

The outcome, i.e., regular consumption of non-diet soft drinks, was investigated through the following question: "In general, since the <Month> in the past year, how often did you have a non-diet soft drink?." The answer options were: (a) once or less than once a month; (b) two to three times a month; (c) once or twice a week; (d) three to four times a week; (e) five or more times a week. For the analysis, the outcome was dichotomized and positive respondents were those who reported consuming non-diet soft drinks five or more times a week (regular use). Consumption was evaluated over a 12-month period prior to the interview.

Both male and female interviewers aged 18 years or more with a minimum requirement of complete high school education attended theory and practical sessions of a 20-hour training program. Interviewers were consistently supervised during the fieldwork. The supervisors, who were physical education and physical therapy undergraduate students, reviewed the questionnaires and carried out quality control checks through re-visits to 25% of the sample. Data obtained from questionnaires were double entered using EpiInfo 6.0 and the analysis was conducted using Stata 9.0.

The crude analysis tested the relationship between the outcome and gender, age, skin color/ethnicity, socioeconomic status, smoking, leisure-time physical activity, nutritional status, regular consumption of fruits and vegetables (five or more times a week) and weekly consumption of snack foods (burgers and hot dogs) (once or more a week). The chi-square test was used for testing heterogeneity and linear trend. Multivariate analysis was performed through Poisson regression with robust variance. The sampling effect was taken into consideration in the analysis using Stata svy commands. The level of significance was set at 5%.

The study was approved by the Research Ethics Committee of the Escola Superior de Educação Física da Universidade Federal de Pelotas on 01/17/2008 (protocol No. 005/2008). Data were collected after respondents signed an informed consent form.

Of 514 households selected, 1,062 adult residents were eligible to participate in the study. Of them, 972 answered the questionnaire (nonresponse rate of 9.3%). The independent variable with most missing values was BMI as 87 respondents did not know their weight and/or height.

The study sample was representative of adults aged 20 to 69 years living in the city of Pelotas in view of the high proportion of respondents and low loss and refusal rate. One of the study limitations is that comparisons with results from other studies should be treated with caution due to different sampling and data collection procedures and frequency of use classifications. Reverse causality bias may be present in the association between frequency of non-diet soft drink consumption and nutritional status as obese overweight may modify their consumption because of their nutritional status. In addition, there may be recall error as the period of consumption studied was 12 months prior to the interview.

A fifth (20.4%) of the adults studied in Pelotas regularly consumed non-diet soft drinks. The design effects for both the census track and the household were very close to those obtained in the sample size estimation and controlled for in the statistical analyses.

Among current smokers the rate of non-diet soft drink consumption was significantly higher, which is consistent with other studies.5,11,15 This finding confirms the trend that a health risk behavior is associated with a range of other health risk behaviors.5,11

One possible explanation for weight gain resulting from overconsumption of sugar-sweetened beverages is different physiological effects of energy intake from solid and liquid foods on satiety. Thus, carbohydrates form liquid foods would promote a higher positive energy balance. Possibly because liquid foods cause less gastric distension and have faster transit time, the body would not properly "identify" the energy contained in these foods with incomplete compensation for energy consumed in liquid form.1,6

Contrasting with previous studies,11,15 no significant association was seen between regular consumption of non-diet soft drinks and physical inactivity in our study. However, this result should be treated with caution as these studies used different instruments and criteria for classification of physical activity levels.

Regular consumption of fruits and vegetables was inversely associated with that of non-diet soft drinks, especially in females. A similar association was reported by Marshall et al14 in U.S. children, by Figueiredo et al9 in adults in São Paulo and in young adults in Japan.23

In conclusion, the consumption of non-diet soft drinks in adults in Pelotas is high, especially among males, current smokers and those who eat snack foods every week and do not regularly consume fruits and vegetables. People should reduce their consumption of non-diet soft drinks as it is associated with increased energy intake of low nutrition foods and other unhealthy eating habits as well.

Factors associated with regular non-diet soft drink intake among adults in Pelotas, Southern Brazil Airton José RombaldiI, II; Marilda Borges NeutzlingIII; Marcelo Cozzensa da SilvaI, II; Mario Renato AzevedoI, II; Pedro Curi HallalI, II a recommends a reduction of at least one-third the current consumption of these foods as a strategy for healthy eating.b showed a significant increase in the consumption of soft drinks (400%) compared to the 1970s. The consumption of soft drinks may be even higher since the Family Budged Survey data included only consumption at home. The Telephone-Based Surveillance of Risk and Protective Factors for Chronic Diseases (Vigitel) 2007c showed that the rate of adults reporting regular consumption of soft drinks diet ranged from 21.0% in Aracaju, Northeastern Brazil, to 31.7% in Porto Alegre, Southern Brazil, and 38.4% in Macapá, Northern Brazil. The consumption rate was higher among men and decreased with age and education.d The level of physical activity during leisure time was assessed using the long version of the International Physical Activity Questionnaire (IPAQ).3 A cutoff of 150 minutes per week was set to classify individuals as physically active or inactive.3 Nutritional status was evaluated using body mass index (BMI), which was calculated based on self-reported weight and height and classified according to WHO criteria.20 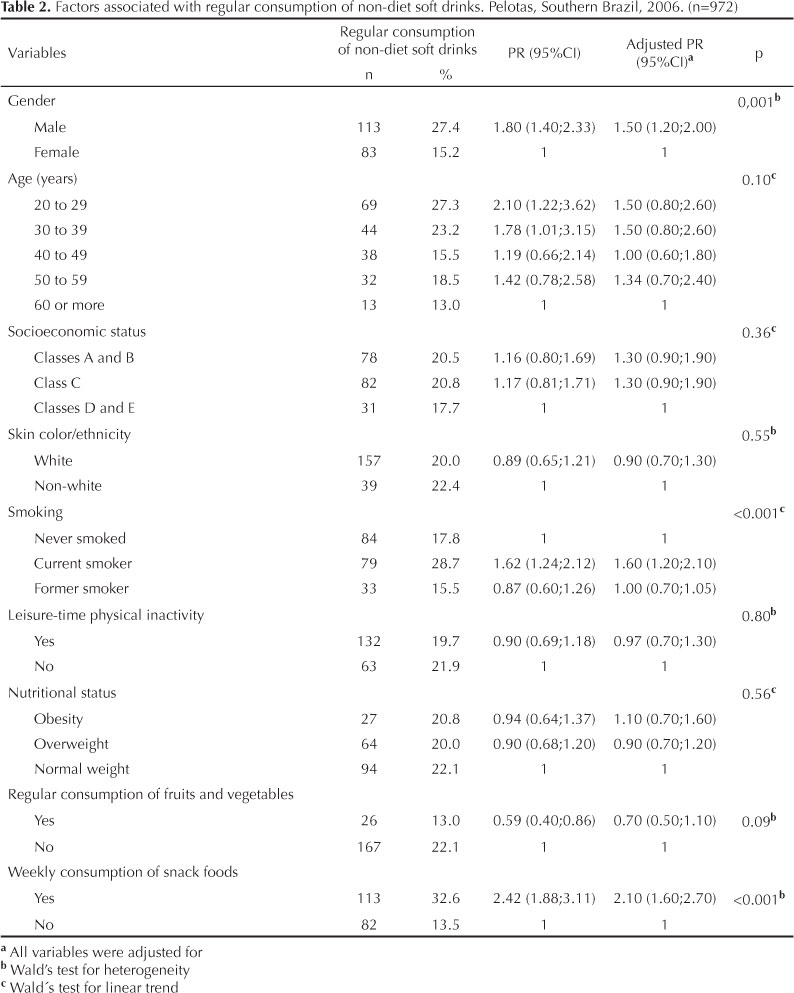 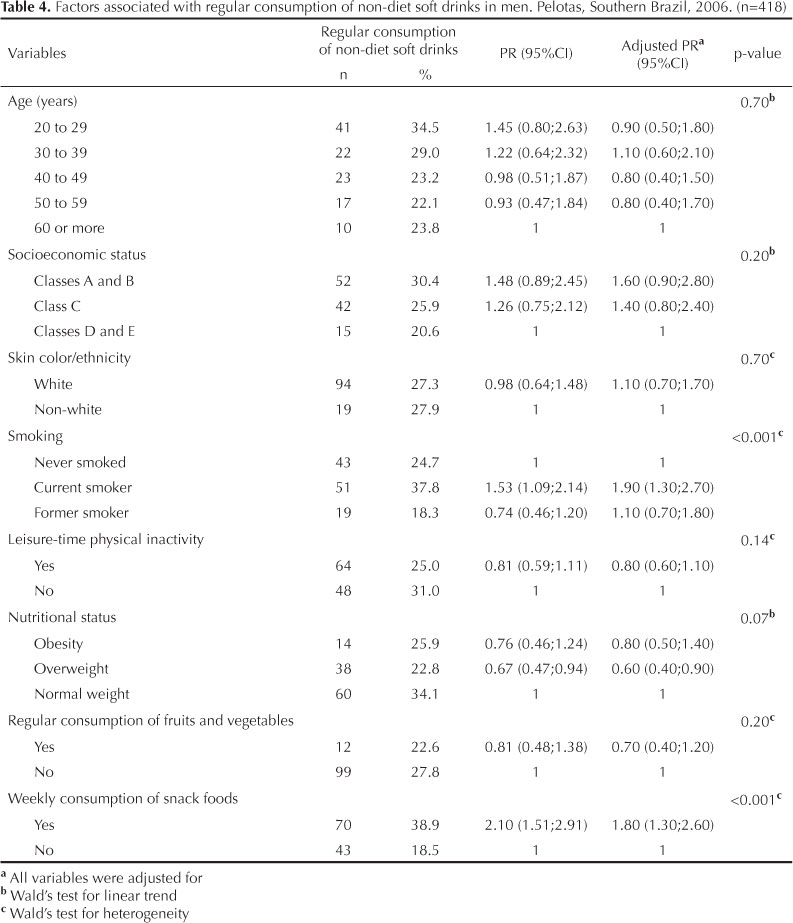