The present work sought to determine if the inclusion of guarana powder in the diets of lab-reared males of C. capitata would improve their sexual performance and thus potentially increase the effectiveness of SIT.

The first group received a diet based on yeast extract + sucrose (1:3) – the diet regularly used in maintaining the adults of these populations (Silva Neto et al., 2012Silva Neto, A.M.; Dias, V.S.; Joachim-Bravo, I.S. 2012. Reproductive behavior of Ceratitis capitata Wiedemann (Diptera: Tephritidae): effect of males size on mating success. EntomoBrasilis 5: 190-197 (in Portuguese, with abstract in English).) – and referred to hereafter as the basic diet. The second group received the basic diet but with the addition of guarana powder (3 % vol/vol). On the sixth day, 10 male flies from each dietary group were placed together with 10 five-day-old lab-reared virgin females (fed on basic diet) in a screen-mesh cage (68 × 68 × 90 cm) containing a small pitanga tree (Eugenia uniflora) approximately 60 cm tall. Each group of males was encased in tulle to prevent them moving and marked on the dorsal region of the thorax with a spot of non-toxic ink for identification. Observations of mating behavior were performed from 07h00-12h00, and each copulating pair was gently removed from the cage. The latency time for copulation (the time from the release of the individuals into the cage at the beginning of the experiment until the beginning of copulation), as well as copulation duration (the time from the insertion of the adeagus to the moment the flies separated) were recorded. The experiments were undertaken under controlled laboratory conditions (temperature 25 ± 1 °C, 70 % relative humidity, and an illumination regime of 1500 lux from a fluorescent light on a 12:12 L:D cycle). Fifteen replicates were performed.

Experiment 2: Lab-reared males fed on a diet of yeast extract + sucrose (1:3) enriched with guarana powder (3 % vol/vol) were tested for their sexual competitiveness in relation to wild males (obtained from infested Terminalia cattapa fruits) that were fed on the basic diet after emergence (without added guarana powder). The sexual competition conditions followed those used in experiment 1, with a number of modifications. Tests were conducted in field cages (230 × 150 × 230 cm) containing a pitanga (Eugenia uniflora) bush to simulate the natural environment. Twenty males from each group (previously marked with non-toxic paint) were liberated together with 20 wild females that had been fed on a basic diet. In this experiment, the wild males and wild females were 15 days old due to their longer sexual maturity; the laboratory males used were six days old, as in the previous experiment. All of the flies were fed with their respective diets until the day before initiating the mating competition tests. Five repetitions were performed. In a previous experiment, sexual competitiveness was compared for males reared in laboratory, fed with basic diet (sugar + yeast extract - 3: 1), and wild males also fed with the basic diet, in field cages. In that experiment, wild females chose to mate with significantly more wild males (at least twice more) than lab-reared males (unpaired t-test; p < 0.0001) (Aquino and Joachim-Bravo, 2014)Aquino, J.C.; Joachim-Bravo, I.S. 2014. Relevance of male size to female mate choice in Ceratitis capitata (Diptera: Tephritidae): investigations with wild and laboratory-reared flies. Journal of Insect Behavior 27: 162-176.. This experiment was used as reference for comparison of the new data we present here, since it used the same lineage flies and the same methodology and laboratory conditions. In order to test the influence of guarana-diet on the length of the male calling behavior (the first step of a sequence of behavioral courtship units, in which the male releases a pheromone drop by eversion of the anal epithelium and flaps its wings to aid dissemination), a complementary experiment was performed. Sexually mature wild males fed with or without guarana-diet (one of each group) were painted with different colors and placed in glass boxes (90 × 90 × 70 mm) for observation during 10 min to compare the duration of calling behavior between them. The experiment was conducted in the morning with 10 replicates.

Data analysis: Sexual competitiveness, mating latency, copulation duration, and calling behavior tests were compared between guarana-fed and control males, using the Student T-test, after evaluating the data for variance normality and homogeneity. The nonparametic Mann-Whitney test was used when these assumptions were not met.

Experiment 2: In competitive experiments between lab-reared and wild males, the lab-males maintained on the guarana diet had greater mating success than wild males fed with the basic diet (T-test, t = 2.144; p < 0.05) (Figure 2). The results were based on minimum replicates necessary to allow the t-test, due to the experiment’s limitations (the experiment was conducted under field conditions with the use of a large number of wild C. capitata, which are difficult to obtain). 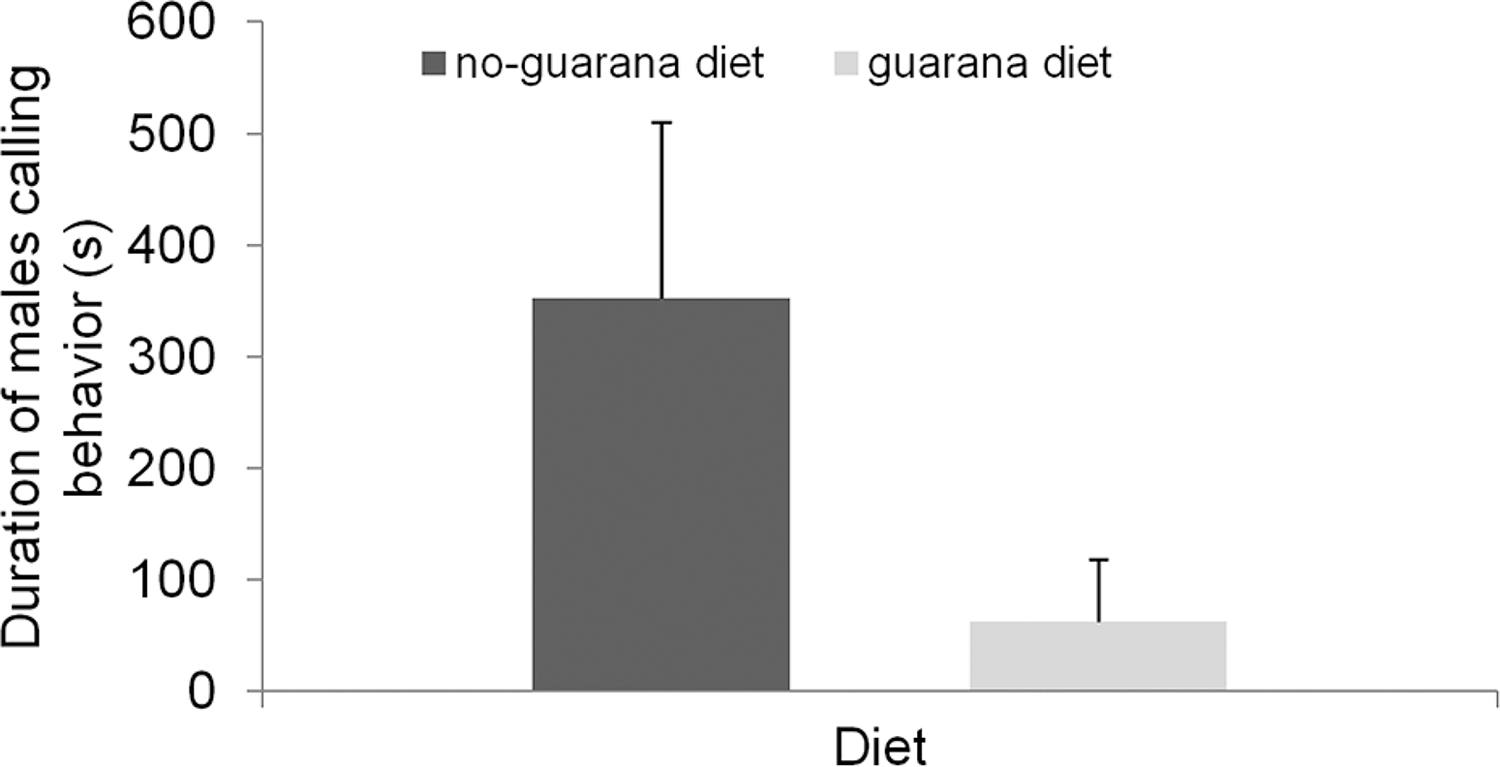 The addition of guarana powder improved the sexual performances of lab-reared C. capitata males, as they showed greater mating success with wild females – including their preference over wild males. Previous research done by our group using the same medfly strain (wild flies fed with basic diet vs. lab-reared fed with basic diet) and about the same time (Aquino and Joachim-Bravo, 2014Aquino, J.C.; Joachim-Bravo, I.S. 2014. Relevance of male size to female mate choice in Ceratitis capitata (Diptera: Tephritidae): investigations with wild and laboratory-reared flies. Journal of Insect Behavior 27: 162-176.) had shown that wild male fruit flies tend to be more successful at mating than lab-reared males – even when the physical characteristics of the lab-reared males appeared to be more favorable. These experiments indicated that although lab-reared males demonstrated characteristics that would otherwise make them more favorable to females (such as having larger body sizes (Anderson, 1994Anderson, M. 1994. Sexual Selection. Princeton University Press, Princeton, NJ, USA.; Anjos-Duarte et al., 2010Anjos-Duarte, C.S.; Costa, A.M.; Joachim-Bravo, I.S. 2010. Sexual behaviour of the Mediterranean fruit fly (Diptera: Tephritidae): the influence of female size on mate choice. Journal of Applied Entomology 1: 1-7.)), wild males were more successful at copulations when present.

The reasons for the success of added guarana to the diets of lab-reared males still need to be more closely examined from the physiological and behavioral points of view. The results suggest that the addition of guarana powder to the males’ diet should contribute to their mating success but not by dint of duration of calling behavior. Another interesting result that must be analyzed in further studies concerned the greater duration of copula in guarana-fed males. Although these results cannot be fully explained yet, it is conceivable that the high concentration of caffeine in guarana powder contributed to the males' mating success. One hypothesis is that males fed on a guarana diet could be more agile to “fight” in lek and could have greater ability to reach the most interesting points of the tree. The data about mating success obtained here were similar to the results obtained by Arita and Kaneshiro (1985)Arita, L.H.; Kaneshiro, K.Y. 1985. The dynamics of the lek system and mating success in males of the Mediterranean fruit fly, Ceratitis capitata (Wiedemann). Proceedings of the Hawaiian Entomological Society 25: 39-48., who reported the mating success of males obtained from coffee berries (also containing high caffeine levels), although the fruits had been provided during the larval stage in their experiments instead of a food supplement for adults, as reported in the present study. The authors suggested that coffee-fed males could achieve the best positions in lek and could be more chosen by females. Further studies concerning courtship behavior will be performed to investigate the reasons for the mating success of males fed on the guarana diet.

The sexual competitiveness of sterile, mass-produced C. capitata fruit flies was improved by adding natural stimulants to their diets, and this utilization of guarana powder may represent a new and viable option for increasing SIT effectiveness for medfly control in Brazil – and a viable alternative to expensive imported products such as methoprene.

Figure 1   – Number of mated males fed on a basic diet with or without guarana powder). Bar heights represent means (+ SD = standard deviation; n = 15), (T-test; p < 0.0001). All flies used in this experiment were derived from a laboratory strain and females used were fed with basic diet without guarana.