Proline in the root and leaf tissues was extracted and analyzed according to the method of Bates et al. (1973). Fifty milligrams of fresh material was ground with liquid nitrogen in a mortar. The homogenate powder was mixed with 1 mL aqueous sulfosalicylic acid (3 % w/v) and filtered through filter paper (Whatman #1, England). The extracted solution was reacted with an equal volume of glacial acetic acid and ninhydrin reagent (1.25 mg ninhydrin in 30 mL glacial acetic acid and 20 mL 6 M H3PO4) and incubated at 95 °C for 1 h. The reaction was terminated by placing the container in an ice bath. The reaction mixture was mixed vigorously with 2 mL toluene. After cooling to 25 °C, the chromophore was measured by spectrophotometer (HACH DR/4000; Model 48000, HACH Company, Loveland, Colorado, USA) at 520 nm using L-proline as a standard.

Chlorophyll a (Chla), chlorophyll b (Chlb) and total chlorophyll (TC) content, were analyzed following the methods of Shabala et al. (1998) and total carotenoid (Cx+c) concentrations were assayed according to Lichtenthaler (1987). One hundred milligrams of leaf material was collected and placed in a 25 mL glass vial along with 10 mL 95.5 % acetone, and blended using a homogenizer. The glass vials were sealed with parafilm to prevent evaporation, and then stored at 4 °C for 48 h. Chla and Chlb concentrations were measured using a UV-visible spectrophotometer at 662 nm and 644 nm wavelengths. The Cx+c concentration was also measured by spectrophotometer (HACH DR/4000; Model 48000, HACH Company, Loveland, Colorado, USA) at 470 nm. A solution of 95.5 % acetone was used as a blank.

Proline content in flag leaf of water-deficit stressed plant was increased (p < 0.01) and higher than that in controlled plant for 1.3-3.5 folds. For example, proline in AA11 and CC15 grown under water deficit stress was accumulated for 3.5 and 3.4 folds, respectively when compared with those in well-water condition (Figure 1). Relative water content (RWC) in the flag leaf of mutant rice lines dropped in plants exposed to water deficit stress (Table 1). The reduction of RWC in AA16 and CC15 lines of mutant rice was 15.4 % and 14.6 % when subjected to water deficit stress. A positive correlation between RWC and chlorophyll content was demonstrated (Figure 2). 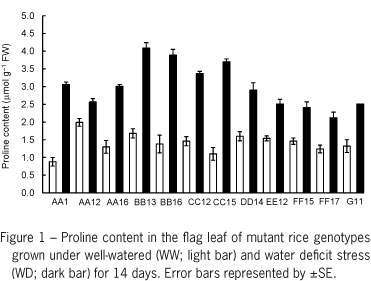 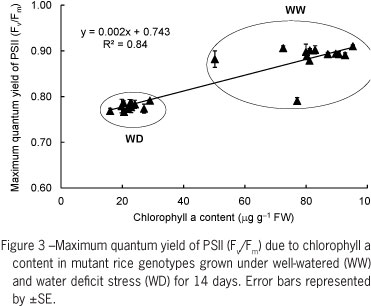 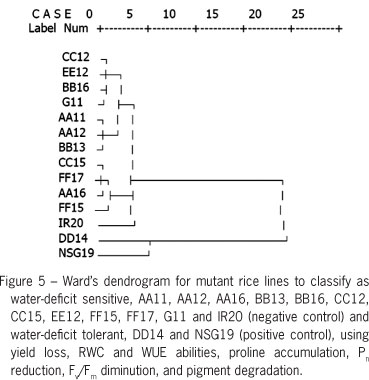 Proline content in the flag leaf blade increased depending on the reduction of RWC in the leaf tissues. Proline accumulation in the rice crop has been well established as an effective indicator of plant responses to water deficit stress. For example, proline content in PT1 and IR20 (water deficit sensitive) peaked in plants subjected to severe water deficit (7 % SWC) and was higher than in the tolerant cultivars (KDML105 and NSG19) (Cha-um et al., 2010). Similarly, proline in the leaf tissues of drought sensitive, CR203 (3.12 times) is accumulated higher than in drought tolerant cultivars, DR2 (1.41 times) and Cuom (2.06 times), when plants are subjected to water deficit stress (Hien et al., 2003). In contrast, P5CR and P5CS genes in proline biosynthesis in drought tolerant (Ca/H680) are up-regulated resulting in enriched proline contents greater than those in drought sensitive (Ca/H148) when exposed to drought stress (Parida et al., 2008). So, proline accumulation in rice crop responses to drought stress is still unclear and unsuitable to play a critical role as good indicator. Relative water content (RWC) in mutant lines of rice had a similar decreasing trend when subjected to water deficit stress. For some rice lines (AA16 and CC15), RWC in the flag leaf tissues was maintained for 84.6 % and 85.4 %, respectively when exposed to water deficit stress. In Gangyon 527, Yixiangyou 9 and Gangyou 188 cultivars of rice, RWC in the leaves decreased depending on a degree of water deficit stress (Wang et al., 2010). In addition, the RWC in drought tolerant Ca/H 680 was maintained at higher levels than that in drought sensitive Ca/H 148 when subjected to drought conditions (Parida et al., 2008). However, only RWC in the leaf tissues is inappropriate to make a decision for the drought tolerance in rice cultivar (Pantuwan et al., 2002; Jongdee et al., 2006).

A reduction of RWC in the flag leaf was positively related to pigment degradation. In the present study, Chla and TC degradation percentage in "DD14" mutant lines in water deficit condition was lower than other lines. Similar results are presented in NSG19 and KDML105 grown under water deficit stress (Cha-um et al., 2010). Also, the photosynthetic abilities i.e. chlorophyll fluorescence and net photosynthetic rate (Pn) in drought tolerant genotype (NSG19) are also better than in drought sensitive genotype (IR20). For example, the Pn in the flag leaf of NSG19 was reduced in 19.5 % whereas Pn of IR20 was reduced in 64.3 % (Cha-um et al., 2010). In this investigation, two rice genotypes were chosen as positive (drought tolerance) and negative control (drought sensitive). Moreover, relative transpiration in NSG19 (0.35) and IR20 (0.48) quite differ when plants are subjected to water deficit (PEG-induced -0.5 MPa) for 6 days (Cabuslay et al., 2002).

In conclusion, chlorophyll a, total chlorophyll, total carotenoids and fertile grain traits of mutant rice genotypes "DD14" in response to water deficit stress were superior to those in other cultivars and can be played as multivariate criteria for water-deficit tolerance classification. Mutant rice line "DD14" was identified as water deficit tolerance using Ward's cluster analysis. The water-deficit tolerant line of rice from this investigation should be further verified in the rainfed paddy field.

To Mahidol University, as a funding source (Grant code A04/1/2553), and to Jonathan Shore, for English grammatical proofing.