Histological responses of the intestine are key for evaluating nutritional value of feed ingredients, since the organ is not only the chief site of feed digestion and nutrient absorption but also plays an important immunological function. Histomorphological alterations were evaluated in the intestine of juvenile striped catfish, Pseudoplatystoma fasciatum, fed diets containing 0 (control), 10 or 20% inclusion of lyophilized bovine colostrum (LBC), as source of protein or bioactive peptides, for either 30 or 60 days. Fish fed 20LBC presented at 60d a distinct pattern of macrophages and, some of them, higher number of vacuoles in rectum mucosa. The thickness of the muscle layer (TML) in fish fed diets with LBC was higher in the first portion of medium intestine than fish fed 0LBC. All fish presented significant increase of TML in the second portion of medium intestine along feeding period, but fish fed 20LBC had smaller values of TML than those of fish fed 0 and 10LBC which might be related to the higher intestinal coefficient found for this group. The TML of rectum was higher just for fish fed 10LBC. Dietary LBC altered morphometrical features of juvenile striped catfish intestine and possibly induced inflammatory reaction in the rectal mucosa, as a function of level of inclusion, feeding period and segment of intestine analyzed. 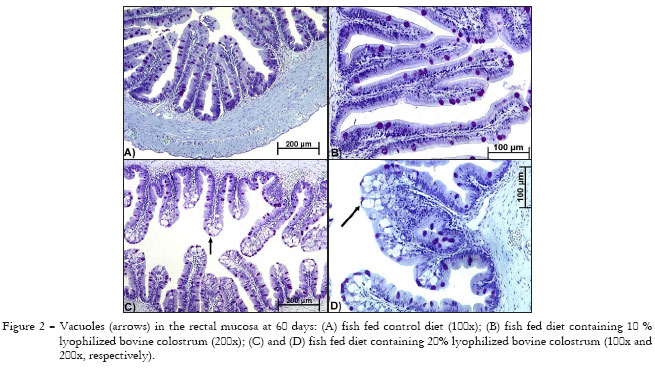