CONTEXT AND OBJECTIVE: Excessive gestational weight gain is related to many complications (both maternal and fetal), such as macrosomia. The most common complications in macrosomic fetuses include: increased risk of intrauterine death, need for intensive care, fractures, neonatal hyperbilirubinemia, paralysis of the brachial plexus and obesity in childhood and adulthood. The aim of this study was to evaluate the association between gestational and fetal weight gain and the incidence of macrosomia in two maternity hospitals.

METHODS: This was a cohort study on 200 healthy pregnant women with normal body mass index, divided into two groups: one with normal weight gain and the other with excessive weight gain during pregnancy.

Weight gain during pregnancy has always been a matter of great concern for most women and obstetricians. This concern exists because gestational weight gain is related to many complications, both maternal and fetal.1,2 Macrosomia is a major fetal complication, consisting of cases of infants born weighing more than 4,000 g, regardless of the gestational age.3 This large weight is associated with complications for both the mother and the child. The most common complications in macrosomic fetuses include: increased risk of intrauterine death, hypertrophic cardiomyopathy, need for intensive care, shoulder dystocia, humeral and clavicle fractures, meconium aspiration, hypoglycemia, neonatal hyperbilirubinemia, paralysis of the facial and brachial plexus and obesity in childhood and adulthood.4-7 For mothers, the most common complications include: increased risk of cesarean section, cephalopelvic disproportion, prolonged labor, soft-tissue lacerations and postpartum hemorrhage.4,6

The incidence of fetal macrosomia ranges from 4.8% to 6.7% in Brazilian studies and from 12.8 to 37.4% in studies worldwide.8-11 This high incidence may be associated with several factors, such as advanced maternal age, multiparity, pregestational overweight and obesity, short stature, excessive gestational weight gain and gestational diabetes.12 Despite the numerous studies on the relationship between maternal and fetal weight gain conducted in developed countries, data in developing countries is scarce.13

The objective of this study was to investigate the association between gestational weight gain and fetal birth weight and the incidence of macrosomia, among pregnant women with an initially normal body mass index (BMI).

Data were gathered between January 2006 and December 2008. The study design was of cohort type, matched according to age. The study included 200 pregnant women who had been hospitalized for childbirth in two public maternity hospitals in Goiânia, Brazil: one of them secondary and the other, tertiary. The women were divided into two groups, of 100 individuals each. The group with excessive weight gain was composed of women who had gained 16 kg or more, while the group of normal weight gain consisted of women whose weight gain had been ≥ 11.5 kg and < 16 kg during the same period.

To select the subjects, the researcher visited the two maternity hospitals every second day and analyzed the records of the hospitalized women. Those who met the inclusion criteria were interviewed before they completed 48 hours of puerperium. Information regarding the women's pregnancies, such as gestational weight before the 14th gestational week, final weight (after the 37th week), height, age and fetal birth weight were obtained from all delivery documents. Information regarding the puerperal women's dietary behavior, socioeconomic characteristics (education and income) and lifestyle were obtained from a face-to-face interview.

The sample size was calculated taking a confidence interval of 95% and test power of 80%. The expected frequency of individuals exposed to an excessively caloric diet in the control group (normal weight gain) was taken to be about 20%, while in the case group (excessive weight gain), the prevalence rate was taken to be four times greater. Therefore, it was stipulated that it would be necessary to interview 90 patients, divided into two groups of 45 each. Another 10% was added to account for possible losses, thus making up a total of approximately 100 patients required in order to identify this difference. However, because multiple factors have been correlated with weight gain, we decided to include twice the number of individuals, i.e. 200 women, in order to maximize the capacity of the multivariate analysis.

The puerperal women included in this study had been classified as eutrophic at the beginning of their pregnancies, in accordance with their pre-gestational BMI, which ranged between 18.5 kg/m2 and 24.9 kg/m2. They were aged between 20 and 40 years, and had their delivery between the 37th and 42nd gestational week. The gestational age was estimated based on the last menstruation period and the first trimester ultrasound examination. Women were excluded from the study if they were of indigenous ethnicity (due to different dietary behavior and lifestyles, and also because they are a minority in the city of Goiânia) and if, at any time during pregnancy, they presented any chronic hypertensive disease, diabetes, lupus, heart disease, preeclampsia or twin pregnancy.

All the puerperal women were informed about the objectives of the study and the procedures that would be performed. The subjects participated voluntarily and signed an informed consent form after being informed about the nature and objectives of the study. The study had previously been approved by the Research Ethics Committee of the Teaching Hospital of the Federal University of Goiás (Universidade Federal de Goiás, UFG), under number 063/2005.

The researcher interviewed the participants using a structured questionnaire, which contained questions regarding the women's social, economic, demographic and lifestyle characteristics, such as age (in completed years on the date of the interview), education (in completed years on the date of the interview), income (expressed in Brazilian reais and as minimum salaries), number of pregnancies, parity (number of children that had been born), abortions/miscarriages, birth interval (time between the date on which the last child was born, taking into account miscarriages, and the date of the last period), date of the last period (in months), drug use, smoking during pregnancy and fetal birth weight (the weight noted on the child's or mother's medical record). Fetal birth weight was classified as follows: low birth weight (< 2,500 g); normal weight (≥ 2,500 g and < 4,000 g); and macrosomia (≥ 4,000 g).

The data gathered were typed and filed as spreadsheets using Microsoft Excel 2003, and were analyzed using the Statistical Package for the Social Sciences (SPSS) version 17.0. The Kolmogorov-Smirnov test was performed to evaluate whether the numerical variables presented normal distribution, and the distribution was considered to differ from the normal curve when P < 0.05. For variables with normal distribution, the mean, standard deviation and Student's t test were used. For variables with distribution differing from normal, the median, interquartile range and Mann-Whitney test were used. The frequency and the chi-square test (χ²) or Fisher's exact test were used for categorical variables. The independent numerical variable (maternal weight gain) was correlated with fetal birth weight through Spearman's rank correlation coefficient, since gestational weight gain presented a distribution differing from the normal curve.15

Table 1 presents the subjects' ages, education levels, economic characteristics (per capita income), reproductive behavior (number of pregnancies, parity, abortions and birth interval) and lifestyles (duration of smoking habit and number of cigarettes per day). None of the patients reported using drugs during pregnancy. Table 2 presents the frequency of miscarriages and smoking during pregnancy in the study population. The study groups were considered to be similar in relation to these factors.

The anthropometric data are presented in Table 3. The variables of total weight gain and final BMI presented significant differences (P < 0.01), as expected, because the postpartum women were divided according to their weight gain for their participation in the study (excessive weight gain, ≥ 16 kg, and normal weight gain, from ≥ 11.50 kg to < 16 kg).

Fetal weight at birth was also correlated with total weight gain during pregnancy through Spearman's rank correlation coefficient (0.19; P < 0.01), which is presented in Figure 2.

Other studies have found a relationship between fetal macrosomia and other factors associated with pregnancy, such as parity.19,20 Women with many children were found to have a greater chance of having macrosomic babies than nulliparous women did. In our study, the number of pregnancies and parity in the cohorts were similar.

The issue of dietary behavior during pregnancy remains a very complex subject, with no consensus up to now. A study conducted by Kramer et al. in 1998 showed that, during pregnancy, the quality of the food consumed is more important than the quantity.20 Another study by Moses et al. in 2006 found that women who had diets with high glycemic levels had a higher incidence of babies with macrosomia.21 The study by Denguezli et al. in 2009 showed that carbohydrate consumption higher than the recommendations was related to higher fetal birth weight.15 Therefore, dietary behavior during pregnancy is a subject that calls for further studies in order to reach a consensus and hence enable improvement of the level of guidance provided to pregnant women, and consequently avoid the undesired effects of excessive weight gain. We believe that it is possible to undo the undesirable association between weight gain and macrosomia through quality prenatal care, in which women are given guidance regarding healthy dietary behavior with appropriate quantities.

In the present study, it was found that there was a direct relationship between maternal weight gain and fetal birth weight, i.e. mothers who gained more weight during their pregnancy had heavier babies, with higher incidence of macrosomia.

Sources of funding: None 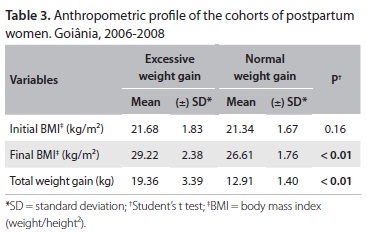