The last-instar nymph of Alcmeone robustus (Butler, 1877) (Membracidae, Darninae, Darnini) is described and illustrated, and some biological and behavioral notes are provided. The nymphs were observed on Pera sp. (Euphorbiaceae) in the locality of Jacareí, state of São Paulo, Brazil, until they became adults. The newly emerged adults, male and female, are also briefly re-described.

The last-instar nymph of Alcmeone robustus (Butler, 1877) (Membracidae, Darninae, Darnini) is described and illustrated, and some biological and behavioral notes are provided. The nymphs were observed on Pera sp. (Euphorbiaceae) in the locality of Jacareí, state of São Paulo, Brazil, until they became adults. The newly emerged adults, male and female, are also briefly re-described.

In his treatment of the Smiliinae, Butler (1877), described several species of Ceresa Amyot & Serville, 1843. In their description of C. robusta, based on a female specimen, the authors pointed that "... the form of the pronotum differs considerably from all described species". Despite this comment, the taxonomic position of C. robusta was maintained until recently, when Andrade (1999), upon examining the type specimen in the collection of The Natural History Museum (BMNH), London, concluded that it actually belongs in Darninae. He then transferred it to Alcmeone Stål, 1876, and the species name became A. robusta (Butler, 1877). He also discovered that A. sinuata, described by Fonseca & Diringshofen (1974) from a single male, was a junior synonym with A. robusta. McKamey (1998) catalogued 10 valid species in Alcmeone Stål, but the immature stages, biology and behavior of the species of the group have not been documented in the literature.

In the present paper, we describe the last-instar nymph of Alcmeone robustus (Butler, 1877) (corrected spelling for the species-group name), and provide some biological/behavioral notes on the species, including observations on the newly emerged adult males and females.

The Campus Villa Branca of Universidade do Vale do Paraíba (UNIVAP), is located in the municipality of Jacareí, state of São Paulo, Brazil (23°16'12"S, 45°56'38"W), where there is a small remnant of Atlantic Forest in full regeneration, maintained under the protection of the municipality, together with UNIVAP. The city of Jacareí is located in the valley of Rio Paraíba, between São Paulo and Rio de Janeiro, the two largest cities in Brazil. The valley includes highly industrialized regions as well as areas of preserved forests along the mountain ranges of Serra do Mar and Serra da Mantiqueira, besides.

Late-instar nymphs of A. robustus were observed on Pera sp. (Euphorbiaceae). Six nymphs were found during the period of observation (2008-2012). Two individuals (last-instar) were collected, brought to the laboratory, and maintained on a small branch cut off from the host plant and placed in a recipient with water, to keep it turgid. The attempt, however, failed and the nymphs did not survive until the adult stage. The other nymphs were accompanied directly on the host plant, using a voile surrounding the branch to protect the nymph from predators. Two adults, male and female, emerged. Many photographs were taken with a Canon® PowerShot SX101S and also with Dino Capture® connected to a stereo-microscope Hund Wezlar®.

Remarks. The main characteristics of the last-instar nymph are the large pronotal cylindro-conical process projected obliquely forward, with bifurcated apex (Fig. 4), and the presence of scoli on the vertex (Fig. 5), mesothorax, and segments of abdomen, including pygofer (Figs 1-3).

One individual of fourth instar nymph was also observed. The morphology is very similar to that of the fifth instar, as described above, just smaller and the scoli is slender, relatively longer.

Behavior. The nymphs are solitary and are not attended by ants. They are very mimetic, green in color, hairy, immobile, resembling part of the plant, making them difficult to locate and collect. Almost always, near one nymph, or on the same branch, an adult was found. After this observation, other nymphs were located more easily. On the plant, the nymphs prefer the lower branches, those in shadowed places, and at the slender portion near the apex. When touched, they hide, moving rapidly to the other side of the branch.

Before transforming into an adult, the nymph usually goes to the undersurface of a leaf, or underside of the branch, inserts the stylets into the plant, and stays still until the transformation occurs. The cuticle opens dorso-longitudinally, along the ecdysial line, and the imago emerges, starting from the head. The exuvia (Fig. 7) remains fixed to the branch by the stylets, which anchor the body firmly. Thus it does not fall down even with the legs hanging free during emergence. The newly emerged adult is colorless, and stays still for some minutes until the cuticle is hardened and acquires the permanent color.

The adults are also solitary, not attended by ants. One individual is usually found close to a bifurcation point of a branch. The adults and nymphs were found on Pera sp. (Euphorbiaceae) (Figs 11 and 12). Adult (Figs 6 and 8-10). The adult, in nature (Fig. 6), is light green, with suprahumeral horns, latero-inferior band extended from their bases to humeral angles, and apex of posterior process, dark-brown. Forewings brown at base, with large smoky area close to apex and costal margin.

Remarks. Butler (1877) and Fonseca & Diringshofen (1994) presented detailed descriptions of the female and for male, respectively. Therefore, we just complemented their description. Males and females are morphologically identical, differing only in their sizes, the females are a little larger with suprahumeral horns longer. The conspicuous scoli, observed in the last-instar nymph, almost disappear in the adult, remaining only as weak scars on the body: two very small, circular, smooth, areas on dorsum of pronotum at each side of median carina, just after the suprahumeral horns (in Fig. 6, they can be observed as two small darkened areas). These scars correspond to the two apical scoli of the pronotal process of the nymph. These structures were mentioned by Fonseca & Diringshofen (1974) in the description of A. sinuata, who also gave an illustration. The two protuberances located laterally near the base of the pronotal process of the nymph (Figs 4 and 5) originate the well developed suprahumeral horns of the adult. On the abdominal terga III-VI, the locations of the large scoli are represented by small circular shallow pits. 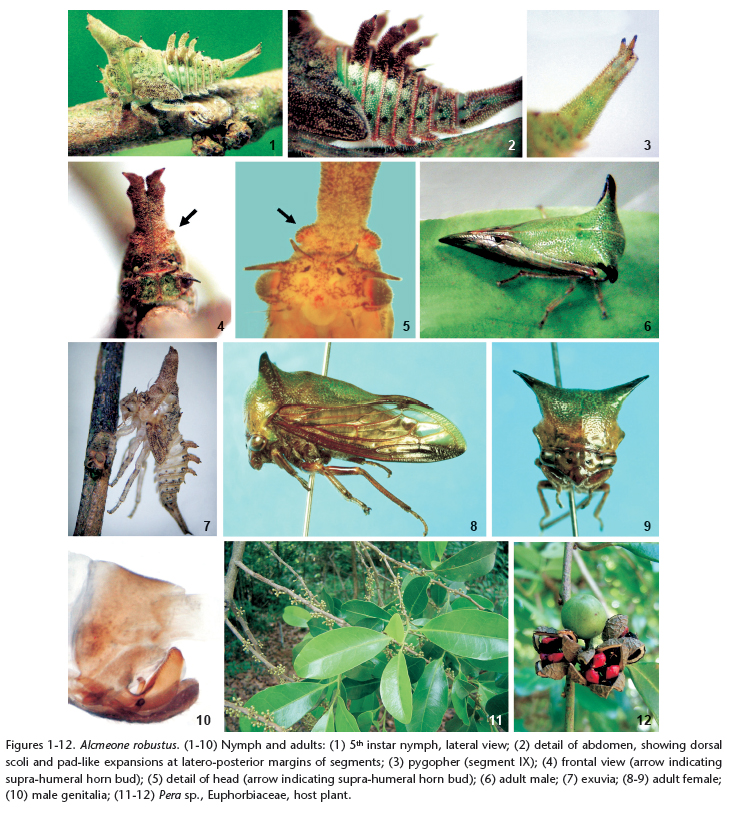