30-40% of cardiac resynchronization therapy cases do not achieve favorable outcomes.

This study aimed to develop predictive models for the combined endpoint of cardiac death and transplantation (Tx) at different stages of cardiac resynchronization therapy (CRT).

Prospective observational study of 116 patients aged 64.8 ± 11.1 years, 68.1% of whom had functional class (FC) III and 31.9% had ambulatory class IV. Clinical, electrocardiographic and echocardiographic variables were assessed by using Cox regression and Kaplan-Meier curves.

The cardiac mortality/Tx rate was 16.3% during the follow-up period of 34.0 ± 17.9 months. Prior to implantation, right ventricular dysfunction (RVD), ejection fraction < 25% and use of high doses of diuretics (HDD) increased the risk of cardiac death and Tx by 3.9-, 4.8-, and 5.9-fold, respectively. In the first year after CRT, RVD, HDD and hospitalization due to congestive heart failure increased the risk of death at hazard ratios of 3.5, 5.3, and 12.5, respectively. In the second year after CRT, RVD and FC III/IV were significant risk factors of mortality in the multivariate Cox model. The accuracy rates of the models were 84.6% at preimplantation, 93% in the first year after CRT, and 90.5% in the second year after CRT. The models were validated by bootstrapping.

We developed predictive models of cardiac death and Tx at different stages of CRT based on the analysis of simple and easily obtainable clinical and echocardiographic variables. The models showed good accuracy and adjustment, were validated internally, and are useful in the selection, monitoring and counseling of patients indicated for CRT.

Figure 1   Kaplan-Meier survival curve of the variables with independent value in the multivariate Cox analysis, compared by using the log-rank test, with the construction of the ROC curve, an area under the curve (AUC) of 0.81, sensitivity of 61%, specificity of 89%, and accuracy of 84%. At the bottom right, risk model, being a low risk of cardiac mortality/Tx the absence of the three variables, furosemide> 80 mg/day, right ventricular dysfunction, and ejection fraction (EF) < 25% or presence of one of them.

Figure 2   Kaplan-Meier curve of the variable hospitalization due to congestive heart failure (CHF), which, associated with right ventricular dysfunction and use of high doses of diuretics, formed the predictive model of cardiac death/Tx at time 2 (1st year). The absence of the three variables or the presence of only one (low risk) indicates an event‑free rate in 30 months of 98%. At the top right, the ROC curve with an area under the curve (AUC) of 0.91, sensitivity of 76.4%, specificity of 96.3%, and accuracy of 93%.

Figure 3   A: ROC curve of the model at time 3 (2nd year), with the variables right ventricle (RV) dysfunction and functional class (FC) III and IV compared with I and II, with an area under the curve (AUC) of 0.789, sensitivity of 40%, specificity of 98.4% and accuracy of 90.5%. B: Kaplan-Meier curve showing that the absence of the variables RV dysfunction and FC III / IV (Class A - low risk) indicates an event-free rate of 97.5% at 30 months. 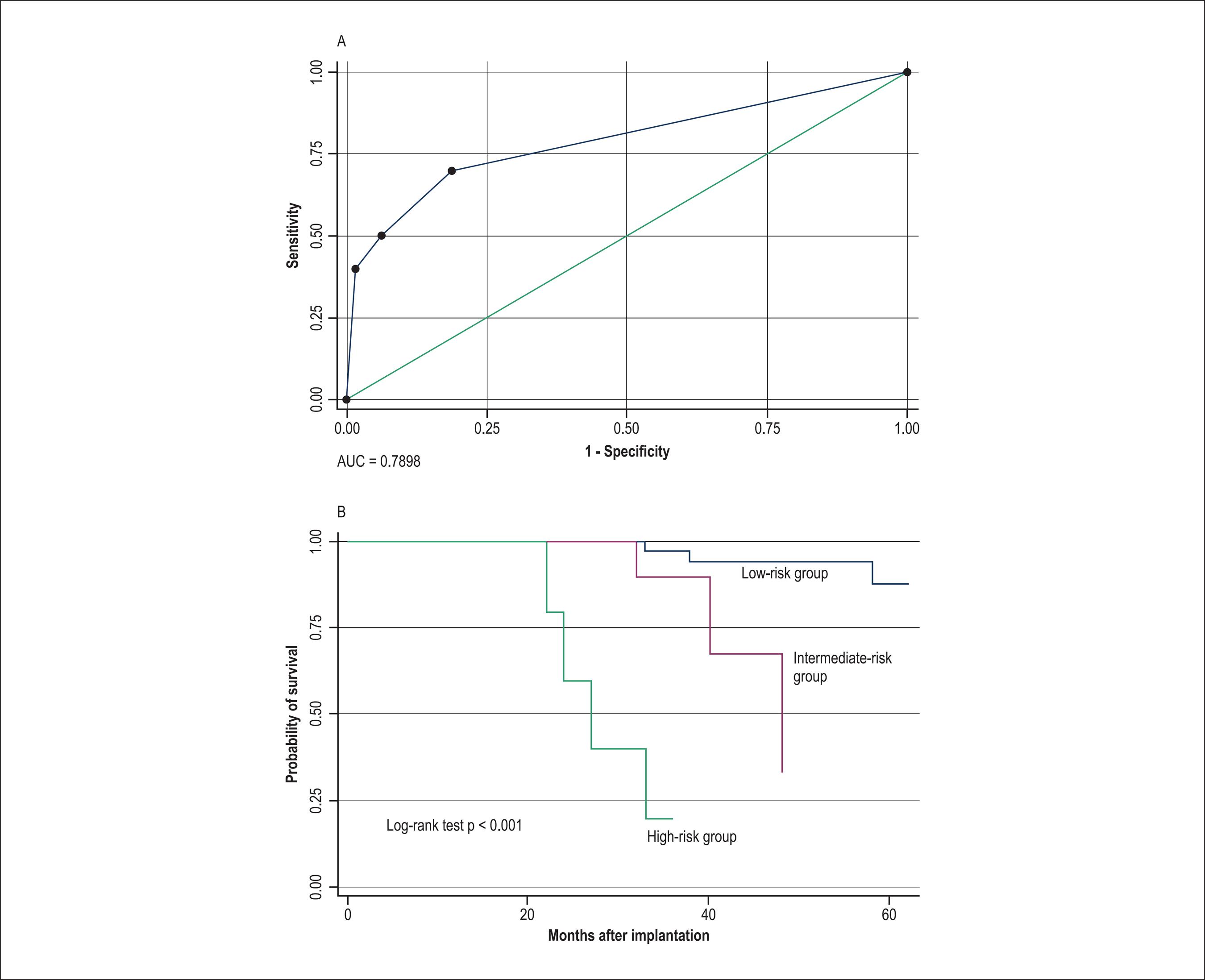